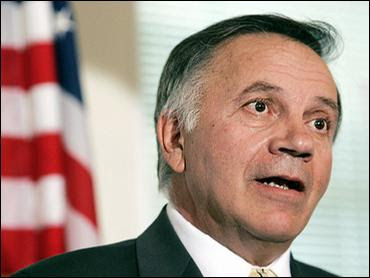 From an interview with The Evening Bulletin, presidential candidate Tom Tancredo, (R), Colorado:
The Bulletin: Speaking of the "do anything" mentality, why did the Republicans lose in 2006, and what needs to change if 2008 is to be a better year? Has that catalyst for change occurred?

I think we could have sustained ourselves, even with the corruption, even with the war, if we had a solid base. If people thought that we were dealing with corruption - that people were going to jail for doing bad things - I think the president could have rallied much more support in the country if he had a strong base in his own party, which he does not have. He has destroyed it. He has helped destroy the party. We are in a world of hurt because he has pushed issues like No Child Left Behind, like the Medicare Prescription Drug Plan - he has pushed huge spending plans to the detriment of the party. Pretty soon, you look out there and ask, "Where is your base?" Where are the people who are going to knock on doors? Then things start to go south. The war becomes a problem, corruption issues boil up, you've got nobody out there to rely on. That's why we lost. And today, if we don't build that base back, if people don't feel that they have a reason to be a Republican. I think it has to be about principled leadership. I hope I offer that, but I always say, "If I'm not your guy, I really hope you find someone whom you are excited voting for. I really do because that's what America needs."

WASHINGTON - It is gallows humor time for Republicans in Congress, where one lawmaker jokes that "there's talk about us going the way of the Whigs," the 19th century political party long extinct.

"That's not going to happen," Rep. Tom Davis, R-Va., hastens to add, although a little more than a year before the 2008 election, the major leading political indicators still point downward for a party abruptly turned out of power in 2006.

Fundraising for Republican campaign organizations lags. That is strikingly so in the House, where the party committee spent more than it raised in each of the past two months, reported only $1.6 million in the bank at the end of August and a debt of nearly $4 million.

Democrats reported $22.1 million in the bank and a debt of slightly more than $3 million.

Candidate recruitment has been uneven, particularly in the Senate, where Republicans must defend 22 of the 34 seats on the ballot next year. Democrats boast top-tier challengers for GOP-held seats in Colorado, Virginia, New Hampshire, Maine, Minnesota and Oregon.

Republicans have yet to put forward a prominent challenger for any Democratic-held seat, although an announcement is expected soon in Louisiana.

Additionally, nine Republicans in the House and three in the Senate have announced plans to retire. Some of those leaving are in midcareer, when a departure often signals pessimism about the prospects for regaining the majority. Democratic retirements total two to date — both are House members who are running for the Senate.

"The Democrats will continue to be the majority party in the House and Senate and Hillary Clinton will make history by being the first woman president" in 2008, predicts Rep. Ray LaHood, one of three Illinois Republicans to announce his retirement so far.