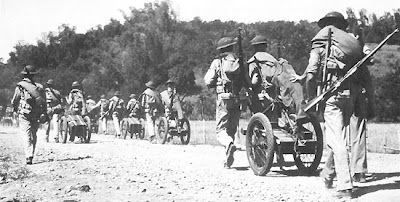 Ammunition moving to the front. How much did the little son of a bitch make and who helped him?

The Pentagon entrusted a 22-year-old previously arrested for domestic violence and having a forged driving licence to be the main supplier of ammunition to Afghan forces at the height of the battle against the Taliban, it was reported yesterday.

AEY, essentially a one-man operation based in an unmarked office in Miami Beach, Florida, was awarded a contract worth $300m (£150m) to supply the Afghan army and police in January last year. But as the New York Times reported in a lengthy investigation, AEY's president, Efraim Diversoli, 22, supplied stock that was 40 years old and rotting packing material.

"Much of the ammunition comes from the ageing stockpiles of the old communist bloc, including stockpiles that the state department and Nato have determined to be unreliable and obsolete, and have spent millions of dollars to have destroyed," the paper said.

The report on AEY was the latest instance of private firms securing lucrative defence contracts in Iraq and Afghanistan under the Bush administration's policy of privatising growing aspects of the military.

"Operations like this pop up like mushrooms after the rain," said Milton Bearden, a former CIA official who in the 1980s was in charge of arming Afghan rebel groups fighting the former Soviet Union.

"For the most part the US or coalition forces will stick with the Warsaw Pact weapons and munitions systems that were already being used by the Afghans or the Iraqis. There becomes an insatiable demand for certain munitions. Suppliers go all over the world sweeping out warehouses and you end up with boxes of junk and unstable gear if you are not careful."

The army suspended AEY from future contracts during the course of the investigation - although it continues to fill existing orders. The New York Times said Diversoli was unaware of the action, although he was to be notified yesterday.

Until then, however, Diversoli appears to have had a lucrative run. He told the newspaper his firm had won contracts worth at least $200m each year since 2004. AEY also supplied weapons to US agencies, and rifles to Iraqi forces.

In 2006, AEY was among 10 firms bidding on a contract to supply 52 kinds of ammunition for the Afghan security forces. But while his business was taking off, Diversoli was accused of violent behaviour involving two girlfriends and the parking attendant at his apartment building. In December 2006, Diversoli was charged with battery after beating up the parking attendant, according to the newspaper. Police recovered a forged driving licence from Diversoli's flat which led to a separate charge. He entered a programme for first time offenders to avoid trial.

AEY's contract was approved weeks later in January 2007, and Diversoli began scouring the globe for suppliers. Diversoli turned to Albania, which had large weapons dumps. However, the New York Times reported that the firm ended up paying for Kalashnikov rounds that were so obsolete that the US and Nato funded programmes to see them safely destroyed.

AEY also purchased 9 million cartridges from a Czech citizen who had been linked to illegal arms trafficking to Congo.

At first, the Pentagon defended its contractor. "AEY's proposal represented the best value to the government," the Army Sustainment Command wrote to the New York Times. Henry Waxman, the member of congress from California who heads the committee on government oversight, said yesterday he would conduct hearings into the contract next month.