The Democrats Face a Civil War in Pennsylvania 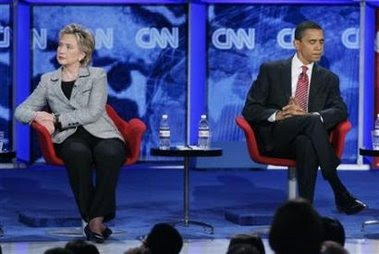 Obama’s failure to win Ohio and Texas and the upcoming battle for Pennsylvania spells big trouble for the Democrats. Pennsylvania is controlled by Democratic boss and Governor, Ed Rendell. Fast Eddy is a huge supporter of Hillary. Obama would normally have a tough time in most of the center counties of Pennsylvania as they are mostly Republican and ethnic white. Pennsylvania, without Philadelphia, is a red state.

Philadelphia is not popular in most of the state. Besides being crime ridden with awful and expensive schools, Philadelphia is majority black. Philadelphia is also a county. It cannot support itself without taxes from all the other counties. It is an economic drain on the state and is perceived as politically corrupt and a money sponge. It is a violent city with many no go areas and run by a new black major following eight years of an incompetent black major, John Street.

To win Pennsylvania, Clinton will have to work the part of the state that is not Philadelphia. This has a lot to do with the Democratic proportional sharing of delegates. The Pennsylvania race will only heighten racial, age, ethnic, gender, and class divisions already apparent in the state. This will have national implications.

The blacks already have gone to almost a 90% support for Obama. Hillary can do nothing to get their support. Many white voters will be uncomfortable with a black candidate that is so supported by black voters to the exclusion of a white candidate, Hillary. Hillary will win Pennsylvania but it will tear the Democrats apart.
______________________________

The scope of Hillary Clinton's latest resurrection can be appreciated only in light of the elaborate preparations that had been made for her expeditious burial. That she is very much alive can be attributed to her true grit but also to the revelation that Barack Obama is not a miraculously perfect candidate after all.

Assuming that Clinton would at best eke out a victory in Ohio on Tuesday to end her long losing streak, prominent Democrats were organizing a major private intervention. A posse of party leaders would plead with her to end her campaign and recognize Obama as the Democratic standard-bearer. To buttress this argument, several elite unelected superdelegates (including previous Clinton supporters) were ready to come out for Obama. Those plans went on hold Tuesday night.

Clinton's transformation of the political climate with her decisive victory in Ohio and unexpected narrow win in Texas coincided with Obama facing adversity for the first time in his magical candidacy, and he did not handle it well. The result is not only the prospect of seven weeks of fierce campaigning by the two candidates, stretching out to the next primary showdown April 22 in Pennsylvania, but also perhaps what Democratic leaders feared but never really thought possible until now: a contested national convention in Denver the last week of August.

By chance, this critical week for Obama began Monday with jury selection in the Chicago corruption trial of his former friend and fundraiser Tony Rezko. For the first time, the story of this political fixer's connections with the Democratic Party's golden boy spread beyond the Chicago media. In a contentious news conference, Obama was uncommunicative. He ended the session by walking out and announcing that eight questions were enough.

Less obvious than his Rezko performance but more disturbing to insiders was Obama's handling of the North American Free Trade Agreement.

With NAFTA having become an expletive in economically depressed northern Ohio, the two Democratic candidates competed with each other in pandering -- denouncing the trade agreement that was a jewel in President Bill Clinton's crown. The trouble began when Canadian television reported that Obama economic adviser Austan Goolsbee had visited Canada's consulate in Chicago to reassure officials there.

Old Democratic hands cringed when both Clinton and Obama in their Cleveland debate last month blithely advocated the (dangerous) renegotiation of NAFTA. They were really disturbed by what happened next. Obama denied the Goolsbee mission, then had to back down after a Canadian diplomat's memo confirmed the visit. A longtime Democratic political operative, not aligned with either Obama or Clinton, told me that this was a serious misstep in what he had considered a flawless performance by a political neophyte.

This week, Obama lent credence to longtime claims by the Clinton camp that the young challenger would melt under Republican heat. Now he must face weeks of struggle against a revitalized Clinton, and there's no sign when it will end.

A month ago, before the Obama boom really began, his number-crunchers plotted a probable outcome wherein Clinton would win both Ohio and Texas on March 4 and still fall short of a delegate majority at the convention. To avoid carnage in Denver, Democrats have been telling me for weeks that a majority of delegates would somehow align themselves behind whichever candidate has the momentum.

But who has the momentum? Clinton will claim it, particularly if she wins in Pennsylvania, which would give her every major state except Illinois. But Obama will point to his advantage in the number of states and delegates won. A showdown in Denver may be unavoidable.

Such a showdown would reveal the consequences of eight years of Democratic procedural decisions that made no sense save for the premise that Hillary Clinton, as she expected, would be handed the nomination on Super Tuesday. That the convention will be held unusually late raises the prospect of not knowing the identity of the Democratic nominee until shortly before Labor Day. The decision to deprive Michigan and Florida of delegates because their primaries were scheduled too early cannot stand in a contested convention. That Hillary Clinton's candidacy still lives forces Democrats to cope with their mistakes.