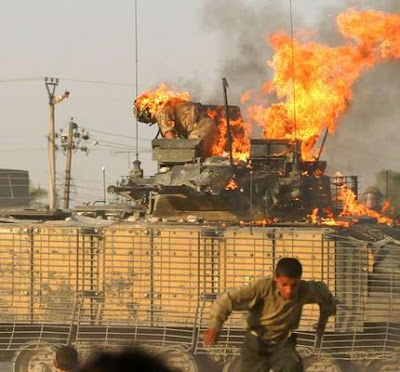 ..."British forces, which ran Basra until December, have reduced their numbers and largely stay in the city airport. Their laissez-faire occupation strategy allowed the province to flourish in illegal smuggling of products, from autos to fuel. Religious fundamentalism grew to a point where women are openly targeted and killed for their choice of clothes. Political parties, gangs and militias intermixed, both in economics and bullets."...
- Pat Dollard
I highly recommend you visit Pat Dollard.
______________________
Questions of timing emerge on Iraq offensive

Backing an operation that has rekindled violence could prove a miscalculation for Bush, some of his allies say.

WASHINGTON -- As U.S. forces are drawn further into renewed fighting, the potential for deepening chaos in Iraq is raising questions about whether the Bush administration made a wise decision or a costly miscalculation in backing an Iraqi government offensive against Shiite militias.

"I would say this is a defining moment in the history of a free Iraq," Bush said at the White House.

But some of the administration's allies have begun to question the timing and wisdom of the offensive, which has met with stiff resistance since it was launched Tuesday in the southern city of Basra. Since then, fighting against Shiite militiamen has spread through much of southern Iraq and into Baghdad. Iraqi forces have called in U.S. airstrikes to fend off well-armed groups in Basra, including an attack by a Navy jet on a mortar position.

Signifying the potential difficulty ahead, other U.S. assets, including special-operations forces and spy planes, are expected to join the fight.

Within the Pentagon, officers expressed concern about the rapid spillover of violence into areas where U.S. forces have spent more than a year painstakingly working to restore order, especially the Shiite neighborhoods of Baghdad.

U.S. officials have long believed that Iraqi militias should be disbanded. But military analysts inside and outside the Pentagon are questioning whether this was the time and place to do it.

The offensive comes two weeks before Army Gen. David H. Petraeus is to testify before Congress on his plans for Iraq.

Petraeus is known for opening his recent presentations by displaying what aides call his favorite slide: a chart showing attacks in Iraq spiking last year, then dramatically dropping amid the deployment of 28,500 additional U.S. troops.

Pentagon officials worry that the recent violence will mar that otherwise compelling narrative.

The extra troops are scheduled to leave by the end of July, and Petraeus is expected to make a recommendation on whether and how fast troops should be sent home after that.

As violence has spread this week, the relative calm that had been returning to Baghdad was disrupted by images that recalled the sectarian war before the troop buildup: repeated shelling of the fortified Green Zone; demonstrations by outraged Shiites; checkpoints in the slums of Sadr City manned by Mahdi Army militiamen loyal to cleric Muqtada Sadr, who say they are being unfairly targeted in the offensive.

The U.S. Embassy was locked down and Baghdad is under a curfew.

In his White House appearance Friday with Kevin Rudd, the new Australian prime minister, Bush seemed unsure about the reasons for the timing of the offensive, saying he had yet to talk to Maliki about it.

"I'm not exactly sure what triggered the prime minister's response," he said.

Bush said the offensive showed the newfound capability of the Iraqi armed forces and the resolve of the country's leaders, especially Maliki. But Maliki, who traveled to Basra to personally oversee the operation, faces a heavy political cost if it bogs down, and he is already confronting demands that he resign.

The 4-day-old offensive was launched by Maliki to confront those outside the law, Bush said, explaining that Basra is an Iraqi port with goods and services that has drawn criminals.

"This is a test and a moment for the Iraqi government," he said.

"And it is an interesting moment for the people of Iraq because . . . they must have confidence in their government's ability to protect them and to be evenhanded."

But retired Army Gen. Jack Keane, an architect of last year's troop buildup, suggested Friday that Maliki acted out of personal animus toward Sadr, rather than in the best interest of Iraq.

"He's a very impulsive person," Keane said of Maliki in an NPR interview. "I think that's what happened here. I think he's way out in front of what the military realities on the ground are."

Gary J. Schmitt, a military analyst at the American Enterprise Institute who was an early supporter of the buildup, said he believed the administration was taken by surprise by Maliki's decision, but that with provincial elections set for October, the central government had to act.

"Tactically, this might not have been the optimal moment, or they may not have prepared as well as they should have. But I think it was quite predictable," Schmitt said. "With the elections coming, it should have been understood as a necessity."

The operation could also affect the U.S. presidential campaign. Continued violence would hinder the ability of Republican Sen. John McCain, an early supporter of the troop increase, to campaign on the success of that strategy. It would also trip up Bush's hopes of leaving office with Iraq appearing to at last be on a glide path to stability.

To prevent drastic deterioration, Keane suggested, U.S. troops may need to be sent south to aid the Iraqis, who took control of Basra's province three months ago from British forces, which have been rapidly withdrawing from the region over the last year.

"In the near term, the Iraqis wanted to do this by themselves, and I can understand our commanders certainly letting them go ahead and give it a try," Keane said. "We may find ourselves also providing some ground forces, although we would do that reluctantly because of the efforts that we have up north to finish Al Qaeda once and for all."

Pentagon spokesman Bryan Whitman said any decision to move U.S. troops to southern Iraq would be "a commander's call."

But as American commanders struggle to deal with the end of the U.S. buildup, other Pentagon officials said, a move to send backup units to southern Iraq is unlikely.

Times staff writers Paul Richter and James Gerstenzang in Washington and Tina Susman in Baghdad contributed to this report.