The Clintons Have Something on Obama. 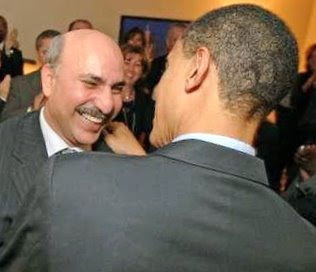 A: Yes and no. Obama says he sought Rezko's advice as a real estate developer and even toured the property with him but got no financial assistance from Rezko. Instead, Obama paid $1.65 million for the house in June 2005 by using money from a book contract and taking out a mortgage.
But Rezko's wife did buy the vacant lot next door, which made it easier for Obama to buy the house. Both pieces of property were owned by the same couple and they insisted on selling them at the same time, but Obama couldn't afford both. Rezko's purchase of the empty lot allowed the home sale to go through, although Obama says Rezko wasn't the only person interested in the lot....

This is speculative. But I'll bet something like it is going on in those smoke-filled rooms the Democrats keep just for these occasions.

Here's the problem if you're Hillary and Bill. You're going to need those unelected superdelegates to get the nomination. You have a lot of clout with them, because they are the Democrat establishment. They owe you, and you might have some background files on them. But if the Democrat masses see you winning, you're in big trouble, because you'll be a white couple beating up on a black couple. You lose. So you have to have an outcome that shows the Obamas jumping on board your parade of their own free will. Whether it's true doesn't matter one little bit. It's that unity photo that matters.

Well, first, the Obamas and their campaign think they can win this on their own, if the elected delegates have their way. Billary might be able to arm-twist enough superdelegates to beat Obama, but can they hide the blood stains if they do? This has to be staged perfectly.

Solution: You have to have a lot of clout to beat the Obamanation. Like a real dirt bomb against Obama if he wins, so he's sure to crash in the general election. Suppose, for example, that you have a lot of inside dope about Rezko and the Chicago machine. Or suppose you can find a Syrian connection to the Obama campaign. (Monica Crowley just claimed that Rezko has traveled to Damascus 26 times in the last three years. Could be perfectly legit business travel. Or just maybe he is linked to some bad guys? The Clintons probably know.)

Then you can send somebody like Harold Ickes to David Axelrod, and tell him that Obama is doomed anyway if he defeats the Hillary machine. So he might as well go for the consolation prize, and run for Prez in 2016.

How would we know if something like this happens? Because after a wild convention the Democrats will come together in love and harmony, with Hillary on top and Obama as heir-apparent-in-eight years. And the Obamas will be smiling and waving to the mosh pit right along with Hill and Billary. It will be a unity ticket, and nobody will ever talk about the backstage deal.

Remember, the alternative is a crack in the liberal coalition that has governed this country since the 1970s. All those superdelegates are trying to figure out how to make a unity ticked happen.

Chances are that some nuclear option is being worked out right now.

It's just a speculation. We can only go by past performance.