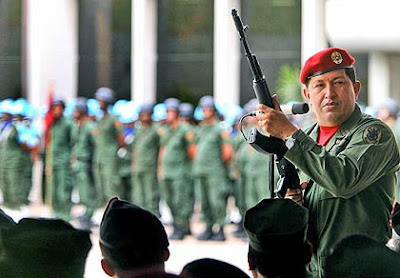 Chavez with an AK-47, of course

Venezuelan President Hugo Chavez moved tanks to the Colombian border and mobilized fighter jets on Sunday, warning Bogota could spark a war after its troops struck inside another of its neighbors, Ecuador.

Reacting to Colombia's killing on Saturday of a Colombian rebel over the border in Ecuador, a Venezuelan ally, Chavez also withdrew all of his diplomats from Bogota in the worst dispute between the neighbors since he came to office in 1999.

"Mr. Defense Minister, move me 10 battalions to the frontier with Colombia immediately, tank battalions. The air force should mobilize," Chavez said, adding he will bolster his military's presence along the 1,400-mile (2,200-km) border.

"May God spare us a war. But we are not going to allow them violate our sovereign territory," the ex-paratrooper added on his weekly TV show.

Colombia's military said on Saturday troops killed Raul Reyes, a leader of Marxist FARC rebels, during an attack on a jungle camp in Ecuador in a severe blow to Latin America's oldest guerrilla insurgency. The operation included air strikes and fighting with rebels across the frontier.

The anti-U.S. Chavez, who had warned a similar operation in Venezuela would be "cause for war," threatened to send Russian-made fighter jets into U.S. ally Colombia if its troops struck inside his OPEC country.

Colombia had no immediate reaction to Venezuela's military movements. Prior to Chavez's statement, Colombian President Alvaro Uribe denied violating Ecuador's sovereignty, saying the operation was in response to fire from across the border.

But the leftist governments of Venezuela and Ecuador questioned the accuracy of his account. Ecuador withdrew its ambassador in protest.

"Colombia has not violated any sovereignty, only acted in accordance with the principal of legitimate defense," the government said in a statement.

Washington, which backs Uribe's fight against the rebels with its largest military aid outside the Middle East, said it was monitoring developments after Chavez's "odd reaction."

France called for restraint on all sides, saying it underlined the need for the negotiated release of FARC hostages, including the most high-profile captive, French-Colombian politician Ingrid Betancourt.

The FARC said in a statement the killing of one its leaders who had been involved in hostage talks should not affect moves to free captives, according to the Venezuelan government.

Uribe, who is popular at home for his tough stance against the rebels, has often jousted with neighbors over spillover from the four-decade conflict. But he has managed differences with pragmatism and disputes have rarely moved past rhetoric.

Chavez has been in a diplomatic dispute with Uribe for months over his mediation to free the rebels' hostages. Uribe says Chavez used the talks to meddle in Colombian affairs.

The Venezuelan called the rebel leader's death the "cowardly assassination" of a "good revolutionary."

"I am putting Venezuela on alert and we will support Ecuador in any situation," he said.

Uribe is "a liar, a Mafia boss, a paramilitary who leads a narco-government and leads a government that is a lackey of the United States," Chavez added.

Michael Shifter of the Inter-American Dialogue thinktank in Washington and a critic of Chavez, said the Venezuelan was playing with fire even if the spat could distract from his domestic problems such as chronic shortages of some foods.

"It maybe is a measure of how concerned he is about his own domestic support," he said. "I don't know how far he is going to go with this, but it is a risky political action."