The Folly of DeBaathification and the Basra Insurrection. 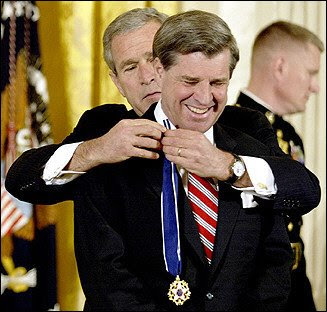 "In the past five years America has suffered 4,000 combat deaths and spent the astronomical sum of $3 trillion trying to get post-Saddam Iraq to a position where an elected Iraqi government is capable of running the country on its own."

There are now 30,000 Iraqi troops trying to undo the lawlessness of Shiite militias in Basra. There are 300 killed. Iran has a hand involved. The results of five years of American nation building hang in the balance of the outcome. George Bush and his hand picked team knew what was best to run Iraq. DeBaathification and the disbanding of the Iraqi armed forces was the doctrinaire strategy imposed by Bush. We may be witnessing the logical outcome of that decision.

Westhawk sees it as a test of America's exit strategy. We shall see:

President Bush has called the current battle between Iraqi security forces and Sadr militiamen in Basra “a defining moment.” In his mind, President Bush probably likens the Basra battle to America’s Whiskey Rebellion, when President Washington had to defend the new constitution against a militia uprising. Of course, many other observers interpret the violence in Basra as Shi’ite factions, some in government uniforms, battling for economic spoils in Basra and the surrounding oil patch.

For the U.S. military in Iraq, the battle for Basra is a defining moment for its exit strategy from the country. Namely, will,

The current battle in Basra is the purest test of this model; to my knowledge there are no U.S. general purpose ground combat units yet engaged in this action. If the Iraqi conventional ground forces, with U.S. indirect support, can prevail against the stubborn Sadr militia in Basra, the U.S. military command will see a quicker way out for U.S. general purpose units in the country.

More importantly, success of this advisor-support model will encourage various factions in Iraq to ally themselves with the U.S. – they won’t want to be on the wrong side of this model when it is used in the future. Demonstrating a technique that works will indicate that there is at least one useful tool in the toolbox. When everyone witnesses that, the incentive for being a troublemaker will drop

This time President George W Bush has got it right. He describes the latest flare-up in the oil-rich southern city of Basra as a "defining moment in the history of a free Iraq", and no one can argue with that.

The US President's record of public declarations on Iraq's future has not always been happy. He will certainly never live down his confident prediction on board the USS Abraham Lincoln in May 2003 that major combat operations had ended. While it was true the military campaign to overthrow Saddam Hussein's regime (which, incidentally, was a stunning success) had achieved its major objective, the actual task of winning the "battle of Iraq", as the President termed it, had only just begun.

In the past five years America has suffered 4,000 combat deaths and spent the astronomical sum of $3 trillion trying to get post-Saddam Iraq to a position where an elected Iraqi government is capable of running the country on its own.

At the time of Saddam's demise, the general assumption within the British and American governments was that it would take about three years to get Iraq back on its feet. The country needed a new constitution and the opportunity to elect a government for the first time in its history. But it also needed military and security resources, and they basically disintegrated after Mr Bush had given his blessing to the disastrous deBaathification programme that removed military and security personnel who had held office under Saddam.

While tangible progress was possible on political reconstruction - the constitution was approved and a government duly elected - providing Iraq with the means to protect itself and enforce the rule of law has been deeply challenging, and the burden of preventing the insurgent and terrorist groups sabotaging the Pax Americana has mainly fallen to the US-led coalition.

Until, that is, last week, when for the first time since Saddam's overthrow, the Iraqi government made what could prove to be the historic decision to assert its authority by laying down a direct challenge to the lawless militia groups that have turned large swathes of Iraq's second city into a no-go zone. In military terms, Basra has been a confrontation waiting to happen since British troops withdrew from the city centre to the air base last September.

Rather than being - as the anti-war brigade claimed - a humiliating retreat, the tactical withdrawal from Saddam's old summer palace on the banks of the Shatt al-Arab was undertaken on the basis that the continuing presence of British troops was exacerbating, rather than helping, the local security situation. The fiercely nationalistic Iraqis did not want outsiders telling them how to run their affairs.

Formal control of the city was returned to the Iraqis in a short ceremony at the air base last December, but much of Basra has remained under the control of a combination of radical Islamic militias and criminal gangs, which has made it virtually impossible for the Iraqi government in Baghdad to exercise its authority over the city.

I attended the Basra hand-over, and after the formalities the local Iraqi military commander, General Mohan al-Furayji, invited me to celebrations in the city centre. When I asked my British military escort whether this was feasible, he replied, "It depends whether you fancy making a one-way trip."

The activities of the Iraqi kidnap gangs in Basra, which almost daily abduct victims at will for either financial gain or political advantage, was one of the many issues General Mohan told me he was keen to confront as soon as he had the manpower available to deal with the militias.

General Mohan, who is now overseeing the Iraqi government's attempts to disarm the militias in Basra, personifies the folly of the American deBaathification programme.

Formerly a senior officer in Saddam's Republican Guard, he was briefly jailed in the 1990s after falling out with the Iraqi dictator. An Iraqi patriot, rather than a Saddam loyalist, he was nevertheless barred from active participation in the initial post-Saddam Iraqi administrations because of his links with the former Baathist regime.

He was brought back into the security apparatus only when Iraq's first democratically elected government took office under Prime Minister Nouri al-Maliki.

Just how much of the bloodshed of the past five years might have been avoided had highly professional and experienced military officers of General Mohan's calibre been allowed to participate from the start of Iraq's reconstruction is an issue historians will debate for generations to come.

But the fact that he and other members of the Iraqi government believe they now have both the confidence and resources to assert their authority represents a critical moment in the country's development, one which could ultimately decide the country's destiny.

The coalition may have succeeded in its goal of establishing a democratic, pro-Western government in Baghdad, but not everyone in Iraq is happy with this arrangement, particularly radical Shia leaders such as Muqtada al-Sadr, whose Mehdi Army is in the vanguard of the resistance to the Iraqi government's forces in Basra.

Al-Sadr and his supporters, who receive military and financial support from Iran, are fiercely opposed to the current political status quo, and want to see the creation of an Iranian-style Shia state in Iraq, which would not at all be in the West's interests.

The big difference between the Iraqi government and the Mehdi Army is that the former has been elected, while the other seeks to impose its hardline anti-Western ideology on the Iraqi people who, in Basra at least, have no say in the matter.

Most of the Iraqi forces now attempting to ensure that the rule of law, rather that the law of the gun, prevails in Basra have been trained by the British military, which is providing air and artillery support for the Iraqi government cause.

For the battle for Basra is a test of both the Iraqi government's legitimacy and virility. If General Mohan and his colleagues can prevail over the militias who pose the greatest threat to Iraq's survival as a democratic entity, the Iraqi people can look forward to taking charge of their own destiny - and the coalition's troops can start planning their withdrawal in the knowledge that their mission has been successfully accomplished.