Drugs in Our Water: Is the US Population Too High? 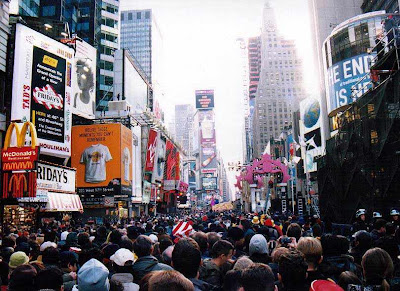 Too many wolves. Too many deer. In South Africa there are too many elephants. People recognize the problems and distortions that occur when an animal population expands beyond the ability of an area to accommodate them, but what of people themselves?

The US had a population of one hundred and fifty million two generations ago. Today the number has doubled to three hundred million. Much of that growth has come from immigration. Surely there is an optimum population, a desirable population or converesely a number that is too high.

Whatever the number the results of too many people becomes apparent after the fact. Today we have an example:

The Washington area's drinking water contains trace amounts of six commonly used drugs that typically turn up in wastewater and cannot be filtered out by most treatment systems.

The pharmaceuticals -- an anti-seizure medication, two anti-inflammatory drugs, two kinds of antibiotics and a common disinfectant -- were found in very small concentrations in the water supply that serves more than 1 million people in the District, Arlington County, Falls Church and parts of Fairfax County. But scientists say the health effects of long-term exposure to such drugs are not known.

Pharmaceuticals, along with trace amounts of caffeine, were found in the drinking water supplies of 24 of 28 U.S. metropolitan areas tested. The findings were revealed as part of the first federal research on pharmaceuticals in water supplies, and those results are detailed in an investigative report by the Associated Press set to be published today.

In addition to caffeine, the drugs found in water treated by the Washington Aqueduct include the well-known pain medications ibuprofen and naproxen, commonly found in Aleve. But there were also some lesser-known drugs: carbamazepine, an anti-convulsive to reduce epileptic seizures and a mood stabilizer for treating bipolar disorders; sulfamethoxazole, an antibiotic that can be used for humans and animals in treating urinary tract and other infections; and monensin, an antibiotic typically given to cattle. In addition, the study uncovered traces of triclocarban, a disinfectant used in antibacterial soaps.

That the drugs were found so commonly nationwide highlights an emerging water dilemma that the public rarely considers. The drugs we use for ourselves and animals are being flushed directly into wastewater, which then becomes a drinking water source downstream. However, most wastewater and drinking water treatment systems, including Washington's, are incapable of removing those drugs.

And although the chemicals pose no immediate health threat in the water, the health effects of drinking these drug compounds over a long period is largely unstudied. Some scientists said there is probably little human health risk; others fear chronic exposure could alter immune responses or interfere with adolescents' developing hormone systems.

Washington's water regulators and utility officials say they are not alarmed by the findings because the drugs are found at such low levels -- parts per trillion, a tiny fraction of the amount in a medical dose. But they do view these "emerging contaminants" with concern.

"What concerns me is we're finding pharmaceuticals in the river that we rely upon for drinking water," said Thomas P. Jacobus, general manager of the Washington Aqueduct. "If we can't get them out, we have to find a way to neutralize them if we find there's a health effect from them."

Jacobus said the aqueduct leadership will recommend in the next few months likely upgrades for water treatment to deal with an array of newly identified and increasing contaminants in the water. The aqueduct uses chlorine, which kills a wide group of bacteria and breaks down some chemicals but cannot disrupt pharmaceuticals. Studies show ozone water treatment is the most effective in zapping such drugs.

The drugs discovered in testing over the past two years typically get into the water supply because they pass through a user's body and are flushed downstream. The U.S. Environmental Protection Agency is studying some pharmaceuticals for their impact on public health but has not set safety standards for any of the drugs.

"We recognize it is a growing concern, and we're taking it very seriously," Benjamin H. Grumbles, the EPA's assistant administrator for water, said of the drugs' presence.

There is no clear evidence of a human health threat from such low levels of pharmaceuticals. But scientists warn that, because there has been very little study of the long-term or synergistic effects of this kind of drug exposure, water providers and regulators need to exercise caution. Although experts agree that aquatic life are most at risk from exposure to the drugs in rivers and streams, researchers are concerned about what they don't know about human health effects.

In other findings from its reporting, the AP said officials in Montgomery County and Fairfax have found numerous pharmaceuticals in their environmental watersheds but do not test their drinking water supplies for the same chemical compounds.

Nationwide, the AP reported that researchers found anti-depressants, antacids, synthetic hormones from birth control pills, and many other human and animal medicines in the water. In San Francisco, tests found a sex hormone. In New York, the water tested positive for heart medicines and a prescription tranquilizer.

The Associated Press contributed to this report.