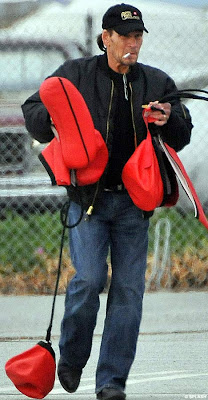 Gaunt: Patrick Swayze puffing on his cigarette yesterday.
Cancer treatment is the human struggle for life while your body has other ideas. It is the corruption of life by a body gone insane. We are programmed to live and resist dying. Fight or flight is not a dilemma, it is in our DNA, and every fortunate cancer patient faces a choice to bargain for more life in exchange for what is hopefully short term pain and severe punishment. The unfortunate succumb.

If unfortunate enough to be faced with the choice, go for the pain and suffering. It is worth the price. You will win or you will lose. In life we all ultimately lose, but if you fight, and pray, and believe, you just may make it, and that is the sweetest victory of all.

Cancer humbles and teaches as does life itself.

Patrick Swayze still smoking despite being diagnosed with pancreatic cancer

Puffing on a cigarette is not the most sensible thing to do when you're battling cancer.

But if, as reports suggest, Patrick Swayze has only a few weeks to live, he may think it makes little difference.

The once-athletic star of Dirty Dancing, Ghost, and action films such as Point Break looked gaunt as he dragged on a cigarette while waiting for his private plane.

He had just completed a session of chemotherapy for pancreatic cancer at Stanford University Medical Centre in California.

His thinning hair was hidden beneath a baseball cap.

The 55-year-old star is in pain, but is still fighting and is determined to beat the pancreatic cancer that has ravaged his body, says his 81-year-old mother.

Heartbroken Patsy Swayze, a former Hollywood dance choreographer who encouraged her son to enter showbusiness, said: "Patrick doesn't deserve to get this. He's got such a big heart.

"He's been such a good and generous and thoughtful person. It breaks my heart to know he's suffering. But he bears it and is determined to beat this."
She told America's National Enquirer magazine: "He's hanging in there and getting the best treatment he can."

Swayze has been a 60-a-day smoker for years, and research shows that smokers are twice as likely to get pancreatic cancer as non-smokers.

Rhita McNair, a close friend of Swayze and his wife of 32 years, Lisa Niemi, said that like the long-running Marlborough Man cowboy cigarette ads, Swayze kept smoking even as he enjoyed the fresh air during horseback rides on his 17,000-acre ranch near Las Vegas.

Miss McNair said that during a recent cattle drive, Swayze looked as though he'd lost about two stones in weight, but "sadly he was still smoking."( more)