The Recession in Central America and the Carbibbean 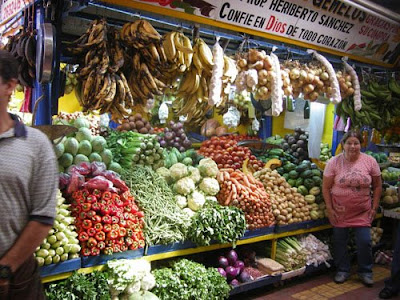 Encourage this.
Throughout Latin America, many small manufacturers and farmers have been decimated by cheap goods from China. For instance, it is now next to impossible to find garlic grown in Costa Rica. It all comes from China, which flooded Latin America with it when US consumers started looking at labels and rejected food grown or produced in China.

Countries such as Costa Rica, foolishly bet the farm on foreign tourism and that has slowed significantly.

Most Latin American countries have no social safety net. There is no unemployment compensation, food stamps or local relief when you are unemployed. This is a potential serious problem for the US in many ways: illegal immigration, increased crime, drug trafficking, and social unrest from the radical left.

It is also an opportunity for the US to develop a program that can help small manufacturers and farmers survive in their own countries and would assist the US in reducing its dependence on Chinese trade and offset the distortions in currency flows.

Free and fair trade with Latin America is vital to US interests.

Tico Tomatoes and Peppers to US Market
By Vanessa I. Garnica
Tico Times Staff | vgarnica@ticotimes.net

Beginning next May, 15 local producers will be able to export tomatoes and peppers to the United States. These growners have met the conditions of a rigorous protocol which took producers and government agencies, from both the United States and Costa Rica, about three years to finalize.

Last Friday morning, representatives from both Countries signed a public health agreement that will allow local producers to export their products to the North American giant.

The protocol states specifically that producers must “take the necessary actions” to keep greenhouses free of at least ten different pests and viruses of quarantine importance to the United States.

“The process is very long because before farmers could even think about exporting, the United States' APHIS (Animal and Plant Health Inspection Service) and the Costa Rican Ministry of Agriculture (MAG) together had to determine areas that are either free from fruit flies or have a very low prevalence of (them),” said Eric Hoffman, agricultural specialist for the U.S. Department of Agriculture (USDA).

“You don't want to build the (greenhouse) facilities until you have proven that you can export from that area… then the producers can begin to construct, plant and the whole process that that takes.”

According to the Protocol, measures producers must take in order to prevent such pests from entering their crops “include but are not limited to: good agricultural practices for the pest control in the nurseries and culling of infested vegetables.”

“Being able to export tomatoes to the United States is the beginning of a dream for any farmer,” Blanco said. “To produce for a premium market, where we will get paid in dollars and where we won't pose competition for the local producers, is a definite dream come true.”

His association currently has 50 member producers, although only 15 will be able to begin exporting next May. Some of the participating greenhouses are located in Alajuela, Cartago, Turrialba, and the Nandayure areas.

“We expect our project to grow by 50 percent during this year,” Blanco said.

“This is proof positive that CAFTA is going to open new opportunities for both the United States and Costa Rica,” said Peter Cianchette, U.S. Ambassador to Costa Rica, who signed the health agreement on behalf of the U.S. government.

Marco González Vargas, another agricultural specialist for the USDA, said he was satisfied with his findings during his numerous visits to the participating greenhouses.

“All of these producers were really, really clean and really organized. They know what they are doing,” González said. “They really want to get into the market.”

“We do an informal inspection when they are ready to export. APHIS will carry out surprise spot checks on the greenhouses at least twice during the season.”

Another advantage to growing tomatoes and peppers in greenhouses is that fewer pesticides are needed to prevent viruses and infestation by fruit flies, González explained.

Hoffman insisted that it is not only important for these producers to meet the protocol at the initial stage, but always.

“When Marco goes out and inspects he makes sure that all netting that prevents the entrance of insects has no holes and that (the greenhouse) is completely closed off,” Hoffman added.

The same goes for boxes and trucks, Hoffman said. Both must be kept in an area out of the reach of insects..

“We have to be able to trace back where each of the boxes came from, so if we do happen to find an insect of quarantine significance in the United States, then we can know exactly where it was produced,” Hoffman said.

Minister of agriculture Javier Flores said that this agreement, which took more than three years to settle, will open doors to local farmers and will allow the possibility of exporting other crops in the future.

“This is a very important step where we will be able to access a market that was previously closed off for us,” Flores said on Friday. “This market represents a $3 million a year market for these 15 producers.”

In the past, Flores said, producers were only able to grow their tomatoes and peppers six months out of the year. However, the greenhouse will allow these farmers to grow and export their products all year long.

“Right now, the fact that some of the agricultural production in the United States is stalled allows us the possibility to grow these crops,” Flores said.