"Petraeus made the mistake of thinking he was still dealing with George Bush instead of with Barack Obama." 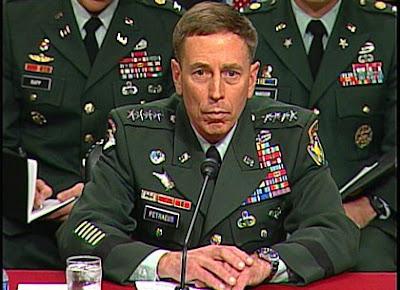 WASHINGTON: CENTCOM commander General David Petraeus, supported by Defense Secretary Robert Gates, tried to convince President Barack Obama that he had to back down from his campaign pledge to pullout all US combat troops from Iraq within 18 months at an Oval Office meeting on January 21, sources have said.

But Obama informed Gates, Petraeus and Joint Chiefs Chairman Admiral Mike Mullen that he wasn't convinced and wanted Gates and the military leaders to come back quickly with a detailed 16-month plan, according to two sources who have talked with participants in the meeting.

Obama's decision to override Petraeus' recommendation has not ended the conflict between the president and senior military officers over troop withdrawal, however. There are indications that Petraeus and his allies in the military and the Pentagon, including General Ray Odierno, now the top commander in Iraq, have already begun to try to pressure Obama to change his withdrawal policy.

A network of senior military officers is also reported to be preparing to support Petraeus and Odierno by mobilizing public opinion against Obama's decision.

Petraeus was visibly unhappy when he left the Oval Office, according to one of the sources. A White House staffer present at the meeting was quoted by the source as saying: "Petraeus made the mistake of thinking he was still dealing with George Bush instead of with Barack Obama."

Petraeus, Gates and Odierno had hoped to sell Obama on a plan that they formulated in the final months of the Bush administration that aimed at getting around a key provision of the US-Iraqi withdrawal agreement by re-categorizing large numbers of combat troops as support troops. That subterfuge was formulated by the United States last November while ostensibly allowing Obama to deliver on his campaign promise.

Gates and Mullen had discussed the relabeling scheme with Obama as part of the Petraeus-Odierno plan for withdrawal they had presented to him in mid-December, according to a December 18 New York Times story.

Obama decided against making any public reference to his order to the military to draft a detailed 16-month combat-troop withdrawal policy, apparently so that he can announce his decision only after consulting with his field commanders and the Pentagon.

The first clear indication of the intention of Petraeus, Odierno and their allies to try to get Obama to amend his decision came on January 29 when the New York Times published an interview with Odierno, ostensibly based on the premise that Obama had indicated that he was "open to alternatives."

The Times reported that Odierno had "developed a plan that would move slower than Mr. Obama's campaign timetable" and had suggested in an interview "it might take the rest of the year to determine exactly when United States forces could be drawn down significantly."

The opening argument by the Petraeus-Odierno faction against Obama's withdrawal policy was revealed the evening of the January 21 meeting when retired army General Jack Keane, one of the authors of the Bush troop-surge policy and a close political ally and mentor of Petraeus, appeared on the "Lehrer News Hour" to comment on Obama's pledge on Iraq combat troop withdrawal.

Keane, who had certainly been briefed by Petraeus on the outcome of the Oval Office meeting, argued that implementing such a withdrawal of combat troops would "increase the risk rather dramatically over the 16 months."

He asserted that it would jeopardize the "stable political situation in Iraq" and called that risk "not acceptable."

The assertion that Obama's withdrawal policy threatens the gains allegedly won by the Bush troop surge and Petraeus' strategy in Iraq will apparently be the theme of the campaign that military opponents are now planning.


Keane, the army vice chief of staff from 1999-03, has ties to a network of active and retired four-star army generals, and since Obama's January 21 order on the 16-month withdrawal plan, some of the retired four-star generals in that network have begun discussing a campaign to blame Obama's troop withdrawal from Iraq for the ultimate collapse of the political "stability" that they expect to follow the US withdrawal, according to a military source familiar with the network's plans.

The source says the network, which includes senior active-duty officers in the Pentagon, will begin making the argument to journalists covering the Pentagon that Obama's withdrawal policy risks an eventual collapse in Iraq. That would raise the political cost to Obama of sticking to his withdrawal policy.

If Obama does not change the policy, according to the source, they hope to have planted the seeds of a future political narrative blaming his withdrawal policy for the "collapse" they expect in an Iraq without US troops.

That line seems likely to appeal to reporters covering the Iraq troop-withdrawal issue. Ever since Obama's inauguration, media coverage of the issue has treated Obama's 16-month withdrawal proposal as a concession to anti-war sentiment which will have to be adjusted to the "realities" as defined by the advice to Obama from Gates, Petraeus and Odierno.

Ever since he began working on the troop surge, Keane has been the central figure manipulating policy in order to keep as many US troops in Iraq as possible. It was Keane who got Vice President Dick Cheney to push for Petraeus as top commander in Iraq in late 2006 when the existing commander, General George W. Casey, did not support the troop surge.

It was Keane who protected Petraeus' interests in ensuring the maximum number of troops in Iraq against the efforts by other military leaders to accelerate troop withdrawal in 2007 and 2008. As Bob Woodward reported in "The War Within," Keane persuaded Bush to override the concerns of the Joint Chiefs of Staff about the stress of prolonged US occupation of Iraq on the US Army and Marine Corps as well as its impact on the worsening situation in Afghanistan.

Bush agreed in September 2007 to guarantee that Petraeus would have as many troops as he needed for as long as wanted, according to Woodward's account.

Keane had also prevailed on Gates in April 2008 to make Petraeus the new commander of CENTCOM. Keane argued that keeping Petraeus in the field was the best insurance against a Democratic administration reversing the Bush policy toward Iraq.

Keane had operated on the assumption that a Democratic president would probably not take the political risk of rejecting Petraeus' recommendation on the pace of troop withdrawal from Iraq. Woodward quotes Keane as telling Gates: "Let's assume we have a Democratic administration and they want to pull this thing out quickly, and now they have to deal with General Petraeus and General Odierno. There will be a price to be paid to override them."

Obama told Petraeus in Baghdad last July that if elected, he would regard the overall health of the US Army and Marine Corps and the situation in Afghanistan as more important than Petraeus' obvious interest in maximizing US troop strength in Iraq, according to Time magazine's Joe Klein.

But judging from Petraeus' shock at Obama's January 21 decision, he had not taken Obama's previous rejection of his arguments seriously. That miscalculation suggests that Petraeus had begun to accept Keane's assertion that a newly elected Democratic president would not dare to override his policy recommendation on troops in Iraq.