Dithering With the Housing Mess 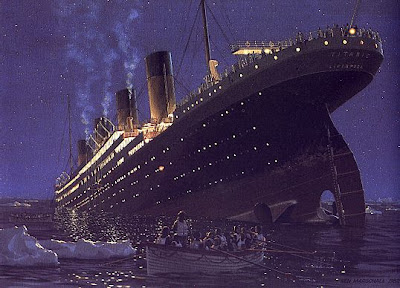 The previous administration failed to recognize the obvious ramifications of rampant foreclosures and falling house prices. All they had to do was take a drive through any American suburb and notice the absurdity of everyone trying to live in a mansion. It was obvious that a disproportionate amount of investment went into housing.

Economists knew that Americans were not saving money but instead were using the allusion of ever rising house prices as a method of savings. Government was even worse. Money, denominated in ever greater rows of zero's was borrowed from the Chinese to finance the absurdity of waging a democracy crusade to the Islamic world.

The foolishness and self delusion started to come undone over a year and a half ago. The small trash fire has become a conflagration that is scorching the world financial system. Bush and company deferred to the bankers and their zealously held conviction that they were seeing a market correction. They were wrong.

It is way past time to tell the bankers to shut up and fix the housing mess whatever it takes. The Republican solution of lowering everyone's mortgage to 4% is a logical place to start. Give bankruptcy judges the personal real estate cramdown option and shove it down the banker's throats where it belongs. The mere threat of it will give them some old time religion.

Global bond markets are calling the bluff of the US Federal Reserve.

The yield on 10-year US Treasury bonds – the world's benchmark cost of capital – has jumped from 2pc to 3pc since Christmas despite efforts to talk the rate down.

This level will asphyxiate the US economy if allowed to persist, as Fed chair Ben Bernanke must know.

The US is already in deflation. Core prices – stripping out energy – fell at an annual rate of 2pc in the fourth quarter. Wages are following. IBM, Chrysler, General Motors, and YRC, have all begun to cut pay.

The "real" cost of capital is rising as the slump deepens. This is textbook debt deflation. It was not supposed to happen. The Bernanke doctrine assumes that the Fed can bring down the whole structure of interest costs, first by slashing the Fed Funds rate to zero, and then by making a "credible threat" to buy Treasuries outright with printed money.

Mr Bernanke has been repeating this threat since early December. But talk is cheap. As the Fed hesitates, real yields climb ever higher. Plainly, the markets do not regard Fed rhetoric as "credible" at all.

Who can blame bond vigilantes for going on strike? Nobody wants to be left holding the bag if and when the global monetary blitz succeeds in stoking inflation. Governments are borrowing frantically to fund their bail-outs and cover a collapse in tax revenue. The US Treasury alone needs to raise $2 trillion in 2009.

Where is the money to come from? China, the Pacific tigers and the commodity powers are no longer amassing foreign reserves ($7.6 trillion). Their exports have collapsed. Instead of buying a trillion dollars of extra bonds each year, they have become net sellers. In aggregate, they dumped $190bn over the last fifteen weeks.

The Fed has stepped into the breach, up to a point. It has bought $350bn of commercial paper, and begun to buy $600bn of mortgage bonds. That helps. But still it recoils from buying Treasuries, perhaps fearing that any move to "monetise" Washington's deficit starts a slippery slope towards an Argentine fate. Or perhaps Bernanke doesn't believe his own assurances that the Fed can extract itself easily from emergency policies when the cycle turns.

As they dither, the world is falling apart. Events in Japan have turned deeply alarming. Exports fell 35pc in December. Industrial output fell 9.6pc. The economy is contracting at an annual rate of 12pc. "Falling exports are triggering a downward spiral of production, incomes and spending. It is important to prepare for swift policy steps, including those usually regarded as unusual," said the Bank of Japan's Atsushi Mizuno.

The bank is already targeting equities on the Tokyo bourse. That is not enough for restive politicians. One bloc led by Senator Koutaro Tamura wants to create $330bn in scrip currency for an industrial blitz. "We are facing hyper-deflation, so we need a policy to create hyper-inflation," he said.

This has echoes of 1932, when the US Congress took charge of monetary policy. We are moving to a stage of this crisis where democracies start to speak – especially in Europe.

The European Central Bank's refusal to follow the lead of the US, Japan, Britain, Canada, Switzerland and Sweden in slashing rates shows how destructive Europe's monetary union has become. German orders fells 25pc year-on-year in December. French house prices collapsed 9.9pc in the fourth quarter, the steepest since data began in 1936. "We're dealing with truly appalling data, the likes of which have never been seen before in post-War Europe," said Julian Callow, Europe economist at Barclays Capital.

Spain's unemployment has jumped to 3.3m – or 14.4pc – and will hit 19pc next year, on Brussels data. The labour minister said yesterday that Spain's economy could not "tolerate" immigrants any longer after suffering "hurricane devastation". You can see where this is going.

Ireland lost 36,500 jobs in January – equal to a monthly loss of 2.3m in the US. As the budget deficit surges to 12pc of GDP, Dublin is cutting wages, disguised as a pension levy. It has announced "Rooseveltian measures" to rescue the foundering companies.

The ECB's obduracy has nothing to do with economics. It fears zero rates as a vampire fears daylight, because that brings the purchase of eurozone bonds ever closer into play. Any such action would usher in an EMU "debt union" by the back door, leaving Germany's taxpayers on the hook for Club Med liabilties. This is Europe's taboo.

Meanwhile, Eastern Europe is imploding. Industrial output fell 27pc in Ukraine and 10pc in Russia in December. Latvia's GDP contracted at a 29pc annual rate in the fourth quarter. Polish homeowners have had the shock from Hell. Some 60pc of mortgages are in Swiss francs. The zloty has halved against the franc since July.

Readers have berated me for a piece last week – "Glimmers of Hope" – that hinted at recovery. Let me stress, I was wearing my reporter's hat, not expressing an opinion. My own view, sadly, is that there is no hope at all of stabilizing the world economy on current policies.