Buy a gun, get a permit and buy a murse (man purse) 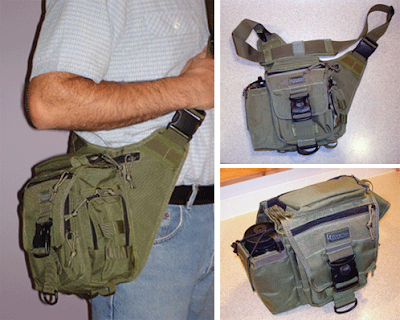 Sun-tzu - The Art of War

An editorial in this morning's times discusses and warns about the recent (since 911 actually) intensifying trend of terrorists striking civilian targets in teams. The author predicts that it will happen in the US..."Nightmare possibilities include synchronized assaults on several shopping malls, high-rise office buildings or other places that have lots of people and relatively few exits. Another option would be to set loose half a dozen two-man sniper teams in some metropolitan area..."

The author, not surprisingly, sees only governmental solutions and preventions. Mr. Arquilla fails to contemplate the lethal and sensible use of an armed citizenry.

WITH three Afghan government ministries in Kabul hit by simultaneous suicide attacks this week, by a total of just eight terrorists, it seems that a new “Mumbai model” of swarming, smaller-scale terrorist violence is emerging.

The basic concept is that hitting several targets at once, even with just a few fighters at each site, can cause fits for elite counterterrorist forces that are often manpower-heavy, far away and organized to deal with only one crisis at a time. This approach certainly worked in Mumbai, India, last November, where five two-man teams of Lashkar-e-Taiba operatives held the city hostage for two days, killing 179 people. The Indian security forces, many of which had to be flown in from New Delhi, simply had little ability to strike back at more than one site at a time.

While it’s true that the assaults in Kabul seem to be echoes of Mumbai, the fact is that Al Qaeda and its affiliates have been using these sorts of swarm tactics for several years. Jemaah Islamiyah — the group responsible for the Bali nightclub attack that killed 202 people in 2002 — mounted simultaneous attacks on 16 Christian churches in Indonesia on Christmas Eve in 2000, befuddling security forces.

Even 9/11 itself had swarm-like characteristics, as four small teams of Qaeda operatives simultaneously seized commercial aircraft and turned them into missiles, flummoxing all our defensive responses. In the years since, Al Qaeda has coordinated swarm attacks in Saudi Arabia, Tunisia, Turkey, Yemen and elsewhere. And at the height of the insurgency in Iraq, terrorists repeatedly used swarms on targets as small as truck convoys and as large as whole cities.

This pattern suggests that Americans should brace for a coming swarm. Right now, most of our cities would be as hard-pressed as Mumbai was to deal with several simultaneous attacks. Our elite federal and military counterterrorist units would most likely find their responses slowed, to varying degrees, by distance and the need to clarify jurisdiction.

While the specifics of the federal counterterrorism strategy are classified, what is in the public record indicates that the plan contemplates having to deal with as many as three sites being simultaneously hit and using “overwhelming force” against the terrorists, which probably means mustering as many as 3,000 ground troops to the site. If that’s an accurate picture, it doesn’t bode well. We would most likely have far too few such elite units for dealing with a large number of small terrorist teams carrying out simultaneous attacks across a region or even a single city.

Nightmare possibilities include synchronized assaults on several shopping malls, high-rise office buildings or other places that have lots of people and relatively few exits. Another option would be to set loose half a dozen two-man sniper teams in some metropolitan area — you only have to recall the havoc caused by the Washington sniper in 2002 to imagine how huge a panic a slightly larger version of that form of terrorism would cause.

So how are swarms to be countered? The simplest way is to create many more units able to respond to simultaneous, small-scale attacks and spread them around the country. This means jettisoning the idea of overwhelming force in favor of small units that are not “elite” but rather “good enough” to tangle with terrorist teams. In dealing with swarms, economizing on force is essential.

We’ve actually had a good test case in Iraq over the past two years. Instead of responding to insurgent attacks by sending out large numbers of troops from distant operating bases, the military strategy is now based on hundreds of smaller outposts in which 40 or 50 American troops are permanently stationed and prepared to act swiftly against attackers. Indeed, their very presence in Iraqi communities is a big deterrent. It’s small surprise that overall violence across Iraq has dropped by about 80 percent in that period.

For the defense of American cities against terrorist swarms, the key would be to use local police officers as the first line of defense instead of relying on the military. The first step would be to create lots of small counterterrorism posts throughout urban areas instead of keeping police officers in large, centralized precinct houses. This is consistent with existing notions of community-based policing, and could even include an element of outreach to residents similar to that undertaken in the Sunni areas of Iraq — even if it were to mean taking the paradoxical turn of negotiating with gangs about security.

At the federal level, we should stop thinking in terms of moving thousands of troops across the country and instead distribute small response units far more widely. Cities, states and Washington should work out clear rules in advance for using military forces in a counterterrorist role, to avoid any bickering or delay during a crisis. Reserve and National Guard units should train and field many more units able to take on small teams of terrorist gunmen and bombers. Think of them as latter-day Minutemen.

Saudi Arabia, Tunisia, Turkey and Yemen all responded to Qaeda attacks with similar “packetizing” initiatives involving the police and armed forces; and while that hasn’t eliminated swarm attacks, the terrorists have been far less effective and many lives have been saved.

As for Afghanistan, where the swarm has just arrived, there is still time to realize the merits of forming lots of small units and sprinkling them about in a countrywide network of outposts. As President Obama looks to send more troops to that war, let’s make sure the Pentagon does it the right way.

Yes, the swarm will be heading our way, too. We need to get smaller, closer and quicker. The sooner the better.

John Arquilla teaches in the special operations program at the Naval Postgraduate School and is the author of “Worst Enemy: The Reluctant Transformation of the American Military.