"The SUSPECT is in custody"- Ahem, Barack, Bro, he set his balls on fire and flames hit the ceiling of the plane.


Obama comes out fighting. We will bring a lawyer to a gun fight.

"This was a serious reminder of the dangers that we face and the nature of those who threaten our homeland," says Barack.

"We do not yet have all the answers about this latest attempt, but those who would slaughter innocent men, women and children must know that the United States will do more than simply strengthen our defenses."

Barack, check this, the black Muslim admitted to the passengers that he was part of AQ. AQ has already taken their bows.

In its communique, an Al Qaeda affiliate said Abdulmutallab had coordinated the plot with members of its group, using explosives they manufactured. The website posting was titled "The Brother Mujahid Omar Farooq al-Nigeri's Operation," and it included a photograph of a smiling Abdulmutallab in front of an Al Qaeda banner.

Abdulmutallab has told authorities that the terrorist organization trained him and provided the explosives. 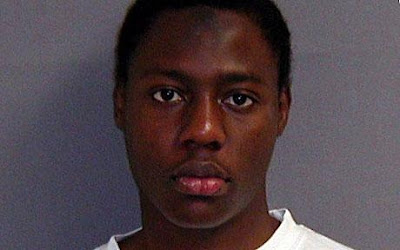 Abdulmutallab not smiling
"We will continue to use every element of our national power to disrupt, to dismantle and defeat the violent extremists who threaten us -- whether they are from Afghanistan or Pakistan, Yemen or Somalia, or anywhere where they are plotting attacks."

Barack, I suppose that means the black Muslim is being interrogated as we speak..Oh, you mentioned he is a suspect, uh does that mean he has a lawyer? His lawyer is allowing an interrogation?

"We will not rest," Obama said, "until we find all who were involved and hold them accountable."

Who is we? After that Barack went back to shooting hoops and playing golf.

The Yemeni foreign ministry confirmed Monday that Abdulmutallab visited several times -- ostensibly to study Arabic at a school in Sana, the capital -- including one trip from early August until early December of this year.

"Authorities are currently investigating who he was in contact with," the ministry said. But one Yemeni official said it might be hard to trace Abdulmutallab's steps, given how many students come from all over the world to study Arabic and Islam in the country.

After, (one would hope, but not necessarily) a major ass-chewing from the White House, Napolitano took to the airwaves to try to minimize criticism over remarks Sunday in which she said the security system had worked!

Without going into details Janet sort of mentioned a little failure to keep Abdulmutallab off the plane.

When asked Monday on NBC's "Today" show whether the system had "failed miserably," Napolitano answered: "It did."

"No one is happy. . . . An extensive review is underway," Napolitano said.

In Amsterdam on Monday, authorities said they were investigating whether an accomplice had helped Abdulmutallab board Flight 253 without a passport -- possibly by claiming he was a Sudanese refugee.

We are taking in African Muslim refugees who do not have passports?

We are sending thirty thousand more good American soldiers to fight in Afghanistan to keep AQ out of Omaha and at the same time we are taking in African Muslims into the US who have no identity cards.

In Detroit, it is reported that a scheduled hearing in Abdulmutallab's case was canceled without explanation and that prosecutors continued their efforts to get a DNA sample from him to match against evidence taken from the plane.

Efforts to get his DNA? His balls were on fire. Here is a hint to get some DNA. Check his undies or snatch some of his hair from his head.

Prosecutors? They bring a gun to a gun fight and Obama brings a lawyer. Damn, I feel better.

Detroit terror attack: 'There are many more like me,' bomber warns

Security agencies in Britain and the US are under increasing pressure to explain how the Detroit bomber was able to board an aircraft carrying explosives despite being on intelligence “watch lists” in both countries.

Umar Farouk Abdulmutallab, 23, had been banned from entering the UK after he applied for a student visa in May to study at a bogus college, Alan Johnson, the Home Secretary, has confirmed.
Then, six weeks ago, his family in Nigeria contacted US security officials to express “concerns” that he had become radicalised after he “disappeared” to the al-Qaeda stronghold of Yemen, resulting in him being put on a US anti-terror database.

But because the two countries failed to share their intelligence, neither was aware of the full picture about Abdulmutallab, who hid a potentially devastating explosive device under his clothes and tried to detonate it as an Airbus with 289 people on board approached Detroit on Christmas Day.
Abdulmutallab has given a defiant warning to US investigators, telling them: “There are more just like me who will strike soon.”
Dozens of Islamic militants from Britain are thought to have travelled to Yemen in recent months, where the security services fear they are being trained by al-Qaeda bomb-makers to launch further attacks against Western targets.
Last night a group calling itself al-Qaeda in the Arabian Peninsular (AQAP) claimed responsibility for the attempted suicide bombing on Northwest Airlines flight 253.
In a separate statement, AQAP had earlier vowed revenge for military operations carried out by the Yemeni government earlier this month, which were backed by the US, in which the group claims 50 people died. It said: “We will not let Muslim women and children’s blood be spilled without taking revenge.”
Abdulmutallab, the privately-educated son of one of Nigeria’s most prominent bankers, managed to smuggle his bomb aboard the aircraft by strapping a condom filled with the high explosive PETN to the inside of his leg and then attempting to detonate it using a syringe filled with a liquid chemical. The PETN powder caught fire but did not explode, sparing the lives of all those on board.
Investigators are worried that AQAP has developed what is effectively an “undetectable bomb” involving PETN that can only be found by using expensive and intrusive full body scanners at airports, with huge implications for airport security.
As US agents continued to question him at a prison in Michigan, his father, Alhaji Umaru Abdulmutallab, said he had told Nigerian security officials two months ago of his concerns about his son’s behaviour, then made direct contact with US agents two weeks after that.
Janet Napolitano, the US Homeland Security Chief, admitted that America’s counter-terrorist system had failed, as Abdulmutallab, who had been placed on an intelligence database, should not have been allowed to board the flight from Amsterdam to Detroit, having flown to the Netherlands from Lagos.
She said: “Our system did not work in this instance. No one is happy or satisfied with that. An extensive review is under way.”
Meanwhile Alan Johnson suggested Britain’s information about Abdulmutallab - which included his fingerprints - would have been shared with America, only for the Home Office to admit later that the intelligence was not passed on to any foreign law enforcement agencies.
Patrick Mercer, chairman of the Commons counterterrorism subcommittee, said: “The relationship between British and US intelligence agencies is absolutely vital and it doesn’t seem to have done its job on this occasion.
“The relationship has been strained recently, particularly after the early release of the Lockerbie bomber, which caused a huge amount of tension, and this latest episode points to the fact that the relationship is not as well developed as it has been in the past.”
Sources have also told The Daily Telegraph that the intelligence-sharing relationship with the US has come under additional strain as a result of legal action taken by lawyers acting for the former Guantanamo detainee, Binyam Mohamed.
They say that US counter-terrorism officials are having to consider the legal ramifications of sharing information with the British that could then be released by the British courts.
Abdulmutallab’s family said in a statement that they sought assistance from the Americans a month and a half ago, asking them to find their son and return him home.
They added: “We provided them with all the information required of us to enable them do this.”
The student has allegedly told the FBI that he was put in contact with al-Qaeda after getting in touch with a radical Yemeni preacher through the internet.
Sources also said that during his time at University College London he attended the East London Mosque in Whitechapel, where the radical preacher Anwar al-Awlaki, now hiding in Yemen, was invited to speak by satellite link earlier this year.
The government’s COBRA emergency committee met yesterday morning to discuss the case but ministers did not attend.
Questions have also been asked about why further checks were not carried out after he bought his ticket in Ghana, West Africa with nearly $3,000 in cash and did not check in any hold luggage when he boarded in Lagos.
One passenger has even claimed Abdulmutallab initially tried to board the aircraft without a passport, claiming he was from Sudan, in what may have been a further bid to avoid detection.
President Obama has ordered investigations into the screening of passengers at airports and the use of watch lists.