The Chicago Way - Year One 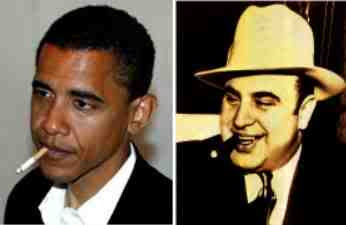 Judicial Watch announced the ten most corrupt politicans in Washington for 2009, and it's no surprise that nine of the ten are Democrats.

Let's focus on the big one, President Barack Obama:

Even before President Obama was sworn into office, he was interviewed by the FBI for a criminal investigation of former Illinois Governor Rod Blagojevich's scheme to sell the President's former Senate seat to the highest bidder. (Obama's Chief of Staff Rahm Emanuel and slumlord Valerie Jarrett, both from Chicago, are also tangled up in the Blagojevich scandal.)

The Obama administration made the startling claim that the Privacy Act does not apply to the White House. The Obama White House believes it can violate the privacy rights of American citizens without any legal consequences or accountability.

President Obama boldly proclaimed that "transparency and the rule of law will be the touchstones of this presidency," but his administration is addicted to secrecy, stonewalling far too many of Judicial Watch's Freedom of Information Act requests and is refusing to make public White House visitor logs as federal law requires.

The Obama administration turned the National Endowment of the Arts (as well as the agency that runs the AmeriCorps program) into propaganda machines, using tax dollars to persuade "artists" to promote the Obama agenda.

President Obama has installed a record number of "czars" in positions of power. Too many of these individuals are leftist radicals who answer to no one but the president. And too many of the czars are not subject to Senate confirmation (which raises serious constitutional questions).

Under the President's bailout schemes, the federal government continues to appropriate or control -- through fiat and threats -- large sectors of the private economy, prompting conservative columnist George Will to write: "The administration's central activity -- the political allocation of wealth and opportunity -- is not merely susceptible to corruption, it is corruption."

Government-run healthcare and car companies, White House coercion, uninvestigated ACORN corruption, debasing his office to help Chicago cronies, attacks on conservative media and the private sector, unprecedented and dangerous new rights for terrorists, perks for campaign donors – this is Obama's "ethics" record -- and we haven't even gotten through the first year of his presidency.