Jews for Obama. Why? 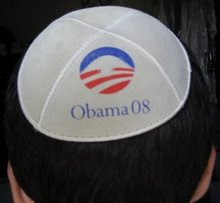 Jewish leaders in the US today predicted a big turnout among Jews in the November presidential election in favour of Barack Obama in spite of suspicion about his views on Iran and the Israeli-Palestinian conflict.

Ira Forman, executive director of the National Jewish Democratic Council, an advocacy group with strong links to the Democratic party, said: "I think Obama will win the Jewish vote by a large margin. The question is how much?"

Rabbi David Saperstein, director of the Religious Action Centre of Reform Judaism, said American Jews' traditional political affinity with African Americans, born of a shared experience of discrimination and the struggles of the civil rights era, could outstrip concerns among some Jewish voters that Obama is not pro-Israel enough.

"There is a great deal of pride and excitement about this moment in history as we see this real possibility of seeing a black president," he said.

Obama's visit to Israel is partly to counter criticism from his Republican rival, John McCain, that he lacks foreign policy experience but it is also to shore up support among Jews in the US. Although they make up only 3% of the electorate, Jews have been historically important, mainly as activists in the Democratic party and as generous donors. Unlike young voters and African-Americans who have in the past turned out in low numbers - but are both predicted to turn out in large numbers for Obama this time - Jews are dependable about casting their ballots.

Jews tend to be overwhelmingly Democrats, with 65% identifying themselves as Democratic or leaning Democratic, according to a June survey by the Pew Forum on Religion and Public Life, compared to 23% who identify as Republican or leaning Republican.

Forman said that while Jews are concentrated in places such as New York and California, which both vote Democratic anyway, there were also large numbers in states where the outcome is not as predictable: Florida, Ohio, Colorado, Pennsylvania, Nevada, Michigan and Wisconsin.

Forman acknowledged that African Americans and young voters are likely to defy past experience by turning out in large numbers for Obama but his campaign team would still be looking for Jewish votes. "When you are running a political campaign, you always make the assumption it will be a close race and you have to turn out all your constituencies heavily," Forman said.

Saperstein said Obama has been able to diffuse some of worries about his commitment to Israel, in part through his speech last month at a conference in Washington of the American Israel Political Affairs Committee, in which he promised that Jerusalem would be the undivided capital of Israel, even though he qualified this the next day to say this would be dependent on final negotiations with the Palestinians, who also claim it as their capital.