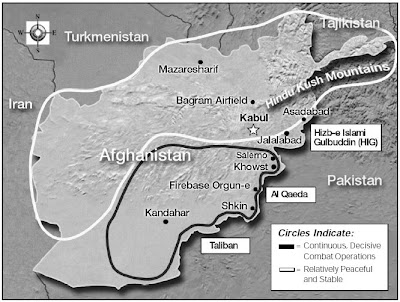 A suicide bomber has killed at least three people and hurt several more near Afghanistan's main US base during US Vice-President Dick Cheney's stay.
Mr Cheney, on an unannounced visit to the region, was staying at the Bagram base, 60km (40 miles) from Kabul.

The US military said the bomber was also killed in the blast, which earlier reports said killed 18 people.

The Taleban said they carried out the attack and that the attacker was trying to get to Mr Cheney.

A US spokesman described it as a "direct attack" on the base, which was put on red alert for a while. Mr Cheney was said to be safely inside the compound at the time.

One US and one South Korean soldier were among the dead.

Base operations commander Lt Col James Bonner said the bomber could not have got inside the base.

"Our security measures were in place and the killer never had access to the base," he said, quoted by AFP news agency.

"When he realised he would not be able to get onto the base he attacked the local population."

Mr Cheney had breakfast with troops at the base and left about 90 minutes after the blast.

Mr Cheney met President Karzai after the blast
He is now holding talks with Afghan President Hamid Karzai in Kabul.

A meeting between the two men scheduled for Monday had been delayed because of heavy snow.

Shortly before the Bagram blast, there was another suicide bomb in the southern town of Kandahar, killing at least one person.

The BBC's Charles Haviland in Kabul says Bagram is one of the most heavily guarded sites in Afghanistan and such incidents there are extremely rare.

The surrounding territory is heavily mined and people, including children, have frequently been injured by such devices.

Officials said the explosion occurred between the outside security gate and an inner gate guarded by US troops, some distance from living quarters at the base.

A trader in a market outside the base described the explosion as "huge", saying it shook market stalls.

Mr Cheney's visit to the region comes amid increasing concern about insurgent activity in several areas of Afghanistan.


Pakistan has thousands of troops near the border
There are fears of a spring offensive by the Taleban and its allies as the snows clear.

There are 27,000 US troops in Afghanistan, the highest number since the invasion of 2001, to combat any offensive.

Mr Cheney arrived in Afghanistan on Monday after holding talks with Pakistani President Pervez Musharraf during a brief stop in Islamabad.

He urged Pakistan to do more to combat the Taleban near the Afghan border, but also praised its role in the "war on terror".

His visit comes as the US seeks to send a tough message to Pakistan that aid to the country will be cut unless efforts to catch militants are stepped up.

Afghanistan and Pakistan share a 1,400 mile (2,250km) border, and many Taleban fighters operate from bases on the Pakistani side.