Express yo self. An elephant in the parlour. 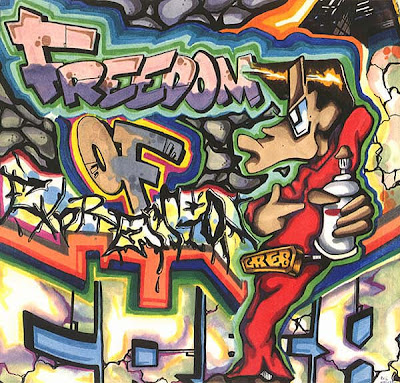 Speaking honestly is a declining commodity in most countries. It has rapidly declined in the US and has been doing so for some time. There is a lot of group think and thought discipline out there. Speaking openly in the US can cost you your job and position and will win you a label. Do so and you will be reduced to a category.

I try and practice that on this blog. Most of you do as well. We welcome your views and I challenge those that disagree with me or other posters to do so with vigor. If you cannot do it here, you will not be able to do it anywhere.

From the remaining free thinkers in The Netherlands:

It was carnival weekend. We'd been singing along to the old Dutch tune, "There's a Horse in the Hall," and our conga-line had ground to a sweaty halt. I'd been dancing behind a woman in a burqa, and I thought I might just be in with a chance. When suddenly, from under the veil, what do I hear but the basso profundo of my old mate Dion?

"It's yourself," says I. "Shame on you for giving me such a fright!" "Sorry," says Dion. "I was going to come dressed as the Prophet Muhammad - you know, turban, virgins, bombs - but they wouldn't let me in. Goes to show how little freedom we have in this country. It's like Geert always says: bloody left-wing church spoiling it for everyone."

Ah yes, controversial politician Geert Wilders. Whose far-right Freedom Party my old friend had joined, and who'd won nine seats in the Dutch elections last November. "Geert is right, you know," Dion went on. "If we're not careful we're going to have a Tsuslanimani. I mean, Sluttymasumi...eh, Tunasamullah..."

"You mean an Islam Tsunami," says I, trying to be helpful. "Ha!" says he. "So you agree! I always had you down as one of those left-wing types! Bloody left-wing church, spoiling it for everyone. You know, I was going to come dressed as the prophet..."

"Yeah, yeah," says I, "so how's old Geert doing these days? Still in hiding? I hear in Pakistan they want to hang him, and in Saudi Arabia they're demanding an official apology. What was it he said again? That Muslims have to tear up half the Qur'an or else they should leave the Netherlands."

From underneath the burqa came a throaty, drunken laugh. "Wasn't that sheer genius? Like asking Americans to tear up their flag, you know they start seeing red the moment you suggest it. Gets those Muslims right where he wants them."

"And where would that be?" says I. "Well, you remember Theo van Gogh and the film, Submission? You remember Ayaan Hirsi Ali? The Danish Cartoon row? That all took months before it exploded, but our Geert...the interview was only last week and already they want to kill him. Brilliant, eh?"

While I took a moment to let this profound statement sink in, Dion went on. "You know, there's an elephant in the parlour and it's called Islam. I read that somewhere on a website." "And what exactly is that supposed to mean?" says I. "Dunno" says he. "But an elephant is big and noisy and it leaves an enormous mess." "Just like Geert Wilders," says I.

Dion had begun to leer at me from behind the veil. "Say, are you one of those, what do you call them, dummies?" he said in a belligerent voice. "I believe the word you're looking for is 'dhimmi'" says I, "a non-Muslim who seeks the protection of Islam because he's afraid and agrees to live as a rightless slave."

"Whatever. Anyway, there's no place for dummies in a modern, civilized country like the Netherlands. Geert said that himself, and that if Muhammad were alive today, we should tar and feather him. Tar and feathers...that'll teach him to mess with a modern, civilized country." "Why don't we hack off his hands while we're at it," I suggested. "Or hang him upside down from the nearest tree? Erect a few burning crosses perhaps?"

"Just you wait," said Dion. "Nobody likes mockers like you. Take that fellow Ewout Jansen, the comedian. Some guy at a mosque in Amsterdam said he should be killed if he continued to make fun of Islam. Then some other guy from the same mosque denied it, and now he doesn't even know if he's to be killed or not! Yet everyone can make jokes about Geert Wilders' hairdo whenever they feel like it. It's just not fair."

"Well...you know what they say about types like Wilders," says I. "Hair today, gone tomorrow." We both laughed until we cried. For a brief moment, everything was silent. Then the conga-line started up again. "There's an Elephant in the Parlour," I'm sure I could hear them sing...

Disclaimer: The views expressed in this article are the personal views of the author, and do not necessarily represent the opinions of Radio Netherlands.( No irony intended)