Israel, Palestine and Iraq. Is the Bush Administration in a Listening Mood? 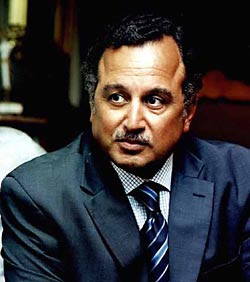 The US Administration is in a listening mood, Egypt's ambassador to Washington tells Dina Ezzat Al-Ahram

Nabil Fahmi
As Egypt's Ambassador to the US Nabil Fahmi knows better than most, the consequences of a break in the dialogue between the US and Egypt are negative. And while his mandate has always included promoting an exchange of views between Cairo and Washington, Fahmi believes American-Egyptian dialogue is especially crucial now, during a time when US policy on the Middle East is facing scrutiny in the US and elsewhere and as a consequence is entering a phase of revision.

In a telephone interview from his office in the US capital Fahmi told Al-Ahram Weekly that the current US administration's absorption with its problems in Iraq does not mean that it is unwilling to listen to the opinions of others on issues crucial to their mutual interests in the Middle East. The Palestinian-Israeli track of the Arab-Israeli peace process, he says, is one such area of concern.

Last week's visit to Washington by Foreign Minister Ahmed Abul-Gheit and Chief of Intelligence Omar Suleiman, says Fahmi, was crucial in communicating Egypt's position to the US administration which is, he says, "currently in a listening moment".

"Of course it would be naive to expect the Americans to immediately engage with the advice Egypt offered. It is too early to say whether the Americans will take our advice on board fully, partially or at all," says Fahmi. "But the point," he adds almost immediately, "had to be made."

Abul-Gheit's and Suleiman's agenda in Washington was, says Fahmi, varied and wide-ranging. They met with administration officials, members of Congress, think tanks and media representatives, and discussions covered many aspects of Egypt's bilateral relationship with the US as well as regional developments. "Yet it would be true to say some 90 per cent of discussions were spent on regional developments, especially the Palestinian-Israeli issue."

The Egyptian delegation's message was, Fahmi argues, simple and "to the point".

"Israelis and Palestinians need to talk about their outstanding disagreements and start negotiating final status issues and not interim matters as some have been suggesting."

Final status issues include the establishment of a Palestinian state, determining its borders in relation to Israel, the fate of East Jerusalem and that of hundreds of thousands of refugees.

It is a message, Fahmi acknowledges, that has been communicated to the Americans before -- most recently during last month's visit to Cairo by US Secretary of State Condoleezza Rice. Understanding, though not commitment, was the response of the Americans to Egypt's proposals; tellingly, Egypt's Ambassador to the US thinks it pertinent to repeat the messages conveyed less than a month before.

Fahmi is not blind to the fact that despite determined Egyptian efforts to communicate the need for movement on the Palestinian-Israeli track Washington might choose to pursue another route.

"What is important to realise," says Fahmi, "is that this administration still has almost two years in office. They will have to take decisions on many issues. They cannot remain undecided for ever."

"It is a different question, however, whether or not they take the decisions that we hope they will."

Fahmi worked hard before the ministerial visit, and continues to do so, to ensure the US administration, Congress, lobbies and press understand that it is in the interest of Arabs, Israelis and Americans alike to take serious steps towards resolving the Palestinian-Israeli conflict "even while the US is so busy with Iraq".

But what guarantees are there that should the Americans decide to move on the Palestinian-Israeli front they will do so more in pursuit of substantial results than simply scoring PR points?

"I think it is inaccurate to suggest that the Americans are only interested in theatrics," argues Fahmi. They want more than empty meetings, whether in or out of the Middle East, when it comes the Palestinian-Israeli issue. What is accurate, he adds, is that "the Americans are still thinking about their options."

While Egypt is pressing for final status talks "others have different opinions because they have different interests" which, he explains, contradict with the goal of establishing an independent and viable Palestinian state that can live side by side with Israel in peace.

While acknowledging that the "environment in Washington is very tense at the moment with everybody focused on Iraq" one of the obvious messages communicated to Washington during last week's ministerial visit was, says Fahmi, that the administration could show that it is still strong on foreign policy issues through contrasting its problems in Iraq with a success story on the Palestinian-Israeli front.

"It is important that Secretary Rice is returning to the region," says Fahmi. And while he is unwilling to make any predictions about the results of Rice's expected three-way meeting with Palestinian President Mahmoud Abbas and Israeli Prime Minister Ehud Olmert, he hopes "that the parties will encourage Rice to support moves towards discussing final status talks and that Rice in her turn will encourage the parties to do so".

He believes the talks conducted by Abul-Gheit and Suleiman with Rice in Washington last week were helpful in this respect and Egypt is "doing what it can do".

One of Egypt's aims, he says, is to engage the American administration on other issues of regional concern since this might help pave the way towards US action on the Palestinian issue. Egypt is working with the US to find "a fruitful policy" on Iraq, though it is fully aware this is a difficult short-term objective.

"Egypt, too, wants an end to the problems that Iraqis are facing. We want to maintain Iraq's unity," says Fahmi. And it is "part of Egypt's regional role" to consult with other concerned regional players, particularly Iraq's neighbours, in an attempt to help Iraqis move beyond their current difficulties and be able to jointly live in a unified and strong Iraq.

For Fahmi, the exchange of views that was conducted during the Abul-Gheit/ Suleiman visit to Washington on these and other regional issues -- including the need to engage Syria on the peace process and avoid lumping it together with Iran in terms of their respective roles in Iraq -- was significant. It "highlighted" the important nature of Egypt's regional role, both to an administration keen to work with reliable regional players and to the newly elected Congress.

Fahmi concedes that questions will inevitably continue to be raised about Egypt's commitment to reform and its human rights record. But, he says, "we are living in a transparent world... we accept questions and we answer them by way of informing our friends about our efforts."

"Americans see reform going on in Egypt, even if in a way that is not compatible with their visions, and they have decided that the best way to support it is to follow it rather than to interfere."

Overall, says Fahmi, last week's ministerial visit to Washington affirmed the solid foundations for the dialogue Egyptians and Americans conduct across issues of common interest and "issues of disagreement as well".

All visits have short- and long-term objectives. While last week's visit had the revival of the peace process as its short-term objective, says Fahmi, the longer-term goal was to remind all concerned of the vitality of the Egyptian-American relationship. Both objectives, he believes, were well-served.

This week Mouchira Khattab, secretary- general of the National Council for Motherhood and Childhood, will visit the US. Next month governmental and non- governmental trade delegations, that will include Minister of Trade and Industry Rachid Mohamed Rachid and Minister of Investment Mahmoud Moheiddin, are due for a tour of the US. Meanwhile, US Congress members are planning visits to Egypt in the weeks ahead. But what about President Hosni Mubarak, who has not visited Washington for three years now? Has last week's visit by Abul-Gheit and Suleiman paved the way for what used to be an annual presidential trip?

But given that the US is in a listening mood, does that not suggest the time is ripe for Mubarak to visit Washington?

"All visits," responds Fahmi diplomatically, "are possible, depending on the interests of both sides."