The Iranian Smoking Gun. This Post is in Error. General Dynamics Did Not Manufacture this gun and does not own Steyr Mannlicher. 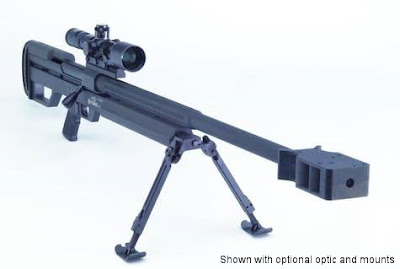 UPDATE: It appears that I have made a bad translation from some German language documents. The manufacturer of the arms sold to Iran were made by this company:

The Steyr Mannlicher GmbH & CO.KG is an Austrian firearm manufacturer, that came out from the former Austrian armament makers company, once part of the Steyr Daimler of Puch company. In October 2003 Steyr-Daimler-Puch Spezialfahrzeug GmbH, MOWAG GmbH and Santa Bárbara Sistemas was integrated into a single business unit, called European Land Combat Systems. This is owned by General Dynamics.

A wikipedia translation of a similiar document reads as follows:

"Steyr Daimler Puch special vehicle GmbH (SSF) is a formerly Austrian arms manufacturer, that was separated 1998 from the upper-Austrian Steyr Daimler Puch works, and sold to a Austrian group of investors. This sold SSF in the year 2003 to the US-American arms company general Dynamics, which integrated the enterprise into the European subsidiary „general Dynamics European country Combat of system “, which has its seat in Vienna, to which also Swiss MOWAG and the Spanish Santa Bárbara Sistemas belong.
The today's enterprise Steyr Daimler Puch special vehicle consists of parts of former Austrian armament makers, the Daimler engine company and the Puch works.
SSF is manufacturer of the Pandur Radpanzers, which was among other things already sold in the extent by 260 pieces at Portugal, which brought in 344 million euro for the enterprise, and in the extent by 234 pieces starting from the year 2007 to the Czech military one delivers, which will bring in 828 million euro. The large difference in amount of proceeds is to be explained thereby that Portugal paged a large part out of the order to domestic enterprises, during however Tschechien the wheel tank completely in Austria, in the SSF work in the Viennese municipality district Simmering, to manufacture leaves.
SSF is subject to the strict regulations of the neutrality act from the convention as Austrian enterprise, why weapons and munition may not be supplied to „crisis regions “. Since the definition of the legal text leaves however interpretation clearance open, to the enterprise in the year 2001 on the one hand the export from 66 troop transporters was permitted to Simbabwe, briefly before the European Union imposed a weapons embargo against this country, on the other hand one may Steyr Mannlicher, a rifle manufacturer likewise from the Steyr Daimler Puch works came out, no exports to South America to transact, how the ministry of the Interior decided."

Audio Listen here, using the link: Revelation makes US action against Iran more likely, says Thomas Harding
Austrian sniper rifles that were exported to Iran have been discovered in the hands of Iraqi terrorists, The Daily Telegraph has learned.

More than 100 of the.50 calibre weapons, capable of penetrating body armour, have been discovered by American troops during raids.


The Steyr HS50 is a long range, high precision rifle
The guns were part of a shipment of 800 rifles that the Austrian company, Steyr-Mannlicher, exported legally to Iran last year.

The sale was condemned in Washington and London because officials were worried that the weapons would be used by insurgents against British and American troops.

Within 45 days of the first HS50 Steyr Mannlicher rifles arriving in Iran, an American officer in an armoured vehicle was shot dead by an Iraqi insurgent using the weapon.

Over the last six months American forces have found small caches of the £10,000 rifles but in the last 24 hours a raid in Baghdad brought the total to more than 100, US defence sources reported.


The find is the latest in a series of discoveries that indicate that Teheran is providing support to Iraq's Shia insurgents.

Mahmoud Ahmadinejad, the Iranian president, yesterday denied that Iran had supplied weapons to Iraqi insurgents. But on Sunday US officials in Baghdad displayed a range of weapons they claimed had originated in Iran.

They said 170 American and British soldiers had been killed by such weapons.

The discovery of the sniper rifles will further encourage those in Washington who want to see Iran's uranium-enriching facilities destroyed before a nuclear weapon is produced.

The Foreign Office expressed "serious concerns" over the sale of the rifles last year and Britain protested to the Austrian government.

A Foreign Office spokesman said last night: "Although we did make our worries known the sale unfortunately went ahead and now the potential that these weapons could fall into the wrong hands appears to have happened."

The rifle can pierce all body armour from up to a mile and penetrate armoured Humvee troop carriers.

It is highly accurate and fires a round called an armour piercing incendiary, a bullet that the Iranians manufacture.

The National Iranian Police Organisation bought the rifles allegedly to use them against drug smugglers in an £8 million order placed with Steyr in 2005.

The company was given permission to export them by the Austrian government, which is not a Nato member. Guess who owns the company?

General Dynamics was officially established in 1952, although it has organizational roots dating back to the late 1800s. The company was formed after its predecessor and current operating division, Electric Boat, acquired the aircraft company Canadair Ltd. and began building the first nuclear-powered submarine, USS Nautilus.