Here is what happens when you let manufacturing be pirated by men in striped suits: 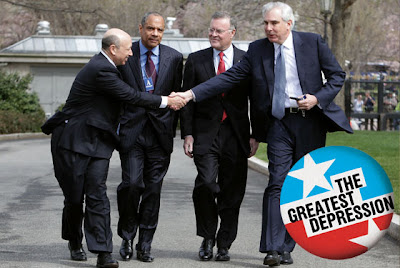 Why are these scum suckers not wearing horizontal stripes?
The biggest pile of steaming hot bullshit shoveled to the public by our rulers and masters and their lords in banking and Wall Street is that creative destruction is a good thing. Break and wreck domestic business and industry for the purpose of getting larger momentary financial returns to the investor and shift the manufacturing to China.

It is further argued that higher valued manufacturing will be shifted upstream to more productive industries. Well here is the evidence of the logical consequence of this fraud:

Germany, France and England cannot muster the engineers to develop and manufacture the next generation of aircraft engines.

There is no report of an insufficient supply of bankers and lawyers.

Airbus looks to India to bridge skills gap
Airbus, the world's biggest aeroplane maker, will carry out a greater proportion of engineering work in India in the future as a direct result of a dearth of qualified engineers in the UK, Germany and France.

The company's board will decide this week whether to go ahead with its next development programme, a new engine for the single-aisle A320 plane that generates much of Airbus's profit.

The programme, known as NEO (new engine option), may yet be put off or abandoned because of a lack of engineers, said Tom Enders, chief executive.

The company's technical expertise is tied up with getting the A380 superjumbo ready for full production and developing the new A350, made with a greater share of composites than any of Airbus's previous planes.

"Airbus has never made a secret that our engineering resources are stretched thin," Mr Enders said during a two-day visit to Airbus's Indian operations in Bangalore last week.

"We're taking this decision very seriously because we cannot afford that other programmes, especially the 350, should suffer."
There is an 80pc chance that Airbus will go ahead with the new engine, according to reports last week, but the plan still needs approval from Airbus executives and EADS, its parent company.

At its base in Bangalore, Airbus has 160 engineers working on the A350 and A380 programmes in conjunction with staff in France, Germany and Britain.

India produces around 350,000 engineering graduates a year, about 25pc of which Airbus describes as "employable".

"I don't think 400 is going to be the final number, there is a huge pool of talent we can tap into," said Mr Enders. "In terms of the work we sub-contract, there's a lot more to come."

In the past, most of the work done for Airbus by external suppliers has been making parts of the airframe, and while some manufacturing work is now being done in India, it is the engineering and technology base that is more attractive, Mr Enders said.
"IT, simulations, technical publication - all these are things which India is particularly good at," he said.

Engineering staff in India are cheaper to employ than in Europe, although the company declined to say what the difference in average salaries is.

Airbus expects to do around $1bn (£632m) of business in India in the next decade, with local companies such as Tata, Mahindra and state-owned Hindustan Aeronautics. The last two are also joint-venture partners of BAE Systems.

Airbus has no plans for now to build a final assembly line in India like the one which opened in Tianjin, China in 2008.
Airbus expects India to need around 1,000 new planes over the next 20 years, compared with 3,000 in China. Air traffic has expanded by 16pc in India this year.

Mr Enders said jobs at Airbus's manufacturing and design sites in Filton and Broughton, Toulouse, and Hamburg are not as risk from work being done in India for now.

"I will not guarantee jobs but right now our immediate concern is that we ramp up production and find good people."