Why do we keep the White House open, ever? Let’s just shut it down, permanently.

What is the purpose of the White House? Is it a symbol of honor, dignity, nationalism or is it some vulgar palace of vanity to an American myth? The White House is a relic that has been reduced to a sham.  How do I know that? Let’s take a peak at what the current occupant, His Highness Barack and Flotus Lady Michelle have up on the whitehouse.gov website:

Now some of the details: 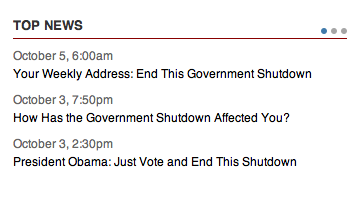 We may as well put up electronic billboards on it.


MORE SHUTDOWN THEATER, COMING TO YOU VIA ARMED FORCES RADIO
HUMAN  EVENTS
Barack Obama’s not just keeping elderly World War II veterans away from their memorial.  He’s keeping current military forces away from their football and baseball games, too.  ”Due to the government shutdown, the Defense Department can only provide limited overseas television, radio, print, and web services,” the Armed Forces Network website announced.
But rest assured there’s money to keep Camp David – the presidential retreat Obama usually disdains in favor of more expensive remote destinations, although he says he frequently shoots skeet there – up and running, according to the Washington Examiner.
Meanwhile, that World War II memorial is blocked off with even more barricades… and now they’re wired shut.  Vice President Joe Biden offered personal thanks to the Park Service employee who stood her ground against the veterans.  Suffer the wrath of an aroused bureaucracy, war heroes!
Shutdown Theater takes to the seas in Florida, as Obama’s troops in the National Park Service informed charter fishing boats “they are not permitted to take clients fishing in Florida Bay until the feds get back to work,” according to the Miami Herald.  “That means that more than 1,100 square miles of prime fishing is off limits, between the southern tip of the mainland to the Keys, until further notice.”  The ban also extends to tour guides.  No paddling until Obama gets his money!  Doubtless the Administration will hire as many people as it takes to enforce the “shutdown.”
Not everyone in the Park Service is comfortable with their new role as shutdown shock troops.  ”It’s a cheap way to deal with the situation,’ one ranger is quoted as saying by the Washington Times.  ”We’ve been told to make life as difficult for people as we can.  It’s disgusting.”
Some government websites are rather… conspicuously closed.  For example, if you visit the Federal Trade Commission website, everything that would normally be running more or less automatically has been blocked off behind a page that says, “Unfortunately, the Federal Trade Commission is closed due to the government shutdown.”  As anyone who has tried to sign up for ObamaCare knows, a truly non-functional web site responds with an error message.
A senior Administration official pronounced the White House satisfied with its efforts to discipline the unruly populace, saying “it doesn’t really matter to us” how long the shutdown goes on, “because what matters is the end result.”  That’s an interesting companion piece with Senate Majority Leader Harry Reid’s callous dismissal of pediatric cancer patients.  Who cares how long people are hurting, as long as the media makes sure they’re angry with Republicans, and the ruling class continues to enjoy its perks and privileges?
White House spokesman Jay Carney tumbled out of the Administration clown car to “utterly disavow” this remark, while House Speaker John Boehner growled, “This isn’t some damn game.  The American people don’t want their government shut down, and neither do I.  All we’re asking for is to sit down and have a discussion, and to reopen the government and bring fairness to the American people under Obamacare.  It’s as simple as that.  But it all has to begin with a simple discussion.”
The White House is openly soliciting “how has the government shutdown affected you?” stories on its blog, while good old Harry Reid mercilessly strangles every bill that would fund government services.  Sounds like a game to me, and not a very good one.
Update: When Shutdown Theater came to Wisconsin, Governor Scott Walker said “no.”  The federal National Park Service ordered Wisconsin officials to close several parks, including some areas that are actually owned by the state, but Walker’s administration refused.  ”All state parks, trails, and other recreational properties are open and not affected by the federal government’s budget problems,” proclaimed the Wisconsin Department of Natural Resources.
Update: Rep. Lee Terry (R-NE) accuses President Obama of illegally furloughing two thousand civilian defense contractors at Offutt Air Force Base, a violation of the Pay Our Military Act that was duly passed and signed last week.
Funny, I thought Obama was big on obeying “the settled law of the land.”  Oh, wait, silly me – he thinks you little people should have to obey those laws, not His August Majesty.
Posted by Deuce ☂ at 10/06/2013 06:22:00 AM