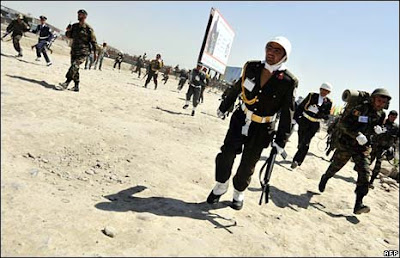 The BBC has this video. It looks eerily similiar to the setting when Sadat was assassinated in Egypt three decades ago. One day ago this was the headline:

WASHINGTON (AFP) — Afghan President Hamid Karzai urged US forces Saturday to stop arresting suspected Taliban and their sympathizers, arguing that these arrests and past mistreatment were discouraging Taliban from laying down their arms.
The New York Times said the Afghan president, in an interview, also criticized the allied conduct of the war and demanded that his government be given the lead in policy decisions.
Karzai said the real terrorist threat lay in sanctuaries of the Taliban and Al-Qaeda in Pakistan. He argued that civilian casualties needed to end completely.
"For the success of the world in Afghanistan, it would be better to recognize this inherent character in Afghanistan and work with it and support it," The Times quoted him as saying in the interview. "Eventually, if the world is to succeed in Afghanistan, it will be by building the Afghan state, not by keeping it weak."
Karzai, who has been in office six years, is facing re-election next year. With the polls approaching, some diplomats have even expressed dismay that, for lack of an alternative, the country and its donors may face another five years of poor management by Karzai, the paper said.
But the Afghan president was quick to reject such criticism, pointing out "immense difficulties" his government had faced, according to The Times.
"What is it we have not gone through?" Karzai was quoted as asking.
The president also called for greater respect for Afghanistan on the part of its foreign partners.


Afghan President Hamid Karzai and other dignitaries have survived a Taliban attack on a ceremony in Kabul.

Government and military hospital officials said at least nine people, including two lawmakers, were wounded in the attack.

The gunfire erupted after Mr. Karzai and other dignitaries had taken the stage following an inspection of troops.

Taliban spokesman Zabihullah Mujahid quickly claimed responsibility for the attack, saying his fighters had fired rockets and automatic weapons at the dais where the dignitaries were seated. The spokesman said three Taliban fighters were killed.

Afghan state television abruptly cut its live transmission of the high-profile ceremony, marking the 16th anniversary of the fall of the communist government in Afghanistan to the mujahedin and the withdrawal of Soviet troops from the country.