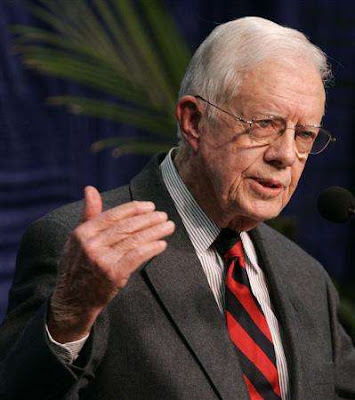 "On the way home from monitoring the Nepalese election, I, my wife and my son went to Israel. My goal was to learn as much as possible to assist in the faltering peace initiative endorsed by President Bush and Secretary of State Condoleezza Rice."
Most Presidents, at the end of their terms, are pleased to return to privacy. Few become addicted to celebrity. I doubt we will hear much from George Bush as we didn't from his father and for that matter Reagan, Ford, Nixon, Johnson, Eisenhower and Truman. Then there is Bill Clinton and Jimmy Carter.

Neither Clinton or Carter seem capable of exiting stage left. Clinton needs the light and Carter fears the darkness. Carter cannot accept the fact that he is not needed, and not invited. He also has devolved into that weird Bob Dole state of referring to himself in the third-party. With Carter it is "the Carter Center". I guess that is the point; Carter being in the Center.

A COUNTERPRODUCTIVE Washington policy in recent years has been to boycott and punish political factions or governments that refuse to accept United States mandates. This policy makes difficult the possibility that such leaders might moderate their policies.

Two notable examples are in Nepal and the Middle East. About 12 years ago, Maoist guerrillas took up arms in an effort to overthrow the monarchy and change the nation’s political and social life. Although the United States declared the revolutionaries to be terrorists, the Carter Center agreed to help mediate among the three major factions: the royal family, the old-line political parties and the Maoists.

In 2006, six months after the oppressive monarch was stripped of his powers, a cease-fire was signed. Maoist combatants laid down their arms and Nepalese troops agreed to remain in their barracks. Our center continued its involvement and nations — though not the United States — and international organizations began working with all parties to reconcile the dispute and organize elections.

The Maoists are succeeding in achieving their major goals: abolishing the monarchy, establishing a democratic republic and ending discrimination against untouchables and others whose citizenship rights were historically abridged. After a surprising victory in the April 10 election, Maoists will play a major role in writing a constitution and governing for about two years. To the United States, they are still terrorists.

On the way home from monitoring the Nepalese election, I, my wife and my son went to Israel. My goal was to learn as much as possible to assist in the faltering peace initiative endorsed by President Bush and Secretary of State Condoleezza Rice. Although I knew that official United States policy was to boycott the government of Syria and leaders of Hamas, I did not receive any negative or cautionary messages about the trip, except that it might be dangerous to visit Gaza.

The Carter Center had monitored three Palestinian elections, including one for parliamentary seats in January 2006. Hamas had prevailed in several municipal contests, gained a reputation for effective and honest administration and did surprisingly well in the legislative race, displacing the ruling party, Fatah. As victors, Hamas proposed a unity government with Mahmoud Abbas of Fatah as president and offered to give key ministries to Fatah, including that of foreign affairs and finance.

Hamas had been declared a terrorist organization by the United States and Israel, and the elected Palestinian government was forced to dissolve. Eventually, Hamas gained control of Gaza, and Fatah is “governing” the Israeli-dominated West Bank. Opinion polls show Hamas steadily gaining popularity. Since there can be no peace with Palestinians divided, we at the Carter Center believed it important to explore conditions allowing Hamas to be brought peacefully back into the discussions. (A recent poll of Israelis, who are familiar with this history, showed 64 percent favored direct talks between Israel and Hamas.)

We met with Hamas leaders from Gaza, the West Bank and Syria, and after two days of intense discussions with one another they gave these official responses to our suggestions, intended to enhance prospects for peace:
In addition, Syria’s president, Bashir al-Assad, has expressed eagerness to begin negotiations with Israel to end the impasse on the Golan Heights. He asks only that the United States be involved and that the peace talks be made public.

Through more official consultations with these outlawed leaders, it may yet be possible to revive and expedite the stalemated peace talks between Israel and its neighbors. In the Middle East, as in Nepal, the path to peace lies in negotiation, not in isolation. 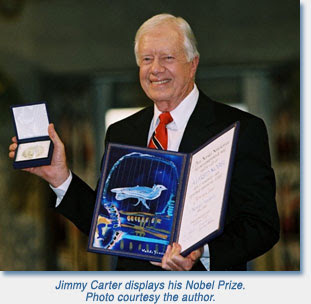