Al Sharpton to Close down NYC. Obama Must Be Pleased. 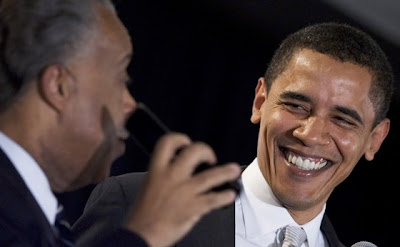 The only thing worse for the Obama candidacy would be for Reverend Wright to use his pastoral skills to help Al Sharpton shut down New York. That ought to be good for another 5-7 point drop for Obama in the upcoming primaries. Sharpton has a keen sense of timing and knows just when to be diplomatic.

NEW YORK (AP) - Hundreds of angry people marched through Harlem on Saturday after the Rev. Al Sharpton promised to "close this city down" to protest the acquittals of three police detectives in the 50-shot barrage that killed a groom on his wedding day and wounded two friends.

"We strategically know how to stop the city so people stand still and realize that you do not have the right to shoot down unarmed, innocent civilians," Sharpton told an overflow crowd of several hundred people at his National Action Network office in the historically black Manhattan neighborhood. "This city is going to deal with the blood of Sean Bell."

Sharpton was joined by the family of 23-year-old Sean Bell - a black man - and a friend of Bell who was wounded in the 2006 shooting outside a Queens strip club. Two of the three officers charged were also black.

The rally at Sharpton's office was followed by a 20-block march down Malcolm X Boulevard and then across 125th Street, Harlem's main business thoroughfare, where some bystanders yelled out "Kill the police!"

Fifty of the marchers carried white placards bearing big black numbers for each of the police bullets fired at Bell and his friends.

Sharpton urged people to return for a meeting this coming week "to plan the day that we will close this city down" with the kind of "massive civil disobedience" once led by Rev. Martin Luther King Jr.

"They never accused Sean Bell of doing anything. Then why is he dead?" Sharpton asked, his voice roaring with anger. Authorities "have shown now that they will not hold police accountable. Well, guess what? If you won't, we will!"

"Shut it down! Shut it down!" the crowd chanted, standing up and applauding wildly.
Sharpton didn't say exactly how they would protest the acquittals of the officers who fired the 50 shots. He said Bell's supporters could demonstrate all over the city, from Wall Street to the home of Justice Arthur Cooperman, who on Friday acquitted the three detectives after a nonjury trial.

Sitting behind Sharpton as he spoke were Bell's parents, his sister and Nicole Paultre Bell, who took her fiance's name after his death.

"The justice system let me down," Paultre Bell told the crowd in a soft voice. "April 25, 2008: They killed Sean all over again. That's what it felt like to us."

It was her first public comment since she stormed out of a courtroom Friday after the NYPD detectives were cleared in Bell's killing as he left his bachelor party.
One of Bell's companions, Joseph Guzman, also spoke briefly on Saturday, saying: "We've got a long fight."