Would an Iraqi Tito help? Would it prevent a much worse scenario? 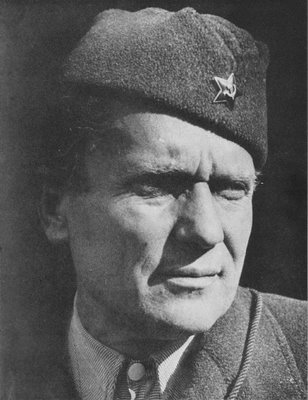 The dream of an Iraq democracy is over. It is never going to happen. That is my opinion and is obviously open to discussion and other points of view. Regardless, it will have no affect on what will ultimately happen in Iraq.

There is no scenario that will see a smooth change of governments in a democratic fashion.

At best, Iraq will end in a Yugoslavia-lite or it will go directly into a fragmentation mode with ethnic cleansing and come apart in a bloody brutal fashion. Could an Iraq Tito help? Should we encourage that or make it happen?


There clearly are even worse options. The Brookings Institution, a center-left think tank, based in Washington , contemplates a worse situation.

By Rupert Cornwell in Washington
Published: 30 January 2007
The Independent


The US must draw up plans to deal with an all-out Iraqi civil war that would kill hundreds of thousands, create millions of refugees, and could spill over into a regional catastrophe, disrupting oil supplies and setting up a direct confrontation between Washington and Iran.

This is the central recommendation of a study by the Brookings Institution here, based on the assumption that President Bush's last-ditch troop increase fails to stabilise the country - but also on the reality that Washington cannot simply walk away from the growing disaster unleashed by the 2003 invasion.

Even the US staying to try to contain the fighting, said Kenneth Pollack, one of the report's authors, "would consign Iraqis to a terrible fate. Even if it works, we will have failed to provide the Iraqis with the better future we promised." But it was the "least bad option" open to the US to protect its national interests in the event of full-scale civil war.

US troops, says the study, should withdraw from Iraqi cities. This was "the only rational course of action, horrific though it will be", as America refocused its efforts from preventing civil war to containing its effects.

The unremittingly bleak document, drawing on the experience of civil wars in Lebanon, the former Yugoslavia, Congo and Afghanistan, also offers a remarkably stark assessment of Iraq's "spill-over" potential across the Persian Gulf region.

It warns of radicalisation and possible secession movements in adjacent countries, an upsurge in terrorism, and of intervention by Iran, Turkey and Saudi Arabia. Ending an all-out civil war, the report says, would require a force of 450,000 - three times the present US deployment even after the 21,500 "surge" ordered by President Bush this month.

Everywhere looms the shadow of Iran. In a "war game" testing US options, the Saban Centre for Middle East Policy at the Brookings Institution found that, as the descent into civil war gathered pace, confrontation between the US and Iran intensified, and Washington's leverage on Tehran diminished. Civil war in Iraq would turn Iran into "the unambiguous adversary" of the US.

Indeed, everything indicates that that is already happening. The study appeared on the same day as the Iranian ambassador in Iraq told The New York Times that Tehran intended to expand its influence in Iraq. US commanders now claim that thousands of Iranian advisers are arming and training Shia militias.

Nonetheless, the Brookings report urges the creation of a regional group to help contain a civil war. That would see exactly the contacts with Iran and Syria that the Bush administration steadfastly refuses. An alternative in the report would be "red lines" which, if crossed by Tehran, could lead to a military attack by the US on Iran.