Protests on the Washington Mall Sponsored By... 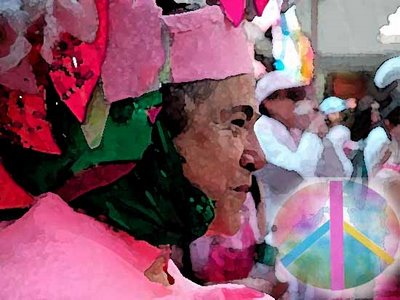 United for Peace and Justice is the chief sponsor and organizer of the Washington protests.

United For Peace and Justice (UFPJ) is an anti-war coalition consisting of more than 1,300 local and national groups joined together "to protest the immoral and disastrous Iraq War and oppose our [American] government's policy of permanent warfare and empire-building." The coalition's Unity Statement denounces "the 'pre-emptive' wars of aggression waged by the Bush administration" in its "drive to expand U.S. control over other nations and strip us of our rights at home under the cover of fighting terrorism and spreading democracy."

In an effort to diminish the potential calamities that might result from what UFPJ characterizes as America's aggressive pursuit of world domination, the coalition has launched a Nuclear Disarmament Campaign. "The world," it says, "is destined to find itself in a state of perpetual war so long as the United States maintains its bloated nuclear arsenal. Nuclear disarmament must become a core issue on the global peace movement's agenda."

UFPJ was officially created on October 25, 2002 in the Washington, DC offices of People For the American Way. Its initial membership consisted of approximately 70 organizations. Prior to UFPJ's founding, the anti-war movement had earned a reputation as a hodgepodge of radical elements. All the large-scale peace demonstrations to that point had been held under the auspices of International ANSWER, an organization aligned with the Marxist-Leninist Workers World Party; Global Exchange, headed by the longtime pro-Castro communist Medea Benjamin; and Not In Our Name, a project organized by Ramsey Clark and fellow leaders of the Revolutionary Communist Party. United For Peace and Justice was created explicitly to put a milder face on the anti-war movement, although from its inception UFPJ shared with the aforementioned groups a passionate hatred for the United States and for capitalism.

The Co-Chair and principal leader of UFPJ is Leslie Cagan, an original founder of the Committees of Correspondence (a remnant organization created by the American Communist Party upon going out of business) and a strong supporter of Fidel Castro since the 1960s; Cagan proudly aligns her politics with those of Communist Cuba.