"One of the Most Important Military Men in the World." 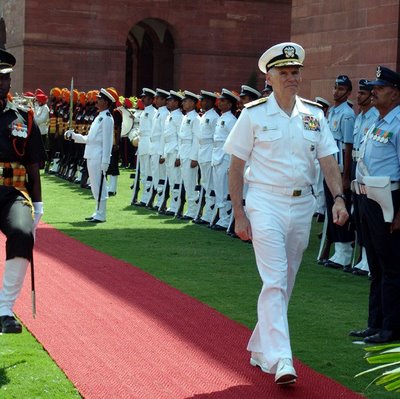 President George W Bush has nominated the top military commander in the Pacific, Admiral William Fallon, as the new head of US Central Command. If confirmed, he will replace Gen John Abizaid in a move which will put a navy man in charge of overseeing the Middle East and two land wars - Iraq and Afghanistan.
ADMIRAL WILLIAM J. FALLON, USN Commander, U.S. Pacific Command
Admiral Fallon’s Bio at US Pacific Command

Admiral Fallon began his Naval Aviation service flying in the RA-5C Vigilante with a combat deployment to Vietnam, transitioning to the A-6 Intruder in 1974. He served in flying assignments with Attack Squadrons and Carrier Air Wings for twenty-four years, deploying to the Mediterranean Sea, Atlantic, Pacific and Indian Oceans embarked in USS Saratoga, USS Ranger, USS Nimitz, USS Dwight D. Eisenhower and USS Theodore Roosevelt. He has logged more than 1,300 carrier arrested landings and 4,800 flight hours in tactical jet aircraft.

So, who is Admiral Fallon and what makes him the man?

Grim included this in a September post over at the Fourth Rail:

As Robert Kaplan noted in his Atlantic Monthly piece of June 2005, PACOM has become the real center of gravity of US military power, which is a type and degree of power that generates and carries on its own diplomacy. Admiral Fallon, though his name is unknown to most Americans, is one of the most important military men in the world.

Doug has mentioned in passing some thoughts about the Admiral that are echoed by commenters at the Confederate Yankee:

Sinking The Admiral
In addition, Admiral Fallon has restricted U.S efforts to conduct intelligence -gathering operations against China, leading us to be even more in the dark ...

One very interesting thing in the Confederate Yankee post is this observation:

The Song-class submarine may have targeted Admiral Fallon's carrier group, but by leaking the story to Bill Gertz when they did, it is clearly the intention of the Department of Defense to sink Fallon and a program that they consider to be a risk to national security.

Bill Gertz at the Washington Times has reported nothing about Fallon since the announcement but this is an interesting bit of news that shows that more than one group has a reason to torpedo the Admiral's nomination.

CIA on China threat
CIA Director Michael V. Hayden spoke to CIA employees yesterday for a town -hall-style meeting where he revealed the agency's new "Strategic Intent" report and outlined some of the reforms taken. They include setting up a new operations center with representatives from the collection, analysis and technical services branches.

The report lists the long war on terrorism, arms proliferation and the rise of China and India as part of the current "unstable and dangerous " strategic environment.

So far, it looks as though Admiral Fallon’s claim to fame and infamy is developing Sino-US military relations; a position which brings him into conflict with China Hawks at the DoD, the Pentagon and the CIA. Perhaps the President has chosen Fallon to reassure the Chinese regarding US intentions toward Iran. Maybe Fallon's aviation experience will serve the military goals of Navy close air support of Army units. More and more we are seeing Air Force and Navy personnel retrained and reassigned to ground combat units. Maybe the US military is evolving even more than we realize. Maybe one day we'll be down to nothing but two services, Navy and Marines.