The US Department of Education Is Sending A Bi-Partisan Road Show, US Representative Twat, (D, NY) and US Senator Dick, (R, AZ ) to All The Best Schools to Explain The Difference to the Confused Fragile Intelligenstsia 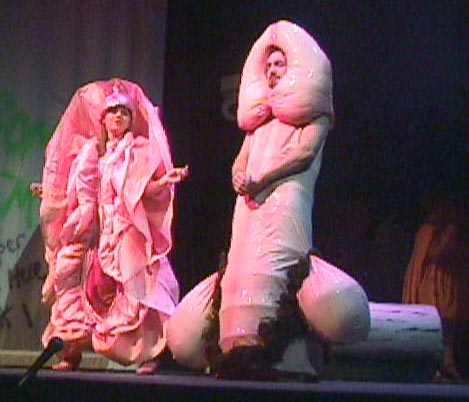 WASHINGTON — President Trump on Wednesday rescinded protections for transgender students that had allowed them to use bathrooms corresponding with their gender identity, overruling his own education secretary and placing his administration firmly in the middle of the culture wars that many Republicans have tried to leave behind.

In a joint letter, the top civil rights officials from the Justice Department and the Education Department rejected the Obama administration’s position that nondiscrimination laws require schools to allow transgender students to use the bathrooms of their choice.

That directive, they said, was improperly and arbitrarily devised, “without due regard for the primary role of the states and local school districts in establishing educational policy.”

The question of how to address the “bathroom debate,” as it has become known, opened a rift inside the Trump administration, pitting Education Secretary Betsy DeVos against Attorney General Jeff Sessions. Mr. Sessions, who had been expected to move quickly to roll back the civil rights expansions put in place under his Democratic predecessors, wanted to act decisively because of two pending court cases that could have upheld the protections and pushed the government into further litigation.

But Ms. DeVos initially resisted signing off and told Mr. Trump that she was uncomfortable because of the potential harm that rescinding the protections could cause transgender students, according to three Republicans with direct knowledge of the internal discussions.

Mr. Sessions, who has opposed expanding gay, lesbian and transgender rights, pushed Ms. DeVos to relent. After getting nowhere, he took his objections to the White House because he could not go forward without her consent. Mr. Trump sided with his attorney general, the Republicans said, and told Ms. DeVos in a meeting in the Oval Office on Tuesday that he wanted her to drop her opposition. And Ms. DeVos, faced with the alternative of resigning or defying the president, agreed to go along.

Ms. DeVos’s unease was evident in a strongly worded statement she released on Wednesday night, in which she said she considered it a “moral obligation” for every school in America to protect all students from discrimination, bullying and harassment.

She said she had directed the Education Department’s Office for Civil Rights to investigate all claims of such treatment “against those who are most vulnerable in our schools,” but also argued that bathroom access was not a federal matter.
Gay rights supporters made their displeasure clear. Outside the White House, several hundred people protested the decision, chanting, “No hate, no fear, trans students are welcome here.”

Individual schools will remain free to let transgender students use the bathrooms with which they are most comfortable. And the effect of the administration’s decision will not be immediate because a federal court had already issued a nationwide injunction barring enforcement of the Obama order.

The dispute highlighted the degree to which transgender rights issues, which Mr. Trump expressed sympathy for during the campaign, continue to split Republicans, even as many in the party argue that it is time to move away from social issues and focus more on bread-and-butter pocketbook concerns.

Within the administration, it also threatened to become another distraction for Mr. Trump after a tumultuous first month in office. And it showed how Mr. Trump, who has taken a more permissive stance on gay rights and same-sex marriage than many of his fellow Republicans, is bowing to pressure from the religious right and contradicting his own personal views.

Social conservatives, one of Mr. Trump’s most loyal constituencies, applauded him for honoring a pledge he had made to them during the campaign. They had argued that former President Barack Obama’s policy would allow potential sexual predators access to bathrooms and create an unsafe environment for children.
“The federal government has absolutely no right to strip parents and local schools of their rights to provide a safe learning environment for children,” said Tony Perkins, president of the Family Research Council.

But supporters of transgender rights said the Trump administration was acting recklessly and cruelly. “The consequences of this decision will no doubt be heartbreaking,” said Chad Griffin, president of the Human Rights Campaign. “This isn’t a states’ rights issue; it’s a civil rights issue.”

Bathroom access emerged as a major and divisive issue last March when North Carolina passed a bill barring transgender people from using bathrooms that do not match the sex on their birth certificate. It was part of a broader bill eliminating anti-discrimination protections for gay and transgender people.
Gay, lesbian, bisexual and transgender issues became a point of attack for opponents of Ms. DeVos’s nomination last month, as Democrats questioned her about the extensive financial support that some of her relatives — part of her wealthy and politically active Michigan family — had provided to anti-gay causes. Ms. DeVos distanced herself from her relatives on the issue, saying their political activities did not represent her views.

While Wednesday’s order significantly rolls back transgender protections, it does include language stating that schools must protect transgender students from bullying, a provision Ms. DeVos asked for, one person with direct knowledge of the process said.

“All schools must ensure that students, including L.G.B.T. students, are able to learn and thrive in a safe environment,” the letter said, echoing Ms. DeVos’s comments at her confirmation hearing but not expressly using the word transgender. Ms. DeVos, who has been quietly supportive of gay rights for years, was said to have voiced her concern about the high rates of suicide among transgender students. In one 2016 study by the Cincinnati Children’s Hospital Medical Center, for instance, 30 percent reported a history of at least one suicide attempt.

Mr. Trump appears to have been swayed by conservatives in his administration who reminded him that he had promised during the campaign to leave the question of bathroom use to the states.

But he had given conflicting signals on the issue, and on gay rights more broadly. He said last April, for instance, that he supported the right of transgender people to “use the bathroom they feel is appropriate,” and added that Caitlyn Jenner, perhaps the most famous transgender person in the country, could use whichever bathroom at Trump Tower she wanted. He has also called the Supreme Court decision legalizing same-sex marriage settled law. “And I’m fine with that,” he told CBS News after the November election.

Despite his personal views, Mr. Trump’s decisions in office have been consistently conservative on social issues. And he has shown considerable deference to the religious right, naming many religious conservatives to top cabinet posts and pledging to fight for religious freedom protections and restrictions on abortion.
The Justice Department is eager to move quickly in laying out its legal position on transgender policy, to avoid confusion in cases moving through the courts.
The dispute has underscored the influence that Mr. Sessions, an early and ardent supporter of Mr. Trump, is likely to exercise over domestic policy. As someone who has a long record of opposing efforts to broaden federal protections on a range of matters under his purview — immigration, voting rights and gay rights, for example — he has moved quickly to set the Justice Department on a strikingly different course than his predecessors in the Obama administration.