The Russians Never Change, US Presidents Do. 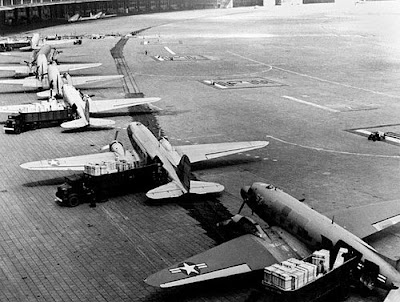 Anyone who follows this blog knows of my contempt for the way in which George W. Bush has diminished our country. Some presidencies have elevated the respect and power of America. I challenge anyone to identify a President that has done more to weaken the Great United States of America through sheer incompetence and dereliction of duty the George Bush, the lessor.

This article caught my attention and reminded me of a time the Russians tried to choke the Berliners from fuel in the winter of 1948. President Harry Truman was in a re-election campaign, presented with his lowest approval rating and the threat of World War III with the Soviet Union over a developing situation in Berlin. It started in the previous summer when The Soviets then cut all surface traffic to West Berlin on June 27.

American ambassador to Britain, John Winnant, stated the accepted Western view when he said that he believed "that the right to be in Berlin carried with it the right of access." The Soviets, however, did not agree. Shipments by rail and the autobahn came to a halt. A desperate Berlin, faced with starvation and in need of vital supplies, looked to the West for help.

The order to begin supplying West Berlin by air was approved later by U.S. General Lucius Clay on June 27. President Truman, wishing to avoid war or a humiliating retreat, supported the air campaign, against many advisors wishes.

Surviving a normally harsh German winter, the airlift carried over two million tons of supplies in 270,000 flights. C47s were used to carry coal.

The blockade of Berlin was finally lifted by the Soviets on May 12, 1949. Berlin became a symbol of the United States resolve to stand up to the Soviet threat without being forced into a direct conflict.

Does anyone believe that the Russians take George W. Bush seriously enough and that he could achieve anything of the same magnitude?

By Vladimir Soldatkin and Guy Faulconbridge

Russia was preparing to turn off gas deliveries to neighbouring Ukraine on Thursday, raising the spectre of disruptions to European Union supplies.

European states are anxious to avoid a repeat of what happened in January 2006 when, during a similar row, Moscow cut off supplies to Ukraine, causing a brief fall in gas supplies passing through Ukraine on the way to the rest of Europe.

Moscow says it will honour its contracts to supply European customers with gas, and these have enough reserves to manage without Russian supplies for days, but not weeks.

Pipelines that cross Ukraine carry about one-fifth of the EU's gas needs. A new cut-off could tarnish Russia's reputation as a reliable energy supplier and further undermine Ukraine's crisis-battered economy.