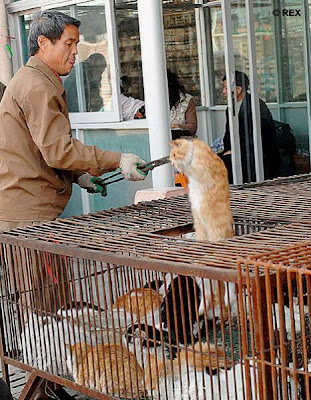 Fancy some cat for lunch?

What does eating cat and forced abortions have in common? Not much, except to focus on how different the Chinese are from us in the West. You have to go to China to see and understand the public harshness and apparent indifference to everyday cruelties. China is a tough and cruel place. That is their business, but our leaders should not delude themselves that the Chinese will ever play the game in the same way that we expect.

The Chinese act in their own interest and to their own advantage. Eating cats and forcing married woman to abort near term pregnancies is not that shocking to the Chinese. Neither is stealing technology and promoting economic policies meant to dominate and destroy competitors and industries. There are cultural differences that are profound and they will not change anytime soon. As we develop recovery plans for the future, we need to re-adjust our views and dealings with China. We need to focus our interests with people that share our values.

For decades, China has implemented a One Child policy, overturning hundreds of years of tradition which stressed the importance of large families, including several sons. It was a sign of tremendous political discipline that a mindset stretching back centuries could be overturned in just one generation.

Jin Yani and her husband Yang Zhongchen Urban families are restricted one child, rural families sometimes allowed two or for some ethnic groups, even three children. However in recent years, the policy has not been uniformly enforced. Wealthier couples who can pay the fines and penalties involved with having more than one child, do. Poorer families however don't have that option.

So in a culture that still values sons over daughters, girl infants (often the second daughters of rural families) are abandoned and adopted out of the country which allows a chance for couples to try for that much needed son. Although the slow trickle down of China's immense economic boom is slowing down the trend, China still provides thousands of babies - by far most of them girls, or handicapped children of both sexes - for the international adoption circuit every year.
The government claims that enforcing the One Child policy has been responsible for spreading the wealth, and that the country's limited resources would have had to feed 400 million more people had the policy not been implemented. Sometimes however the means justifying the end are particularly brutal.

Local family planning agencies are responsible for keeping birth quotas low, and in some places their eagerness to meet their statistics over reach the actual policy. No case illustrates this more graphically that that of Jin Yani, young, recently married and happily expecting her first child.

Just days away from her due date, she was resting in the house of her mother-in-law one evening when a van pulled up outside their door. She was dragged outside, forced into the van and taken to the local family planning centre. Even eight years later, she sobs as she recounts what happened next:
"Someone said, ‘you have to come with us, who gave you permission to have a child'. After a while we stopped at a building that looked like a hospital. Later I learned it was the family planning centre. They dragged me inside and started to examine me. They wanted to give me an injection, but I refused. I got down on my knees and pleaded with them that I wanted to be a mother and keep my child. I said I was willing to pay, 10,000 or 20,000 Yuan, but they would not listen. Then two guys dragged me into a room, the equipment looked rather old and not very good. Some people who looked like doctors came in. They held me down and gave me an injection. I passed out."
Her husband, Yang Zhongchen was away on business when his wife was taken away. On hearing what had happened, he rushed home, to find his wife in a shocking physical state:
"I could not have imagined that something like this was even possible. When I arrived at her bed side she was all blue and very weak. I said to them you have killed my baby, now don't kill my wife, do whatever it takes to keep her alive. The doctor told us that the dead baby wouldn't come out naturally. It was too big. They would have to use forceps to crush its head. Then they ripped it out of the womb by force. I don't like to think about it. Whenever I remember this, I am about to faint."

Neither of them really understand why this happened to them. Perhaps it was because they married a year short of the legal marriageable age, or perhaps they hadn't filled out the requisite paperwork to have this child. It was something that Yang thought he could do after the birth of the baby, and in fact he had even taken out the local officials to dinner in the obligatory way to grease the wheels of the local bureaucracy, but now suspects that he simply had not paid a large enough bribe. So in effect, they were put through this ordeal because of a bureaucratic technicality.
Despite the one child policy, forced abortions are illegal in China, but there have been reported - and then hushed up - cases in scattered rural areas. Stories have emerged of women being physically forced to abort very late term pregnancies, of relatives of pregnant women being imprisoned and tortured until she accedes to an abortion. Activists who try to bring the subject to light are harassed or jailed and people are reluctant to discuss a subject that is close to taboo.

Jin Yani and Yang Zhongchen are unusual in that they decided to fight the authorities, to get them to answer for what they did. They have lost their business and their life savings in the monumental effort to take the local officials to court, but as yet, they have been offered neither compensation, nor apology. Their hopes of having a baby dim with every passing year, and they suspect that too much damage has been done to Jin Yani's body by the forced abortion for her to be able to conceive again. Yang Zhongchen sums up the many sided grief he and his wife must live with, perhaps for the rest of their lives:
"They took our family life. Look at us: We don't have a child, my wife is sick, we are no longer a normal family. And we didn't get justice..., no matter what the future holds for us, the shadows of the past can never be erased."