‘Not a dickie-bird!’ Farage SKEWERS Juncker over deafening silence on Catalonia violence

Up to 700,000 people have taken to the streets of Barcelona in the wake of Sunday’s controversial Catalonia independence referendum, municipal police announced. Huge crowds rallied Tuesday against the violent crackdown on voters by Spanish police.

Roads and traffic was blocked throughout the city on Tuesday, as protesters marched, chanting, “Independence!” and “The streets will always be ours!”
Some 700,000 people took to the streets, Barcelona municipal police announced on Twitter.

Thousands gathered outside the offices of Spanish Prime Minister Mariano Rajoy’s People’s Party (PP) in Barcelona and the Catalonia regional HQ of the national police as police stood guard. Protesters shouted slogans and waved the red-and-yellow Catalan flag, and groups of firemen played bagpipes outside the PP’s office as the crowd cheered them on.


RT’s Madina Kochenova and Anastasia Churkina dived into the rally at Barcelona’s central square, reporting live from the protest on Tuesday.
Youngsters and elderly people, families with small children were among a bustling crowd of jubilant demonstrators that filled the square in protest against the Spanish government’s crackdown.


“They are asking, they are shouting at national police forces to leave the region of Catalonia,” Kochenova reported from the protest in the afternoon.

As darkness fell, people showed no sign of calming down, Churkina reported.
“Looks like it’s going to continue through the evening through the guise of people not only protesting the policy brutality but also that Catalonia has seen during the referendum but also the general actions of Madrid,” the correspondent said.
A young female protester echoed the general mood as she told Churkina the actions of Madrid would not be tolerated by the locals anymore.

“We will not accept anything like this anymore. We’re heartbroken. We just wanted to use our right to vote. We think it’s not normal how the government behaved,” the protester said.

READ MORE: What would happen to FC Barcelona if Catalonia split from Spain? 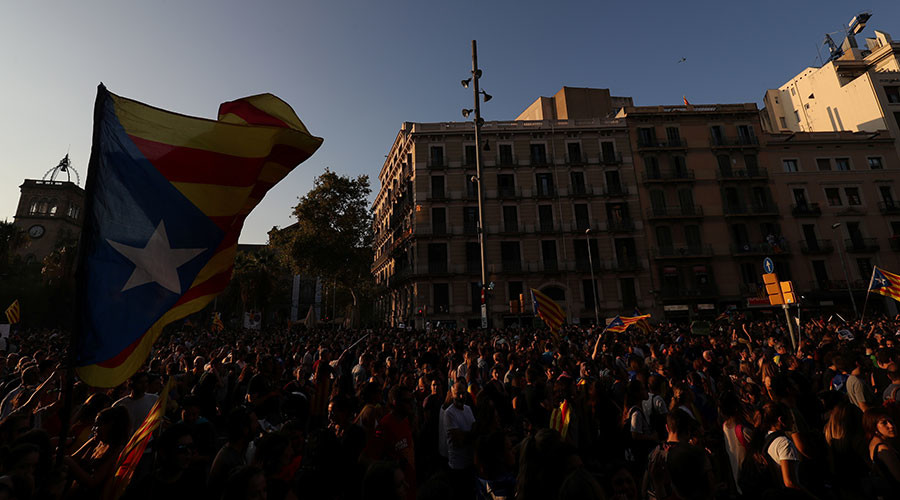 A protest strike was also called by major trade unions as government workers walked out and businesses and universities shut for the day. Metro stations were empty as services were drastically cut back, while the usually busy Boqueria market was deserted. Famous tourist attractions such as the Sagrada Familia church were also shut down.

Even FC Barcelona took part, canceling all its training sessions for the day. However, the main unions, the CCOO and UGT, avoided calling the walkout a general strike, instead called it a “temporary work stoppage” to get around laws that prohibit striking for political reasons. 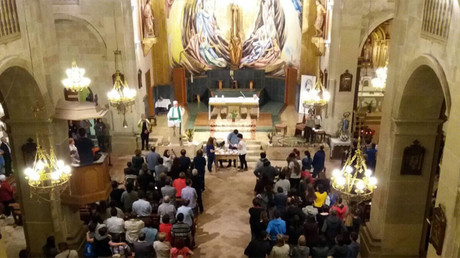 Catalan activists escape Spanish crackdown by counting votes at church altar (VIDEOS)
The Spanish government has condemned the protests as an affront to the rule of law.

“I’ve seen how President Puigdemont has flooded the streets with his followers to stop people obeying the law and to make them disrespect justice,” said Rajoy’s deputy prime minister, Soraya Saenz de Santamaria. “We are here to defend the rights and liberties of all Spaniards that have been trampled upon by the regional government.”

The Spanish government and the country’s Constitutional Court have declared the Catalonia referendum illegal, and dispatched thousands of officers from the National Police and the Civil Guard to prevent the vote taking place. In the ensuring operation, nearly 900 people were wounded as officers deployed batons and rubber bullets to break up crowds of voters.

Despite this, millions of Catalans still turned up to cast their ballots. Of those who managed to vote, the Catalan authorities claim, 90 percent voted for independence. Catalan President Carles Puigdemont has said he will take steps to start separating from Spain, and has appealed for international mediation with the central government.
Posted by Deuce ☂ at 10/04/2017 04:11:00 AM