We Have a Problem 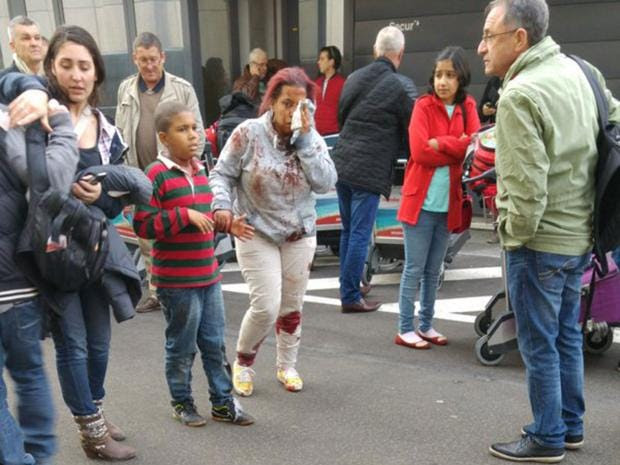 Up to 10 people are feared dead and many wounded after large explosions at Brussels Airport and at a Metro station in the Belgian capital.
Witnesses said the airport blasts happened shortly before 8am local time (7am GMT) in the departure hall near the check-in desks for American Airlines and Brussels Airlines.

Little over an hour later, another explosion was reported at the Maalbeek (Maelbeek) station, near the European Council headquarters and other EU buildings. The capital's Metro system was being shut down.

The explosion reportedly took place in the Departures lounge, beyond airport security areas.

The Belga news agency reported that shots were fired before the explosions and shouting was heard in Arabic.

A Sky News journalist who was checking in at the time said he heard two very large explosions before being moved away from the area and that speculation of a terror attack was spreading.

An American couple, Andrew and Denise Brandt, said they felt the blast “like a wave" as they shopped on the other side of security barriers, before hundreds of people started running towards them.

The airport, which was being exacuated, has been closed to all departures and arrivals as investigations continue. Rail services have been suspended.

The cause of the reported blasts has not been confirmed and police could not immediately be reached for a comment.

A spokesperson for Brussels Airport said: "There have been two explosions at the airport. Building is being evacuated. Don’t come to the airport area.

"All airport operations have been suspended until further notice.Passengers that are still located in other area’s in the airport are asked to remain calm and wait for further information."

The Belgian interior minister, Jan Jambon, said the national terror alert would be raised to its maximum level in the wake of the explosions, suggesting that authorities believe they were an attack.

Charles Michel, the Prime Minister, said the government was following the situation "minute by the minute" and that victims and bystanders at the airport were the priority.

"American Airlines flight 751 (from Brussels to Philadelphia) has been cancelled for today. When operations at the airport resume, we will re-accommodate our customers.”

Brussles has been under increased security measures since November's Paris attacks and has seen several operations in recent weeks linked to the hunt for Salah Abdeslam, who was caught on Friday.
Posted by Deuce ☂ at 3/22/2016 05:00:00 AM