Groundhog Day: the perfect comedy, for ever 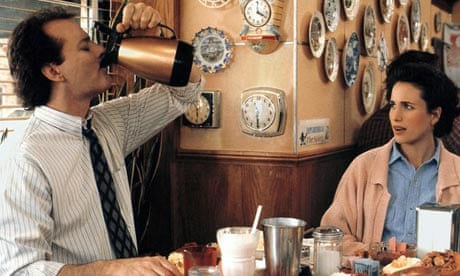 I am holding for David O Russell, the Oscar-nominated director of Silver Linings Playbook and The Fighter, who has agreed to talk about one of his all-time favourite films: the comic masterpiece Groundhog Day, released in the US 20 years ago this month. (It reached the UK in May 1993.) But the person on the other end of the line doesn't sound like Russell: it's more of a shrill whine, the vocal equivalent of nails on a blackboard. Then the penny drops.

"Ryan? It's Ned! Ned Ryerson! Bing!" After a prolonged chuckle, Russell drops his impersonation of Groundhog Day's irksome insurance salesman, a minor but intensely memorable character, and explains excitedly that he recently met Andie MacDowell, one of the film's stars. "She came to a screening of Silver Linings Playbook and I was, like: 'Oh my God, you were in one of the greatest motion pictures of all time.' She goes: 'Four Weddings and a Funeral?' I said, 'No, Groundhog Day!' I would give my left arm to have written that fucking script. It's the only movie I think of from that period other than the ones by Quentin [Tarantino]. It makes me mad because I would so like to make a film like that. Oh man, I could go on for ever about that movie …”


We don't have for ever – isn't that one of the lessons of Groundhog Day? – but Russell happily slips in and out of voices and lines from the movie, his recollections punctuated by wistful sighs. This is what tends to happen when fans of Groundhog Day get together. On its release, the picture, directed by Harold Ramis, instantly took its place alongside long-cherished favourites such as It's a Wonderful Life and Some Like It Hot. It was a hit, if not a record-breaking one – Free Willy made more money that year. It wasn't even the biggest comedy of 1993: that honour went to the Robin Williams cross-dressing farce Mrs Doubtfire, which grossed more than three times as much in the US. But if one of the marks of a great film is that we can barely remember a time when it wasn't in our lives, then Groundhog Day passes that test with ease. It seems to have been with us for ever.

So, too, does its title, which has entered our language as shorthand for any period of intolerable monotony comparable to the one experienced by the misanthropic TV weatherman Phil Connors (Bill Murray). Phil is dispatched to the folksy town of Punxsutawney, Pennsylvania, to cover the annual 2 February celebrations, which revolve around a groundhog supposedly foreseeing the exact date of the arrival of spring. "This is one occasion where television really fails to capture the true excitement of a large squirrel predicting the weather," Phil sneers to camera. But when he wakes the following morning, it is 2 February again. And 2 February it will remain indefinitely, rebooted each day at 6am, until Phil can figure out how to arrest the cycle. The secret, it transpires, lies within him.


The film's timelessness can be attributed partly to its classical redemptive narrative, which has echoes of A Christmas Carol. "The redemption plot is one of the oldest story shapes," says Peter Baynham, the Day Today and Brass Eye writer whose script credits include Borat, Arthur Christmas and the forthcoming Alan Partridge: The Movie. "With so many movies, especially comedies, you can see the bones sticking out – you can see what they're trying to do. But Groundhog Day is such a clever, wonderful ride that you don't notice the joins. It's rare for a comedy to be funny and profound but also popular. Films such as Groundhog Day and Back to the Futuresold a lot of popcorn, but they were insanely smart too. That's very inspiring when you're sitting there trying to write a comedy screenplay. Groundhog Day is living proof that it’s possible to create intelligent comedy that still has a broad appeal."

Also remarkable is the film's refusal to reveal how Phil came to be stuck in his time-loop: there is no magical fairground machine (Big), no mantra (Shallow Hal), no curse (What Women Want). Nor does it specify the amount of times he repeats the same day. It could be 10 years or a thousand, however long it takes him to memorise the personal histories of Punxsutawney's townsfolk, and to become, among other things, a pianist, an ice-sculptor and a doctor ("It's kind of an honorary title," he shrugs). That radical withholding of information makes it something of an art film in mainstream clothing.

The artist and film-maker Gillian Wearing included Groundhog Day in her all-time top 10 when polled last year by Sight & Sound magazine. Her list included other enigmatic, if less multiplex-friendly, films – L'avventura, The Exterminating Angel, Last Year at Marienbad. "All those films reinvent structure and create a new conceptual framework that makes you understand them," says Wearing. "They share an almost surrealistic vision, and they pose philosophical questions. Groundhog Day is there primarily to entertain, but there are lots of really intelligent ideas in it. It makes me think of [the French philosopher Gilles] Deleuze and his thoughts on how change can arise from repetition. The film follows that to the letter.”

Not that the studio pushed the screenwriter Danny Rubin to go big on Deleuze or to make the third act more Marienbad-ish. On the contrary, Rubin was urged to write a Gypsy-curse scene explaining the loop, which Ramis wisely never shot. The mystery has only fortified the film's magic. Its chances of longevity were helped too by a purge on period references. Rubin urged Ramis, with whom he shares a writing credit, to expunge any nods to the 1990s: "You've gotta take all this out," he said, "because this movie is really going to go on for years and years." Compare this with Judd Apatow's films, which are peppered with gags about early-21st century celebrity culture. Parts of Funny People and This Is 40 will be incomprehensible in 50 years' time, whereas our descendants in 2063 will have no trouble understanding Groundhog Day when they download it on to their frontal lobes.

Speak to any of the film's admirers and one word comes up repeatedly: perfect. "I thought straight away that it was a classic," says Wearing. "It's like a Billy Wilder film: other generations will understand immediately what's so good about it. To me, it’s a perfect film."

Russell agrees: "It's perfect in its structure, and its ideas are so profound. Very much like Silver Linings Playbook, it's about someone fighting their demons using all that humble, difficult, baby-steps hard work that it takes, but doing it in such a hilarious way. It shows that until you wake up and get things right, you're gonna live that stuff until you die: the same emotional prison every day. Phil has to go through every incarnation of what he thinks love is until he really gets it.”

Like Russell and Wearing, the former Monty Python member Terry Jones also included Groundhog Day in his top 10. "What's so remarkable about it," Jones observes over a pint in a north London pub, "is that normally when you're writing a screenplay you try to avoid repetition. And that's the whole thing here, it's built on repetition. That's so bold. The way they get through it is to short-circuit everything, so just when you think something is going to happen that you've seen before, the film gets to it before you and changes or abbreviates it in some way. I saw it when it came out and it just took my breath away."

It still does. I watched the film again at a London cinema last weekend (on Groundhog Day itself, in fact), where it played to a rapturous sold-out crowd who hung on Murray's every poisonous putdown. ("Probably the best work that I've done," Murray once said of the movie.) His performances since then, from his collaborations with Wes Anderson (including last year's Moonrise Kingdom) to his Oscar-nominated turn in Sofia Coppola's Lost in Translation, each have as their springboard Groundhog Day. Before that, Murray was seen largely as a clown. After it, he was a complex actor with range. "It's the movie he was born to make," enthuses Russell. "It's his greatest role. His cynicism and eventually his sincerity feel so real because he comes by them so honestly. He proves that if you feel it from the feet up, there are no cliches.”

If the impact of Groundhog Day is still felt on Murray's career, its influence on cinema in general is ever more prevalent. It legitimised fantasy aspects in mainstream comedy so effectively that stars such as Jim Carrey (in The Truman Show, Liar Liar and Bruce Almighty) and Adam Sandler (in Click and 50 First Dates) spent years trying to replicate its formula. Its imprint can be detected on films as diverse as Sliding Doors, The Family Man, Run Lola Run and the recent Safety Not Guaranteed. In 2004, there was an Italian remake, though the best thing about that was the title: È già ieri, or It's Already Yesterday. And Charlie Kaufman has also occupied the same philosophical terrain with films such as Being John Malkovich and Eternal Sunshine of the Spotless Mind (with Carrey again). "Look at everything Kaufman's done," says Russell, "and you'll see that Harold and Danny got there first." Later this year, Richard Curtis will try for the Groundhog Day effect with About Time, featuring a hero who can zip back and forth through episodes in his own life. In one sequence, he refines repeatedly his first night with a new girlfriend until he perfects his technique. Connors, never shy of using supernatural subterfuge for sex, would have approved.

"There have been a lot of messing-with-time movies where you can't help but see the influence of Groundhog Day," Rubin tells me. "There was Source Code, which was like Groundhog Day but with a bomb on a train. I quite liked that. Every time it happens, my friends say: 'You just got ripped off. I hope they paid you.' I'm, like: 'No, it's an homage.' It's not like I'm being erased. It's an honour. I always thought the premise could be explored a million different ways. I welcome all of these explorations; it's fun for me because I like to see how other people play with the idea. Basically it shows how ubiquitous it's become in the culture. It’s getting harder and harder now to find anyone who hasn't seen it."