“(The reason for the accident) could only have been a mechanical impact on the plane,” Alexander Smirnov, Metrojet's deputy director

Kim Hjelmgaard, USA TODAY 9:42 a.m. EST November 2, 2015
The Russian airliner is ruling out technical problems and human error in the crash that took 224 lives in Egypt. 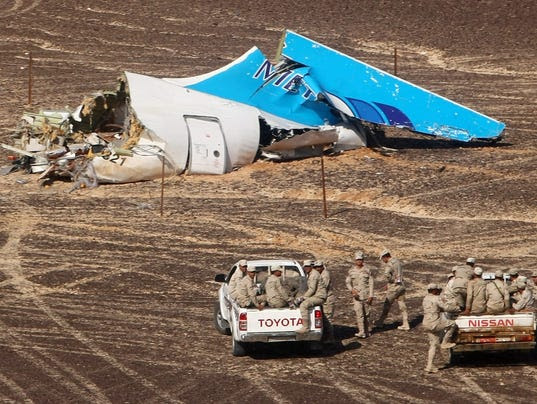 (Photo: Russian Emergency Ministry via EPA)
A Metrojet official on Monday said neither a mechanical failure nor human error could have caused the crash of its passenger plane in Egypt over the weekend that killed all 224 people on board, all but five Russian nationals.
“(The reason for the accident) could only have been a mechanical impact on the plane,” , Metrojet's deputy director said in Moscow. He said that a technical problem would not have caused the  to break up in the air and that only an "external impact" were to blame.
"We (are) excluding technical problems and rejecting human error," Smirnov said.
Kremlin spokesman Dmitry Peskov stressed that it remained too early in the investigation to draw any conclusions.
“It would be wrong to articulate any preliminary guesses or voice statements that are not based on anything,” Dmitry Peskov told Russia's RT news and other outlets Monday. “At least let the investigators produce some results first.”
James Clapper, the U.S. director of national intelligence, said in Washington said a claim of responsibility from an Islamic extremist group could not be ruled out. But Clapper added that so far no physical proof of terrorism involvement had been revealed.
Investigators are focusing their probe on the theory that the plane broke up in the air, citing a debris field that stretches over 6 square miles in the .
Metrojet said Monday that a previous problem with the plane's tail was fully repaired.
The  appeared to quickly rule out terrorism after the plane crashed after taking off from  for St. Petersburg early Saturday.
An Islamic State affiliate operating in the Sinai peninsula where the incident took place nevertheless claimed responsibility. Russian investigators have also dismissed that claim.
Contributing: John Bacon
Posted by Deuce ☂ at 11/02/2015 09:54:00 AM