Just one attack away from the abyss: America is on the brink of a revived politics of fear

If the response to the Paris atrocity is a guide, then a return to the post-9/11 Bush years is closer than we think SALON 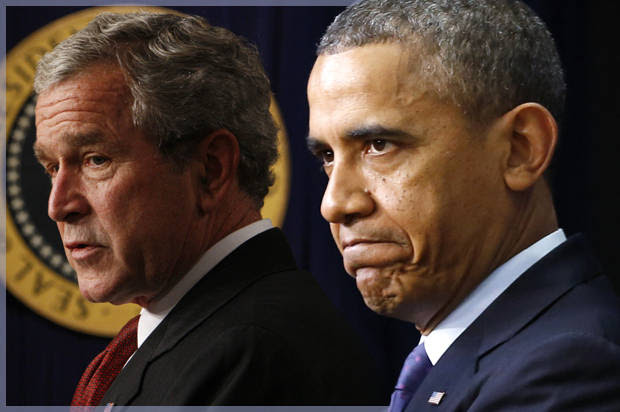 (Credit: AP/Charles Dharapak/Reuters/Kevin Lamarque/Photo montage by Salon)
A few weeks ago, I spoke with the New York Times’ Charlie Savage about “Power Wars,” his new book on the Obama administration’s counterterrorism policies. Savage’s book is long and dense (in a good way), but rather than try to encompass its whole narrative in our relatively brief conversation, I focused instead on the Christmas Day attack of 2009. And if that strikes you as odd, just take a gander at how American politics has responded to the atrocities perpetrated against innocent civilians in Paris last week.
But before we turn to Paris, let’s talk about Umar Farouk Abdulmutallab’s unsuccessful attack first. Aside from introducing the phrase “underwear bomber” into our lexicon, that near-miss disaster’s influence on our culture has been negligible. But according to Savage, that attempted mass murder, despite its ultimate failure, was like “Obama’s 9/11.” From that day on, his approach to the policies that make up the “war on terror” — surveillance, military commissions, drone strikes, etc. — would never be the same.
One reason why has to do with the attack itself. More specifically, it has to do with the fact that Abdulmutallab’s failure, according to Savage’s reporting, was entirely his own. He wasn’t thwarted because of anything having to do with U.S. policy; he simply got unlucky (thank God). If “Rick & Morty” is correct, and there is an infinite number of alternative universes out there — well, in most of them, Obama’s first Christmas as president features the worst terrorist attack on U.S. soil since 9/11.
The other reason why the underwear bomber has had such an outsize influence on the present administration has to do with the way the news was greeted by Obama’s political foes. His attempts to reform some of Bush’s practices were being stymied already; and many in the administration worried about time and energy being drained from other priorities, like the Affordable Care Act or Dodd-Frank. The underwear bomber made everything worse, and tipped the administration’s internal balance of power in the skeptics’ favor.
Here’s how Savage put it to me during our chat:

Republican critiques that [Obama] was dismantling some of the things that Bush had put into place suddenly got a lot sharper; and the sense was, if there was another attack, and if it succeeded, the blood would be on his hands … So inside the Obama administration, [it came to be believed that if] there is another attack, and it actually succeeds, Obama [would] be a failed, one-term president … [E]verything he came in there to do, including things that [had] nothing to do with national security, would fail.

There’s no doubt that civil libertarians and other critics of the national security state will find that justification severely lacking. Although we all know it’s true, no one wants to admit (or accept) that political expediency usually trumps fundamental rights. But it’s worth looking back on the episode from today’s vantage, especially in the wake of the terrorist attack in Paris. Because Obama realized something in 2009 that is just as relevant today. And it’s something I think many progressives have forgotten.
Despite all the death and suffering, despite our promises to never again make the same mistakes, American politics is still just one step removed from the abyss. One successful terrorist attack on U.S. soil; that’s it. That’s how close we are to a return of the toxicity that poisoned this country in the years after 9/11. That’s how close we are to the dark days of 2002, when our politics was characterized by a nightmarish combination of hysteria and belligerence.
If you don’t believe me, I think this list of recent stories can give you a good sense of the way America’s responded so far to the massacre in Paris.
Jeb Bush, who supposedly represents the sensible adults within the Republican Party, is reiterating his call to discriminate against refugees on the basis of religion. Meanwhile, the party’s 2016 front-runner, Donald Trump, is vowing to “strongly consider” shuttering some American mosques if he becomes president. The governors of Alabama, Arkansas, Illinois, Indiana, Louisiana, Massachusetts, Michigan, Mississippi and Texas have all vowed not to accept Syrian refugees. And in Congress, a powerful GOP senator wants to shut down the government for the same reason.
In other words, the norm against explicitly discriminating against Muslims — which was admittedly always rather weak — has been essentially abandoned. Remember how George W. Bush would insist, repeatedly, that Islam was “a religion of peace”? Those days are gone. When it comes to Muslims, the GOP has discarded any pretense of opposing a war of religion. The Lindsey Grahams of the world, who want the U.S. to lead a “religious war,” have won. Easily.
If you’re hoping that the media will perform more admirably now than it did in the years after 9/11, when jingoist groupthink nearly became a requirement for inclusion in the mainstream? Sorry, but the news isn’t better there, either. The New York Observer, for example, recently published an Op-Ed recommending France consider “harsher measures,” like “the internment of potential jihadists”; elite journalists, such as Politico’s Ben White, are sounding like they did in the run-up to Iraq. A leading reporter for CNN is demanding the president explain why he won’t just “take out these bastards.”
The racism, the bigotry, the fear-mongering, the fantasies of redemption through violence — anyone who lived through the immediate post-9/11 period remembers it all too well. They remember how this willful embrace of militarism, suspicion, tribalism and fear led to unprecedented human rights abuses — at home and abroad — as well as a war that cost trillions of dollars, hundreds of thousands of lives, and accomplished nothing beyond replacing Saddam Hussein’s evil with one that, impossible as it seems, is somehow even worse.
Keep in mind: This was all in response to an attack in Paris, the capital of a country most Americans have never visited — which, as recently as last week, was nothing more than a means to get a cheap laugh from conservative audiences. I shudder to imagine what the reaction would be like if what happened in Paris had taken place in Los Angeles, New York or Dallas instead. Obama is routinely described as a treasonous crypto-Muslim as it is already; if an attack happened on his watch, impeachment proceedings would begin within weeks.
Now, whether Obama’s response to the Christmas Day attack of 2009 was right — both morally and in terms of policy — is a profoundly difficult question. And it’s one about which reasonable, intelligent and civic-minded people can differ. But to anyone who didn’t know it already, America’s response to the heinous violence in Paris should leave no doubt: We have not outgrown the war on terror, not remotely. We are just one attack away from being pulled back into that void once again.