Forgot How a Star Is Formed? 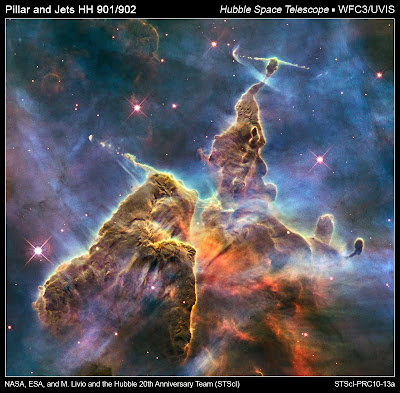 Click Photo to Enlarge and View in Awe!
The new image, captured earlier this year by Hubble's brand-new Wide Field Camera 3, shows a cosmic pillar of gas and dust piled high in the Carina Nebula.

Located about 7,500 light-years away in the southern constellation Carina, it shows a craggy mountaintop that is enshrouded by wispy clouds which would not look out of place in JRR Tolkien's epic fantasy or even a Dr Seuss book.

It captures in amazing detail the chaotic activity atop a three-light-year-tall pillar of gas and dust that is being eaten away by the brilliant light from nearby bright stars.

Nasa scientists say the scorching radiation and streams of charged particles from super-hot newborn stars shape and compress the pillar, which in turn causes more new stars to form within it.

They say the colours in the image reflect the glow of oxygen (blue), hydrogen and nitrogen (green), and sulphur (red).

How a Star Is Formed

A star is formed out of cloud of cool, dense molecular gas. In order for it to become a potential star, the cloud needs to collapse and increase in density.

There are two common ways this can happen: it can either collide with another dense molecular cloud or it can be near enough to encounter the pressure caused by a giant supernova. Several stars can be born at once with the collision of two galaxies. In both cases, heat is needed to fuel this reaction, which comes from the mutual gravity pulling all the material inward.

What happens next is dependent upon the size of the newborn star; called a protostar. Small protostars will never have enough energy to become anything but a brown dwarf (think of a really massive Jupiter). A brown dwarf is sub-stellar object that cannot maintain high enough temperatures to perpetuate hydrogen fusion to helium. Some brown dwarfs can technically be called stars depending upon their chemical composition, but the end result is the same; it will cool slowly over billions of years to become the background temperature of the universe.

Medium to large protostars can take one of two paths depending upon their size: if they are smaller than the sun, they undergo a proton-proton chain reaction to convert hydrogen to helium. If they are larger than the sun, they undergo a carbon-nitrogen-oxygen cycle to convert hydrogen to helium. The difference is the amount of heat involved. The CNO cycle happens at a much, much higher temperature than the p-p chain cycle.
Whatever the route – a new star has formed.

The life cycle of a star is dependent upon how quickly it consumes hydrogen. For example, small, red dwarf stars can last hundreds of billions of years, while large supergiants can consume most of their hydrogen with a comparably short few million years. Once the star has consumed most of its hydrogen, it has reached its mature state. This is how a star forms.