Obama in an Islamic Wonderland.

We all enjoy fairy tales. Some of us are good at telling them. Enjoying a fairy tale from a clever teller of them is a big leap to believing in them. Seriously, Will anyone buy this toffee?

Obama's Challenge to the Muslim World

The historic significance of President Obama's speech to the Muslim world in Cairo cannot be overstated. Never before has an American president spoken to the global Muslim community. His speech marked a major shift in American foreign policy. Obama directly enlisted a religion to build global peace and to resolve the Palestinian-Israeli conflict, end nuclear proliferation and stop terrorism.

In just a few sentences he demolished the phony theory of the "Clash of Civilizations," which insists that Islam and the West must always be in conflict. Instead, he declared the United States is not at war with Islam and outlined a plan for how the conflict can be resolved.

Perhaps most important, he put religion at the core of the peacemaking process. For too long, Americans had come to fear Islam as an intolerant, violent religion. Obama cited examples from the Quran that belied those stereotypes. He emphasized the core similarities among Judaism, Christianity and Islam.

"Islam is not part of the problem in combating violent extremism," he said. "It is an important part of promoting peace."

To Muslims, that was a powerful statement. "Islam is the solution" is the mantra of many Muslims. They believe their religion can and does solve problems. Now they have the leader of the most powerful nation on earth agreeing with them and seeking their help. He is challenging them to live up to Islam's ideals, just as he insisted that the United States must live up to its own ideals.

He captured the attention of Muslims because, unlike most politicians, he was willing to critique both his own country and Muslims where they fell short of their ideals.

The question now is whether Muslim governments and warring factions can embrace the true meaning of Islam.

For each of the problems Obama cited -- American occupation in Iraq, the Israeli-Palestinian conflict, the spread of nuclear weapons, development of democracy, religious freedom, women's rights and economic development -- Islam presents a solution.

Islam denounces suicide of any sort, especially suicide bombings that kill innocents. Even in a defensive war sanctioned by Islamic law, suicide is expressly forbidden.

As Obama pointed out, the Holy Quran says that whoever kills an innocent, it is as if he has killed all mankind. Adherence to Islam would end indiscriminate firing of missiles from Gaza into Israel that kill innocents.
Islam certainly opposes Muslims killing Muslims, which has been the staple of the dispute between Iraqi Sunnis and Shias as well as in Pakistan and Darfur.

After the 9/11 terrorist attacks, Islamic jurists ruled that under Islamic law those type of attacks did not fall under the norms of a just war.

Even top clerics and government officials in the Islamic Republic of Iran concede that Islam prohibits nuclear weapons because they kill indiscriminately.

Islam supports democracy with government run by consent of the people. A Shariah-compliant state owes its existence to the will of the people and is subject to control by them. The Prophet Muhammad himself said, "The hand of God is on the majority."

Religious freedom is at the core of Islam. The Quran expressly and unambiguously prohibits the coercion of faith because that violates a fundamental human right - the right to a free conscience. The Quran says in one place "There shall be no compulsion in religion." And in another it says, "To you your beliefs and to me, mine."

The Prophet Muhammad has been known as the first feminist. "The best of you are those who are best to their women," he said. Gender equality is an intrinsic part of Islamic belief. The Qur'an makes no difference in the religious obligations of men and women and set the stage for women's rights. Many of the limits placed on women in Muslim societies are due to local custom more than to Islamic teaching.

If using these Islamic principles, peace can be found in the region, Palestinians and Israelis can find accommodation, and Muslims can stop killing Muslims in Darfur, Iraq, Afghanistan and Pakistan, then the economic aid Obama promised can lead to a flourishing economy. Dubai and Kuala Lumpur have shown us the way.

By embracing Islam in the peacemaking process, Obama has laid down a challenge to Muslims. Live up to the tenets of our religion, embrace Shariah law as conceived by the Prophet, and see what happens.

Imam Feisal Abdul Rauf is chairman of the Cordoba Initiative, an independent, non-partisan and multi-national project that seeks to use religion to improve Muslim-West relations. (www.cordobainitiative.org) He is the author of "What's Right with Islam is What's Right With America." 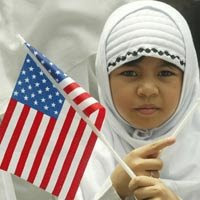