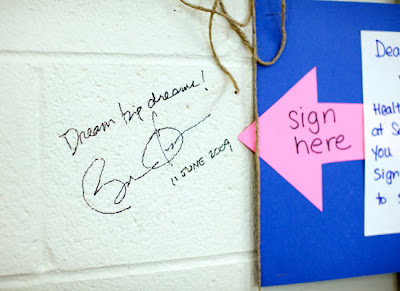 Some guy over at American Thinker is trying to make an issue out of the date sequence used by Obama, pointing out that it is like the European system. I use the same system, and I think it makes more sense, but not because it makes me feel European. I used it for seven years in the military. It is on my DD-214. Out of curiosity, does the military still use that system?

I was browsing through some White House photos published online, and saw one of where President Obama signed a wall in a high school. The interesting part of the signing was not the note he wrote, but rather the way he wrote his date. Instead of putting June 11, 2009, he put 11 June 2009, which is how Europeans, not Americans, write their dates.