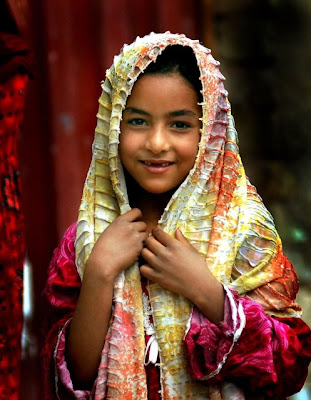 "The constitution ( of Iraq) says that Islamic Sharia law is the guiding legal principle. In practice, this means that women are losing many of their social privileges. It has, for example, become legal for an adult man to marry a nine-year-old girl, something that used to happen only in secret among local tribes.
The Women of Iraq
BY NICOLIEN DEN BOER*
30-08-2007
Radio Netherlands

For a long time, Iraqi women were among the most modern in the Middle East: highly educated, often working outside the home and dressed according to the latest fashion. Four years after the fall of Saddam Hussein, they have lost most of their liberties, and both Muslim and Christian women risk their lives just walking the streets without a veil.
After the US-led invasion, President George W Bush and his wife Laura emphasised that the lives of Iraqi women would improve. No more torture and executions of political activists and dissenters, no more palaces of horrors where Saddam's son Uday held and raped young virgins.

Losing ground
But women's rights activist and aid worker Yannar Mohammed says that in reality Iraqi women are losing more ground every day. She does not want to trivialise Saddam Hussein's atrocities, but argues that Iraqi women have far less rights today than they did under the former dictator. Not just because of the permanent threat of shootings, bomb attacks, kidnappings or rape, but mainly as the result of al-Qaeda and other Islamist groups taking control of most of urban Iraq. Speaking on the phone from Iraq, Yannar Mohammed says women are forced to live 'in a black box'.
"Women are no longer allowed to wear the modern clothes that they used to wear in the eighties and nineties. First they were forced to put on the veil, and then their dresses had to become longer. And especially in the last months of this year in many suburbs a woman is not allowed to show any skin anymore. She has to wear thick stockings, sometimes two layers and gloves."
Under Saddam Hussein, too, there were women who chose to wear headscarves, but abayas (long black dresses) or face-covering niqabs were rare. Women were highly educated and held all kinds of jobs, including posts as teachers, doctors and politicians.

Extremist intimidation
As early as 2003, shortly after the US invasion, UN aid workers warned about religious extremists intimidating women and girls and forcing them to wear headscarves. The UN aid workers said that radical Sunni and Shi'ite factions were taking advantage of the instability created by the invasion. In addition, the organisation reported an increase in the number of rapes in Iraq. A report from the Dutch foreign ministry in 2004 states: "Reports from the south, Baghdad and Mosul indicate increasing pressure on women to wear the veil."
Local NGOs and Amnesty International report that acts against women are becoming more aggressive with each passing year. Islamist militias regularly distribute leaflets warning women to stay at home 'where good women belong'. Television viewers are bombarded with dozens of Islamist satellite channels. In their programming, all women wear veils and praise is lavished on stay-at-home mothers with numerous children.

Verbal abuse and worse
Students attending university are verbally abused as they enter the gates and Islamist groups are putting pressure on the universities to create at least separate lecture halls for female students. Women who drive a car or work as a doctor, journalist, activist, aid worker or lawyer receive death threats over the phone, via e-mail and on the streets. If they insist on practising their profession or refuse to go home to change their clothes they will be subject to verbal abuse if they are lucky, but more and more often they are beaten up or shot dead in the street.
However, Iraqi member of parliament Maysoon al-Damluji points out that the 2005 constitution actually gave women more rights:
"For instance in the case of travel, a woman had to have a father, a parent a husband to travel with her. This no longer exists; a woman can travel freely without a guardian. Theoretically it is better but in practice not."

Sham
She also points to the fact that 25 percent of the country's MPs are women. But women's rights activists like Yannar Mohammed - who earlier this year won the prestigious Eleanor Roosevelt Global Women's Right Award - say that the large number of woman MPs is a sham. Local aid organisations and Amnesty International agree.

These organisations are also highly critical of the new constitution and the predominantly Islamic government which reportedly does little for women. The constitution says that Islamic Sharia law is the guiding legal principle. In practice, this means that women are losing many of their social privileges. It has, for example, become legal for an adult man to marry a nine-year-old girl, something that used to happen only in secret among local tribes.