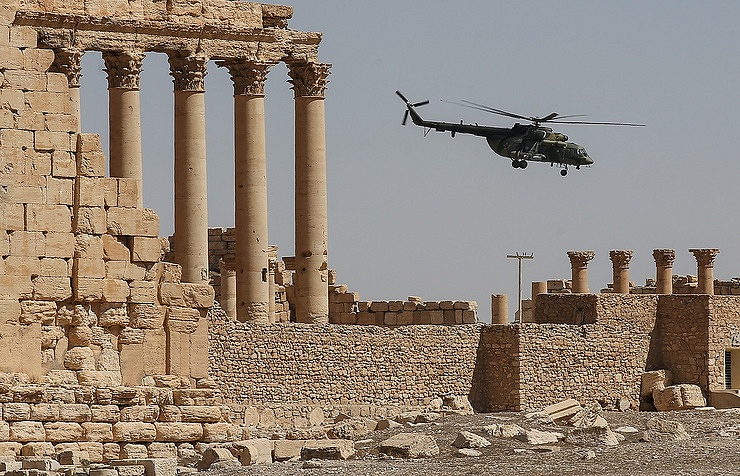 MOSCOW, March 2. /TASS/. The liberation of Palmyra is a very important event, which not only boosts the Syrian army’s morale but also opens up new opportunities for the final defeat of terrorists, members of Russia’s Federation Council (upper house of parliament) told TASS.

On Thursday, the Syrian army regained full control of the city of Pamyra and its suburbs after a series of successful operations carried out with massive support by the Syrian Air Force and the Russian Aerospace Forces. Gunmen of the Islamic State group captured Palmyra in May 2015. At the end of March 2016 the city was recaptured, but in December Palmyra was again in the hands of extremists.
Head of the Federation Council Defense and Security Committee, Viktor Ozerov, noted that "the capture any landmark city boosts the morale of the Syrian army, the Syrian people and gives strength to continue operations in others parts of Syria to eliminate terrorists and create conditions for political dialogue and transition to civilian life." He noted, however, that Palmyra’s example should teach the Syrian authorities that liberating the city is one thing, and preventing it from being recaptured is another thing. "I believe the Syrian army has learned this lesson." Ozerov added that the success in Palmyra would have been impossible without close cooperation between the Syrian army and the Russian Aerospace Forces.

For his part, First Deputy Chairman of the Federation Council International Affairs Committee, Vladimir Jabarov, noted that the capture of Palmyra is a strategic victory won with the help of the Russian Aerospace Forces.
"The liberation of Palmyra is a very important event. However, the most important thing now is not to rest on one’s laurels. The terrorist hydra cannot be allowed to move to another place," the senator said.
According to Jabarov, the successful operations in Syria and in Iraq’s Mosul indicate the beginning of the collapse of the terrorist system. "The impression is that the collapse of the system built by militants in Syria and Iraq has begun. Palmyra has been liberated, the successful operation of Iraqi troops in Mosul is underway. Even the leaders of the ISIL (former name of the Islamic State group outlawed in Russia - TASS) admit that the militants are losing the war," the parliamentarian noted.

Despite the success, the Syrian army must remain vigilant, says Franz Klintsevich, First Deputy Chairman of the Federation Council Defense and Security Committee. "In my opinion, there should be no chest-thumping mood. Otherwise, Palmyra could be lost again," he said, adding that Russian instructors will begin the relevant work in the Syrian army when the city is cleared of militants.
Klintsevich also noted that the United States and its allies will not share information on militants’ movement, while the Russian Aerospace Forces "are performing other tasks in Syria." "That means one should rely, first and foremost, on the relevant services of the Syrian troops, which have accumulated certain experience. In a word, one should stay alert."
Posted by Deuce ☂ at 3/03/2017 05:51:00 AM