Not buying it. Remember the Slam Dunkers? When I first heard this report had a "high confidence" attached to it, my immediate sense was of the warm whiff of bullshit.

This post will unpack the leak from the CIA published in the WaPo tonight.
Before I start with the substance of the story, consider this background. First, if Trump comes into office on the current trajectory, the US will let Russia help Bashar al-Assad stay in power, thwarting a 4-year effort on the part of the Saudis to remove him from power. It will also restructure the hierarchy of horrible human rights abusing allies the US has, with the Saudis losing out to other human rights abusers, potentially up to and including that other petrostate, Russia. It will also install a ton of people with ties to the US oil industry in the cabinet, meaning the US will effectively subsidize oil production in this country, which will have the perhaps inadvertent result of ensuring the US remains oil-independent even though the market can’t justify fracking right now.

The CIA is institutionally quite close with the Saudis right now, and has been in charge of their covert war against Assad.

This story came 24 days after the White House released an anonymous statement asserting, among other things, “the Federal government did not observe any increased level of malicious cyber activity aimed at disrupting our electoral process on election day,” suggesting that the Russians may have been deterred.
This story was leaked within hours of the time the White House announced it was calling for an all-intelligence community review of the Russia intelligence, offered without much detail. Indeed, this story was leaked and published as an update to that story.

Which is to say, the CIA and/or people in Congress (this story seems primarily to come from Democratic Senators) leaked this, apparently in response to President Obama’s not terribly urgent call to have all intelligence agencies weigh in on the subject of Russian influence, after weeks of Democrats pressuring him to release more information. It was designed to both make the White House-ordered review more urgent and influence the outcome.
So here’s what that story says.

In September, the spooks briefed “congressional leaders” (which for a variety of reasons I wildarseguess is either a Gang of Four briefing including Paul Ryan, Nancy Pelosi, Mitch McConnell, and Harry Reid or a briefing to SSCI plus McConnell, Reid, Jack Reed, and John McCain). Apparently, the substance of the briefing was that Russia’s intent in hacking Democratic entities was not to increase distrust of institutions, but instead to elect Trump.

The CIA has concluded in a secret assessment that Russia intervened in the 2016 election to help Donald Trump win the presidency, rather than just to undermine confidence in the U.S. electoral system, according to officials briefed on the matter.

The difference between this story and other public assessments is that it seems to identify the people — who sound like people with ties to the Russian government but not necessarily part of it — who funneled documents from Russia’s GRU to Wikileaks.

Intelligence agencies have identified individuals with connections to the Russian government who provided WikiLeaks with thousands of hacked emails from the Democratic National Committee and others, including Hillary Clinton’s campaign chairman, according to U.S. officials. Those officials described the individuals as actors known to the intelligence community and part of a wider Russian operation to boost Trump and hurt Clinton’s chances.
[snip]

[I]ntelligence agencies do not have specific intelligence showing officials in the Kremlin “directing” the identified individuals to pass the Democratic emails to WikiLeaks, a second senior U.S. official said. Those actors, according to the official, were “one step” removed from the Russian government, rather than government employees.

This is the part that has always been missing in the past: how the documents got from GRU, which hacked the DNC and John Podesta, to Wikileaks, which released them. It appears that CIA now thinks they know the answer: some people one step removed from the Russian government, funneling the documents from GRU hackers (presumably) to Wikileaks to be leaked, with the intent of electing Trump.
Not everyone buys this story. Mitch McConnell doesn’t buy the intelligence.

In September, during a secret briefing for congressional leaders, Senate Republican Leader Mitch McConnell (Ky.) voiced doubts about the veracity of the intelligence, according to officials present.

That’s one doubt raised about CIA’s claim — though like you all, I assume Mitch McConnell shouldn’t be trusted on this front.

But McConnell wasn’t the only one. One source for this story — which sounds like someone like Harry Reid or Dianne Feinstein — claimed that this CIA judgment is the “consensus” view of all the intelligence agencies, a term of art.

“It is the assessment of the intelligence community that Russia’s goal here was to favor one candidate over the other, to help Trump get elected,” said a senior U.S. official briefed on an intelligence presentation made to U.S. senators. “That’s the consensus view.”

Except that in a briefing this week (which may have been what impressed John McCain and Lindsey Graham to do their own investigation), that’s not what this represented.

The CIA shared its latest assessment with key senators in a closed-door briefing on Capitol Hill last week, in which agency officials cited a growing body of intelligence from multiple sources. Agency briefers told the senators it was now “quite clear” that electing Trump was Russia’s goal, according to the officials, who spoke on the condition of anonymity to discuss intelligence matters.

The CIA presentation to senators about Russia’s intentions fell short of a formal U.S. assessment produced by all 17 intelligence agencies. A senior U.S. official said there were minor disagreements among intelligence officials about the agency’s assessment, in part because some questions remain unanswered. [my emphasis]

Remember: we went to war against Iraq, which turned out to have no WMD, in part because no one read the “minor disagreements” from a few agencies about some aluminum tubes. A number of Senators who didn’t read that footnote closely (and at least one that did) are involved in this story. What we’re being told is there are some aluminum tube type disagreements.

Let’s hear about those disagreements this time, shall we?

Here’s the big takeaway. The language “a formal US assessment produced by all 17 intelligence agencies” is, like “a consensus view,” a term of art. It’s an opportunity for agencies which may have differing theories of what happened here to submit their footnotes.

That may be what Obama called for today: the formal assessment from all agencies (though admittedly, the White House purposely left the scope and intent of it vague).

Whatever that review is intended to be, what happened as soon as Obama announced it is that the CIA and/or Democratic Senators started leaking their conclusion. That’s what this story is.

Update: One other really critical detail. When the White House announced the Obama review today, Wikileaks made what was a bizarre statement. Linking to a CNN story on the Obama ordered review that erred on the side of blaming Russia for everything, it said, “CNN: Obama orders report into WikiLeaks timed for release just prior to Trump presidency.” Even though none of the statements on the review focused on what this story does — that is, on the way that the DNC and Podesta emails got to Wikileaks — Wikileaks nevertheless interpreted it as an inquiry targeted at it.

Update: And now David Sanger (whose story on the Obama-ordered review was particularly bad) and Scott Shane reveal the RNC also got hacked, and it is the differential leaking that leads the spooks to believe the Russians wanted Trump to win.

They based that conclusion, in part, on another finding — which they say was also reached with high confidence — that the Russians hacked the Republican National Committee’s computer systems in addition to their attacks on Democratic organizations, but did not release whatever information they gleaned from the Republican networks.
In the months before the election, it was largely documents from Democratic Party systems that were leaked to the public.

This may be a fair assessment. But you would have to account for two things before making it.

NYT now says the RNC hack was by GRU in the spring, so it is a fair question why the DNC things got leaked but RNC did not.

Also, Sanger and Shane say “largely documents” from Dems were leaked. That’s false. There were two streams of non-Wikileaks releases, Guccifer, which did leak all-Dem stuff, and DC Leaks, which leaked stuff that might be better qualified as Ukrainian related. The most publicized of documents from the latter were from Colin Powell, which didn’t help Trump at all.

Update: It’s clear that Harry Reid (who of course is retiring and so can leak speech and debate protected classified information without worrying he’ll be shut off in the future) is one key driver of this story. Last night he was saying, “”I was right. Comey was wrong. I hope he can look in the mirror and see what he did to this country.” This morning he is on the TV saying he believes Comey had information on this before the election.
-------------------------

FBI sent planeload of agents to frame Assange in Iceland, got snubbed by minister

The US sent a “planeload of FBI agents” to Iceland in 2011 to frame WikiLeaks and its co-founder Julian Assange, according to a former Icelandic minister of interior, who refused them any cooperation and asked them to cease their activities.

In June 2011, Obama administration implied to Iceland's authorities they had knowledge of hackers wanting to destroy software systems in the country, and offered help, then-Interior Minister Ogmundur Jonasson, said in an interview with the Katoikos publication.

However, Jonasson said he instantly became “suspicious” of the US good intentions, “well aware that a helping hand might easily become a manipulating hand.” 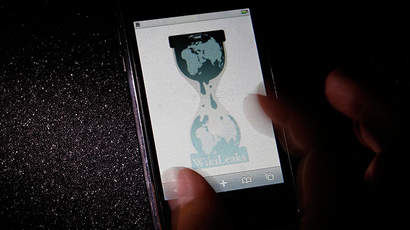 ​WikiLeaks still under investigation, but not its supporters, says DOJ
Later in the summer 2011, the US “sent a planeload of FBI agents to Iceland seeking our cooperation in what I understood as an operation set up to frame Julian Assange and WikiLeaks,” Jonasson said.

Icelanders seemed like a tough nut to crack, though.

“Since they had not been authorized by the Icelandic authorities to carry out police work in Iceland and since a crack-down on WikiLeaks was not on my agenda, to say the least, I ordered that all cooperation with them be promptly terminated and I also made it clear that they should cease all activities in Iceland immediately,” the politician said.

So the US were told to leave, and moreover, the politician made things quite clear for them.

“If I had to take sides with either WikiLeaks or the FBI or CIA, I would have no difficulty in choosing: I would be on the side of WikiLeaks,” he said.

Jónasson went on to discuss other whistleblowers like Edward Snowden: the Althing, the Icelandic parliament, debated whether Snowden should have been granted citizenship, but “there hasn't been political consensus” on the matter.
“Iceland is part of NATO and such a decision would be strongly objected to by the US,” Jonasson said.

Both whistleblowers have spent several years under protection: Assange has been staying in the Ecuadorian Embassy in London for about four years, while Snowden was granted asylum in Russia in 2013, and he is still staying at an undisclosed location there.
Posted by Deuce ☂ at 12/10/2016 05:36:00 PM