"The Macedonians Are Coming to Take Me Away, Oh No!" 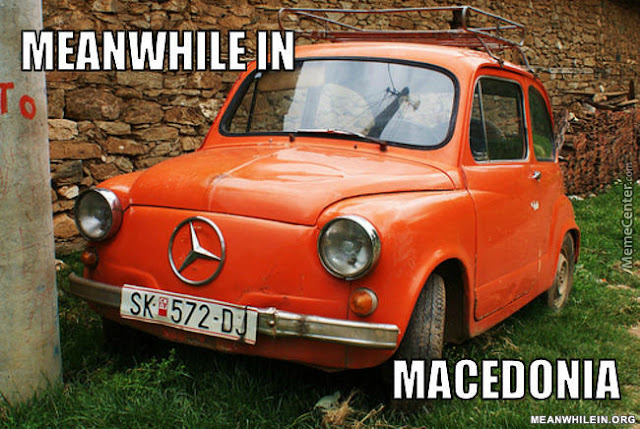 “I assume that a lot of the people here,” Hillary  began, “and if you haven’t, I hope you will, read the declassified report by the intelligence community that came out in early January.”
“Seventeen agencies, all in agreement,” she explained, “which I know from my experience as a senator and a secretary of state is hard to get – they concluded with high confidence that the Russians ran an extensive information war campaign against my campaign to influence voters in the election.”
“They did it through paid advertising, we think,” she continued, “they did it through false news sites, they did it through these thousand agents, they did it through ‘machine learning,’ which you know kept spewing out this stuff over and over again, the algorithms that they developed.”

“Now, so that was the conclusion,” Clinton said. “And I think it’s fair to ask, how did that actually influence the campaign, and how did they know what messages to deliver? Who told them? Who were they coordinating with, or colluding with?”
“Because the Russians historically in the last couple of decades,” she added, “and then increasingly, you know, are launching cyber-attacks and they are stealing vast amounts of information and a lot of the information they’ve stolen, they’ve used for internal purposes to affect markets, to affect the intelligence services, et cetera.”

“So this was different because they went public,” Clinton continued, “and they were conveying this weaponized information and the content of it, and they were running, y’know there’s all these stories, about y’know, guys over in Macedonia who are running these fake news sites, and you know I’ve seen them now, and you sit there and it looks like you know sort of low level CNN operation, or a fake newspaper.”
“So the Russians, in my opinion and based on the intel and counter-intel people I talk to,” she concluded, “could not have known how best to weaponize that information unless they had been guided.”
“Guided by Americans,” her interviewer clarified.
“Guided by Americans and guided by people who had y’know, polling,” she agreed.
Clinton has been addressing the surprising loss of her campaign, but this appears to be the first time she’s alluded to the idea that associates of the Trump campaign colluded with Russian officials in their interference. Her reference to people in Macedonia had to do a Buzzfeed article outlining how foreign “fake news” entrepreneurs discovered they could cash in on ad revenue from writing salacious and false stories that were fed to American news consumers.
Clinton blamed misogyny for her loss at the tech conference, saying that many voters were simply not ready to accept a woman as a president, and also dismissed the email scandal as a “nothing burger.”
YOU BETTER TAKE A PISS BEFORE YOU WATCH THIS: