Spending some two years under siege by al-Qaeda and its allied forces in Idlib Province, Shi’ite civilians from the towns of Foua and Kfraya began a mass evacuation as part of the “town swap”  deal, but didn’t get far outside of Idlib before they were attacked in a massive car bombing which killed at least 100 people.

The convoy of buses were heading into government territory, but were targeted with the huge explosion in a rebel-controlled area outside of Aleppo. The attack reportedly killed not only a large number of civilians in the convoy, but between 20 and 30 rebels who were present to “guard” the convoy.

The whole population transfer is apparently in limbo after the blast, with rebels accusing the government of “violating” the deal by not sending enough security to escort the rebel fighters and their families out of the towns near Lebanon which are being evacuated on the other side of the deal. As a result, the rebels had stopped the Shi’ite convoy at the time of the attack.

This means that in the wake of the attack, and its huge casualties, thousands of Shi’ites are basically stranded in rebel-held territory not particularly far from the towns they were forced to abandon, and while the Red Crescent is providing food while they wait, many say they’ve been gone for some 30 hours, and have no access to toilets.

Despite this being a bombing attack on pro-government Shi’ites in a rebel-held area, the rebels were quick to blame the Syrian military for the attacks, calling for international intervention against them .

DON'T BELIEVE FOR A SECOND THESE EVENTS ARE NOT CONNECTED

The death toll from a bomb blast on a crowded Syrian bus convoy outside Aleppo reached at least 112 people, the Syrian Observatory for Human Rights monitoring group said on Sunday.
Syrian rescue workers the Civil Defence said that they had carted away at least 100 bodies from the site of Saturday's blast, which hit buses carrying Shi'ite residents as they waited to cross from rebel into government territory in an evacuation deal between warring sides.


The British-based Observatory said the number was expected to rise. 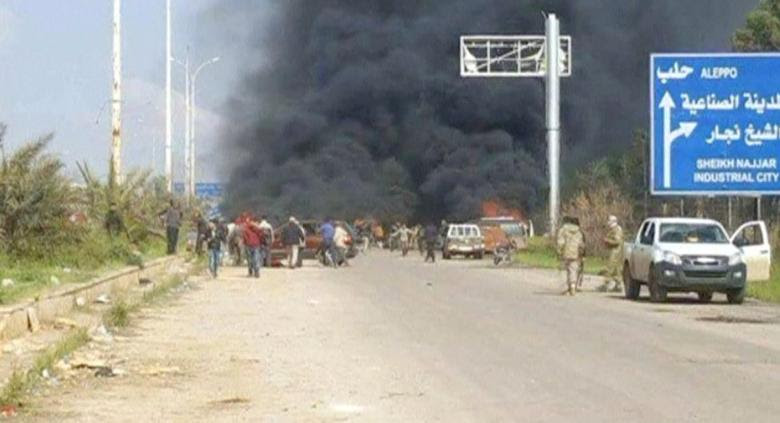 Those killed were mostly residents of the villages of al-Foua and Kefraya in Idlib province, but included rebel fighters guarding the convoy, the Observatory said.


There was no immediate claim of responsibility for the attack, which pro-Damascus media said was carried out by a suicide car bomber.

The convoy was carrying at least 5,000 people including civilians and several hundred pro-government fighters, who were granted safe passage out of the two Shi'ite villages which are besieged by rebels.

Under the evacuation deal, more than 2,000 people including rebel fighters were granted safe passage out of Madaya, a town near Damascus besieged by government forces and their allies.

That convoy was waiting at a bus garage in a government-held area on Aleppo's outskirts, a few miles from where the attack took place. Madaya evacuees said they heard the blast.