The Dishonest and Corrupt US Media is Enabling False Flag Setups - Why?

The Chemical-Weapons Attack In Syria: Is There a Place for Skepticism?

The American media has excluded dissenting expert opinions in its rush to embrace Trump’s war on Syria. 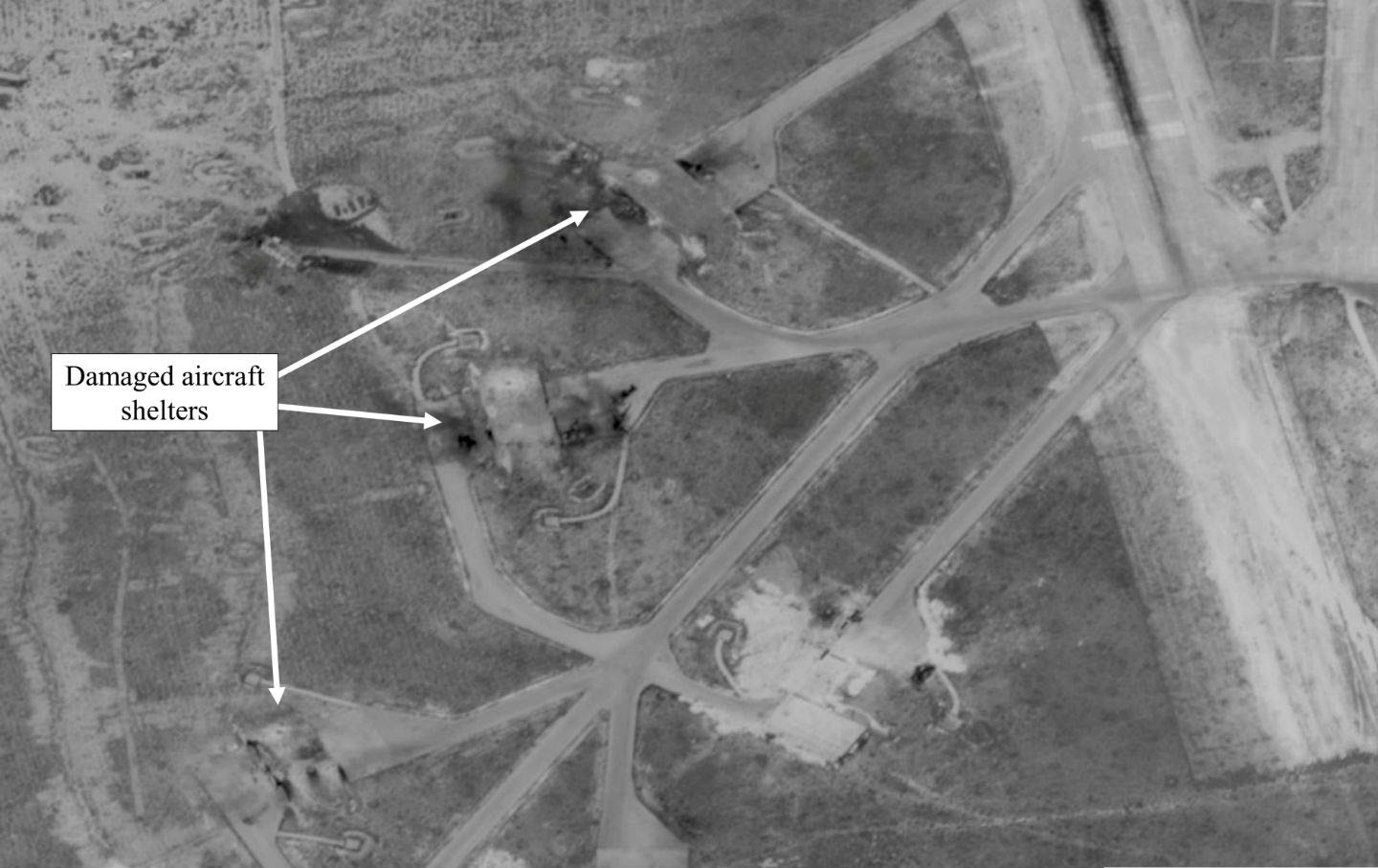 The Pentagon’s damage-assessment image of Syria’s Shayrat airfield following the US missile strike on April 7, 2017. (Photo courtesy of US Department of Defense / DigitalGlobe)
In addition to highlighting the embarrassing degree to which the American media is seduced by displays of American military might, its rush to embrace President Trump’s decision to launch a military attack against Syria on April 6 has also crowded out dissenting voices from the administration’s claim that it was the government of Bashar al-Assad that was responsible for the chemical-weapons attack in Khan Sheikhun, which killed over 80 people and injured hundreds.
By firing 59 Tomahawk missiles at the Shayrat air base in Syria, and killing five Syrian soldiers and nine civilians in the process, President Trump was able to transform himself in the eyes of the media from an object of derision into, in the words of erstwhile Trump critic Elliot Abrams, “Leader of the Free World.”

Dissent from what amounts to a new party line has been noticeably absent. As the investigative journalist Robert Parry recently observed, “All the Important People who appeared on the TV shows or who were quoted in the mainstream media trusted the images provided by Al Qaeda–related propagandists and ignored documented prior cases in which the Syrian rebels staged chemical weapons incidents to implicate the Assad government.”

Former British ambassador to Syria Peter Ford told the BBC last week that he seriously doubted that Assad was the culprit. “Assad,” said Ford, “may be cruel, brutal but he’s not mad. It defies belief that he would bring this all on his head for no military advantage.” Ford said he believes the accusations against Syria are “simply not plausible.”

And so, on what evidence and intelligence was Trump’s decision based upon?
On April 11, the White House released a declassified four-page report meant to prove its case against Assad and serve as a belated justification for the Tomahawk attack on Syria’s Shayrat air base.

The report, which was authored not by US intelligence agencies but by the White House under the supervision of national-security adviser H.R. McMaster, says that “The United States is confident that the Syrian regime conducted a chemical weapons attack, using the nerve agent sarin, against its own people in the town of Khan Shaykhun in southern Idlib Province on April 4, 2017.”

The report relies on “open source” videos for proof of its claim that a “chemical munition landed not on a facility filled with weapons,” as the Russians and Syrians have claimed, “but in the middle of a street in the northern section of Khan Shaykhun. Commercial satellite imagery of that site from April 6, after the allegation, shows a crater in the road that corresponds to the open source video.”
Yet the administration’s report has come under withering scrutiny from Dr. Theodore Postol, a professor emeritus of science, technology, and national-security policy at the Massachusetts Institute of Technology, who once served as a scientific adviser to the chief of naval operations at the Pentagon.

Postol’s exhaustive critique of the White House report notes that “The only undisputable facts stated in the White House report is the claim that a chemical attack using nerve agent occurred in Khan Shaykhun, Syria.” And yet, according to Postol, “the report contains absolutely no evidence that this attack was the result of a munition being dropped from an aircraft. In fact, the report contains absolutely no evidence that would indicate who was the perpetrator of this atrocity.”

Postol writes that “The only source the document cites as evidence that the attack was by the Syrian government is the crater it claims to have identified on a road in the North of Khan Shaykhun.” Yet his analysis of the photographs of the crater provided by the White House “clearly indicates that the munition was almost certainly placed on the ground with an external detonating explosive on top of it that crushed the container so as to disperse the alleged load of sarin.”

And so, “In order to cover up the lack of intelligence to supporting the president’s action, the National Security Council produced a fraudulent intelligence report.” Postol concludes that the “report is completely undermined by a significant body of video evidence taken after the alleged sarin attack and before the US cruise missile attack that unambiguously shows the claims in the WHR [White House Report] could not possibly be true.”

The Nation spoke to Postol over the weekend.

“What I think is now crystal clear,” he said, “is that the White House report was fabricated and it certainly did not follow the procedures it claimed to employ.”
“My best guess at the moment is that this was an extremely clumsy and ill-conceived attempt to cover up the fact that Trump attacked Syria without any intelligence evidence that Syria was in fact the perpetrator of the attack…. It may be,” he continued, “that the White House staff was worried that this could eventually come out—a reckless president acting without regard to the nation’s security, risking an inadvertent escalation and confrontation with Russia, and a breakdown in cooperation with Russia that would cripple our efforts to defeat the Islamic State.”

“If that is not an impeachable offense,” Postol told The Nation, “then I do not know what is.”

It is entirely possible, of course, that dissenting voices like Postol’s and Ambassador Ford’s may ultimately be proved wrong, and that Assad was indeed behind the chemical-weapons attack.

Indeed, if it is true, as CNN reported on April 13, that the “US military and intelligence community has intercepted communications featuring Syrian military and chemical experts talking about preparations for the sarin attack in Idlib,” then that would be hard, if not impossible, to explain away. Meanwhile, US officials are not backing away from their claim that there is “no doubt” that the Syrian government ordered the attack.

But at this early stage, questions such as those posed by Postol and Ford should be aired by the US media, not ignored. And, given that the US intelligence community has seemingly kept its distance from the administration’s claims, a serious investigation into what exactly took place is all the more necessary.
Robert Parry writes, “it remains a mystery why this intelligence assessment is not coming directly from President Trump’s intelligence chiefs as is normally the case, either with an official Intelligence Estimate or a report issued by the Director of National Intelligence.”

Philip Giraldi, a former CIA case officer and Army intelligence officer, told radio host Scott Horton on April 6 that he was “hearing from sources on the ground in the Middle East, people who are intimately familiar with the intelligence that is available, who are saying the essential narrative we are hearing about the Syrians and Russians using chemical weapons is a sham.”

Giraldi also noted that “people in the both the agency [CIA] and in the military who are aware of the intelligence are freaking out about this because essentially Trump completely misrepresented” what had taken place in Khan Sheikhun. Giraldi reports that his sources in the military and the intelligence community “are astonished by how this is being played by the administration and by the US media.”

Given the seriousness of the questions raised by Giraldi, one can’t help but wonder if the administration’s motives for launching the missile strike were motivated by considerations other than those which they have aired thus far. What exactly was the rush? The findings of an investigation into the attack by the Organisation for the Prohibition of Chemical Weapons is expected to be released in only two weeks’ time.

In the meantime, according to a report from the April 5 meeting of the UN Security Council, the UN’s high representative for disarmament affairs, Kim Won-soo, informed the Council that “the information on the reported 4 April use of chemical weapons in Khan Shaykhun, in Syria’s Idlib Governorate, was still coming in.” The high representative could also not confirm who carried out the attack, though both sides of the six-year-long Syrian war have been repeatedly accused of using chemical weapons.

Yet in spite of all this, Trump, perhaps sensing political advantage, rushed to execute a unilateral and illegal military response. The fact that he did so raises serious questions about his judgment, as well as the judgment of all the pundits who applauded him.

But perhaps the enthusiasm that greeted Trump’s missile strike was misplaced. Ambassador Ford warns that “Trump has just given the jihadis a thousand reasons to stage fake flag operations, seeing how successful and how easy it is with a gullible media to provoke the West into intemperate reactions.”

It hardly needs saying that highlighting these dissenting voices is not tantamount to excusing Assad’s heinous human-rights record or his previous attacks, which have killed countless innocent Syrians. Rather, it is to draw attention to the failure of the US media, which has once again abdicated its responsibilities by ignoring the serious questions and allegations raised by Postol, Giraldi, and Ford about the White House’s intelligence relating to the chemical-weapons attack in Syria.
Posted by Deuce ☂ at 4/23/2017 04:36:00 AM