Check out the guy in the black shirt, third from left (to left of Crash). 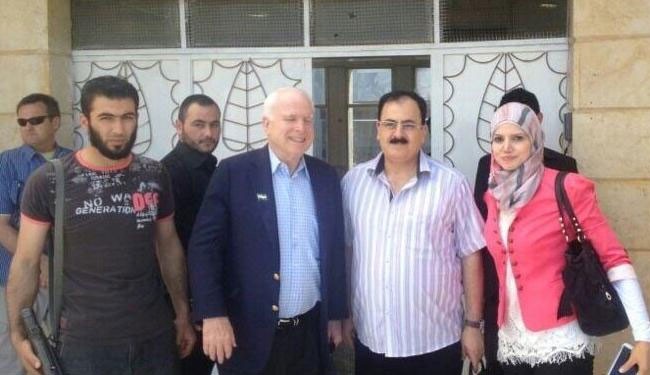 As many as 670 prisoners thought killed in Mosul with other abuses reported in Iraq amounting to 'crimes against humanity'
Luke Harding and Fazel Hawramy in Irbil
The Guardian, Monday 25 August 2014 14.24 EDT
The United Nations said on Sunday it had evidence that fighters from Islamic State (Isis) had killed as many as 670 prisoners in Mosul and had carried out further abuses in Iraq that amounted to crimes against humanity.
Navi Pillay, the UN high commissioner for human rights, said Islamic State and allied fighters were committing "grave, horrific human rights violations" on a daily basis. These included, including targeted killings, forced conversions, abductions, trafficking, slavery and sexual abuse, Pillay said.
The jihadists, who are consolidating their control of northern and eastern Iraq, have also destroyed religious and cultural monuments and have laid siege to whole communities, Pillay said. "They are systematically targeting men, women and children based on their ethnic, religious or sectarian affiliation and ruthlessly carrying out widespread ethnic and religious cleansing in the areas under their control."
Pillay gave fresh details of an alleged massacre carried out on 10 June by Islamic State extremists. The fighters had just taken control of Mosul, Iraq's second biggest city, after the Iraqi army fled. About 3,000 inmates were being kept in Mosul's Badoush prison. During the power vacuum some managed to escape from minimum security areas, but between 1,000 and 1,500 remained after many had escaped during the chaos.
Citing testimony from eyewitnesses and survivors, the UN said Islamic State gunmen arrived at the front gate in a group of pick-up trucks. Several carried machine guns. They took out the prisoners and sorted them into two groups, Sunni and 670 Shias. The fighters grilled the Sunni group, asked them to recite prayers, and interrogated them about family backgrounds. Some Shia prisoners tried to pass themselves off as Sunni. They were discovered and returned to the Shia line-up.
The Islamic State militants told their Shia captives they would be "released" once their identities were verified. The prisoners had to give a number in turn – beginning with one, with the last prisoner saying: "I'm 679". The fighters then loaded the them into trucks and drove three to four kilometres south-east to an uninhabited "desert-like location", somewhere between Mosul's main road and its railway line.
According to the UN, the prisoners were lined up in four rows. They were told to kneel, and then shot. The UN said a handful survived by playing dead. It said it conducted extensive interviews with 20 survivors of the massacre and 16 further witnesses, with evidence taken in Irbil, the capital of Iraqi Kurdistan, and Basra.
"Such cold-blooded, systematic and intentional killings of civilians, after singling them out for their religious affiliation may amount to war crimes and crimes against humanity," Pillay said on Monday.
The mass execution in June was merely the latest to have taken place in Mosul. According to Amnesty International, Iraqi government forces also massacred Sunni prisoners in several cities, including Mosul, before retreating in the face of the rapid Isis advance.
Kurdish officials in Irbil confirmed that Islamic State had separated Sunni and Shia inmates after taking over Badoush and other prisons. They said that some Shia prisoners from Badoush were killed by Islamic State, with Sunnis freed after swearing allegiance to Isis. But they raised doubts that the figure was as high as 670. Fewer may have been executed, they suggested.
Residents inside Mosul, meanwhile, said that local Islamic State fighters were looting houses belonging to Christians and other minorities on a daily basis. They said the militants were also forcing locals to give allegiance to the group, which declared an Islamic caliphate in June. They added that young men were terrified of going out onto the street because the group was desperately looking for new recruits and there was a danger they might be seized.


One resident said the city had ground to a halt. Resentment was growing, and the Islamic State was incapable of administering the city, he said.
Posted by Deuce ☂ at 8/25/2014 03:30:00 PM