The youth jobless rate has reached 58% in Greece, 55.8% in Spain, 39.1% in Portugal, 36.5% in Italy, 30.1% in Slovakia, and 25.5% in France: The failure of EMU policy is now undeniable. Whole societies have been broken on the wheel. Yet there has not been any substantive shift in strategy. The EU authorities remain adamant that the next bayonet charge will deliver victory. 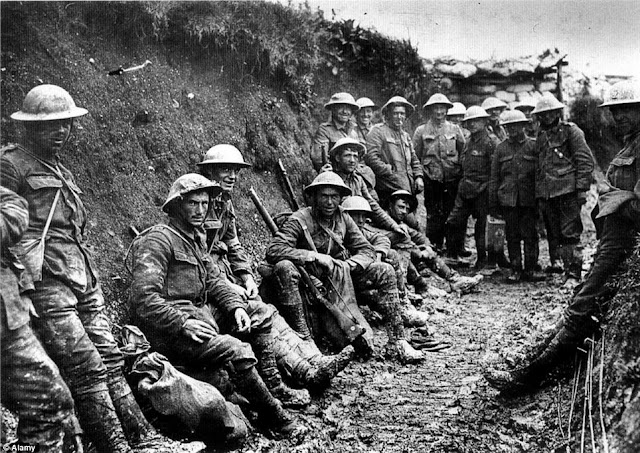 Like the generals of the First World War, Europe’s leaders seem determined to send wave after wave of their youth into the barbed wire of tight money, bank deleveraging, and fiscal austerity a l’outrance.

The strategy of triple-barreled contraction across a string of inter-linked countries has been the greatest policy debacle since the early 1930s. The outcome over the last three years has been worse than forecast at every stage, and in every key respect.

The eurozone has crashed back into double-dip recession. It will contract a further 0.3pc next year, according to a chastened European Central Bank. The ECB omitted mention of its own role in this fiasco by allowing all key measures of the money supply to stall in mid-2012, with the time-honoured consequences six months to a year later.

The North has been engulfed at last by the contractionary holocaust it imposed on the South. French car sales crashed 19pc last month, even before its fiscal shock therapy -- 2pc of GDP next year. The Bundesbank admitted on Friday tore up its forecast on Friday. Germany itself is in recession.

The youth jobless rate has reached 58pc in Greece, 55.8pc in Spain, 39.1pc in Portugal, 36.5pc in Italy, 30.1pc in Slovakia, and 25.5pc in France, with all the known damage this does to the life-trajectory of the victims and the productive dynamism of these economies.

EU policy elites blame "labour rigidities". The United Nation’s economic arm UNCTAD counters that the EU demand for "wage compression" is itself perpetuating the crisis.
The labour share of total income has fallen to a 60-year low, eating away at demand. This is a formula for perma-slump. In a thinly veiled attack on Berlin, Frankfurt, and Brussels, the UN decried the "political blockade" against any solution to the crisis. It mocked the "discredited mantra" of flexible labour markets. Well, at least somebody is exposing the lie.

The International Monetary Fund’s latest work on the `fiscal multiplier’ has largely demolished the credibility of EMU fiscal policy. Austerity takes a greater toll on GDP during a deleveraging crisis than originally thought, doubly or triply so in countries that cannot devalue or cushion the blow with monetary stimulus.

As constructed so far, the policy has been largely self-defeating even on its own terms. Debt dynamics are deteriorating at a frightening pace across half Europe. The IMF’s Fiscal Monitor says Italy’s public debt (128pc). It will be 4pc of GDP higher next year than estimated as recently as April. It will be 8.4pc for higher in Portugal (124pc), and 12.9pc higher in Spain (97pc).
This is what a depression will do to you, and is in fact what happened to Britain in the 1920’s when combined fiscal and monetary tightening pushed public debt to 190pc. The cure was emancipation from the dollar peg (Gold Standard) in 1931, an emancipation that Britain’s status quo elites ruled out as too dangerous to contemplate.

The failure of EMU policy is now undeniable. Whole societies have been broken on the wheel. Yet there has not been any substantive shift in strategy. The EU authorities remain adamant that the next bayonet charge will deliver victory.

Currency Commissioner Olli Rehn says "the worst is over," citing a cut in the combined deficits from 6.2pc of GDP to 3pc over the last two years. The alleged achievement is of course the crime. As the Maynard Keynes wrote in 1931, deficits in a slump are "nature’s remedy from preventing business losses being so great as to bring production altogether to a standstill."

Mr Rehn’s fiscal overkill should not have occurred in a balance-sheet crisis when households and companies are deleveraging feverishly. It is being done to meet an arbitrary target set by the EU bureaucracy, with no regard for the therapeutic dose.
In Britain we at least have a roaring policy debate. Personally, I support the Coalition’s cuts: tightening is well-paced at 1pc of GDP each year. It is cushioned by quantitative easing. Britain has a big current account deficit (unlike Euroland), and is therefore not morally obliged to offer the world reciprocal demand (unlike Germany with a 6.4pc surplus this year). But I am thankful that we have an opposition Labour Party and the pugnacious Ed Balls fighting the policy every day. The nation can hear the arguments. There is a choice.

No such choice yet exists in the eurozone. EMU strategy has few defenders left on the global stage. There is hardly an economist in Italy, Spain, or even France who believes that health can return under current policies. Yet there is no coherent opposition. No major party in any EMU county is willing to grasp the nettle.

Europe’s curse is that Germany has a massively undervalued exchange rate within EMU, and therefore has different needs, and yet controls the policy levers for everybody. We can argue over why this has happened. The legacy charisma of the D-Mark still counts, and so does sheer power. Creditors always hold the whip hand at the onset of a debt crisis, though not always at the end.

A wiser Germany would see that it cannot force the brunt of adjustment on the South without causing a contractionary bias for everybody. But we have a foolish Germany, spouting pre-modern economic quackery, seemingly unwilling to give up the mercantilist advantage it now holds over EMU trade partners. It resists wage inflation to close the North-South gap (understandably). It resists a debt union and fiscal transfers (understandably). Yet it also resists the only other option, which is an orderly break-up of EMU. We have a total impasse.

The Latin alliance could force an end to German-imposed contraction policies at any time by marshaling their inherent majority on the EU Council and at the ECB. They could turn the tables, compelling Berlin to yield or to withdraw from EMU. But that would require an entirely new leadership in France, willing to sacrifice the illusion of Franco-German condominium and the foreign policy catechism of the last half century. Francois Hollande dipped his toe in such waters, but recoiled.

So an odd fatalism prevails, an acceptance that Germany cannot be resisted. It falls to Italy’s Silvio Berlusconi to fulminate from the sidelines. "I can’t allow my country to plunge into an endless recessionary spiral," he said last week. He is the court clown, the only who dares to tell the truth that EMU itself is the problem, or mockingly suggests that Berlin should go back to the D-Mark and let the rest of Europe recover. The others bite their tongues.

It is true that the ECB has removed the "tail-risk" of sovereign default in Portugal, Spain, and Italy by vowing unlimited bond purchases to cap yields, once those countries surrender fiscal sovereignty. Two-year debt spreads have plummeted. Capital flight from Spain has stopped, after bleeding funds worth 40pc of GDP.

The ECB could have averted much carnage if it had stepped up to its responsibilities as a lender-of-last-resort a long time ago, but EMU politics prevented Mario Draghi from acting until euro break-up was imminent. What a way to run a railroad.

But while Mr Draghi has imposed a beguiling calm on bond markets, the economic crisis grinds deeper. The 20pc currency misalignment between North and South has been disguised by the collapse in demand across Club Med, not closed in any sustainable way.

Spanish companies still have to pay twice as much as German rivals to borrow, with the spread on five-year debt at 250 basis points. Standard & Poor’s said in a report last week that companies across Europe are still winding down exposure to Club Med to protect their credit ratings, entrenching the North-South divide.

S&P’s Jean-Michel Six said EMU has degenerated into a "customs union". The collapse of the interbank market has imposed de facto capital controls. "There are two eurozones, a northern one and a southern one," he said.
The awful risk for Europe is that all these years of EMU pain will achieve nothing, that Euroland has maneuvered into a "bad equilibrium" from which it cannot escape under the current dysfunctional system, that policy paralysis will leave the region trapped in permanent depression as the US, China, and the rest of the world moves on.

This is the message in Citigroup’s latest global outlook. Recession will drag on into 2014. "Flawed EMU structures" will hobble the region for years to come. Per capita income in Euroland (and the UK) will remain 3pc-4pc below 2007 levels in 2017. This is much worse than Japan’s Lost Decade.
America will pull further away. The growth gap between the US and EMU is 2.6pc this year, the highest since the 1990s. Citigroup said it will widen to 3.4pc in 2014 and continue at extreme levels through the decade. This will have dramatic compound effects over time. Such is the fruit of Europe’s "policy choices".

Italy faces a slow lingering death. Citigroup says the economy will contract by 1.2pc in 2013, and again by 1.5pc in 2014, with near zero growth thereafter, ending in debt restructuring anyway. France will stagnate until 2016.

If this is what lies in store, there is no further reason to hold EMU together. It should be dismantled in an orderly way after Christmas before it does any more damage.

Yet no leader seems ready to admit the Europe has been in thrall to a false religion. The grim possibility is that nothing will be done to change course until Europe is already reduced to an economic Passchendaele.
Posted by Deuce ☂ at 12/10/2012 04:52:00 AM