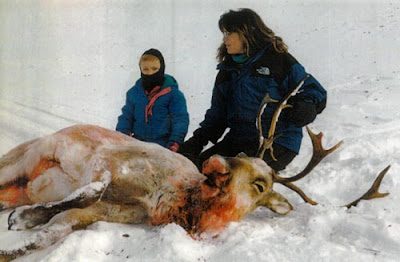 Palin is a big game hunter.

Just a quick observation on our previous post. By mid day yesterday, the New York Times had peeled off the Palin family stories one at a time. Even MSNBC criticised their total lapse of decency. The paper is a disgraced rag.

Truth is no longer relevant to most people in the United States. Image and propaganda rule. The New York Times is just another pamphlet of the left with a mission to sell their agenda.

The United States of 2008 is a torn country equally split between two very different views on society and government. The entitlement mentality has spread to the point that blacks are even threatening riot if Obama loses the election. The Republicans, for their part have done a discreditable job in their last eight years of rule. By any measure they should be thrown out of office. The problem is the offerings of Obama and Michelle are unappealing to nearly half the country.

As odd and improbable as it sounds, Sarah Palin finds herself in a pivotal historical position. It will begin or end tonight. I wish her luck.

The risk John McCain took last Friday is comparable to the 72-year-old ex-fighter pilot knocking back two shots and flying his F-16 under the Golden Gate Bridge.

McCain's choice of Alaska Gov. Sarah Palin to be his co-pilot was the biggest gamble in presidential history. As of now, it is paying off, big-time.

The sensational selection in Dayton, Ohio, stepped all over the big story from Denver -- Barack Obama's powerful address to 85,000 cheering folks in Mile High Stadium, and 35 million nationally, a speech that vaulted him from a 2-point deficit early in the week to an 8-point margin. Barack had never before reached 49 percent against McCain.

As the Democrats were being rudely stepped on, however, Palin ignited an explosion of enthusiasm among conservatives, Evangelicals, traditional Catholics, gun owners and Right to Lifers not seen in decades.

By passing over his friends Joe Lieberman and Tom Ridge, and picking Palin, McCain has given himself a fighting chance of winning the White House that, before Friday morning, seemed to be slipping away. Indeed, the bristling reaction on the left testifies to Democratic fears that the choice of Palin could indeed be a game-changer in 2008.

Liberals howl that Palin has no experience, no qualifications to be president of the United States. But the lady has more executive experience than McCain, Joe Biden and Obama put together.

None of them has ever started or run a business as Palin did. None of them has run a giant state like Alaska, which is larger than California and Texas put together. And though Alaska is not populous, Gov. Palin has as many constituents as Nancy Pelosi or Biden.

She has no foreign policy experience, we are told. And though Alaska's neighbors are Canada and Russia, the point is valid. But from the day she takes office, Palin will get daily briefings and sit on the National Security Council with the president and secretaries of state, treasury and defense.

She will be up to speed in her first year.

And her experience as governor of Alaska, dealing with the oil industry and pipeline agreements with Canada, certainly compares favorably with that of Barack Obama, a community organizer who dealt in the mommy issues of food stamps and rent subsidies.

Where Obama has poodled along with the Daley Machine, Palin routed the Republican establishment, challenging and ousting a sitting GOP governor before defeating a former Democratic governor to become the first female and youngest governor in state history.

For his boldness in choosing Palin, McCain deserves enormous credit. He has made an extraordinary gesture to conservatives and the party base, offering his old antagonists a partner's share in his presidency. And his decision is likely to be rewarded with a massive and enthusiastic turnout for the McCain-Palin ticket. Rarely has this writer encountered such an outburst of enthusiasm on the right.

In choosing Palin, McCain may also have changed the course of history as much as Ike did with his choice of Richard Nixon and Ronald Reagan did with his choice of George H.W. Bush. For should this ticket win, Palin will eclipse every other Republican as heir apparent to the presidency and will have her own power base among Lifers, Evangelicals, gun folks and conservatives -- wholly independent of President McCain.

A traditional conservative on social issues, Palin has become, overnight, the most priceless political asset the movement has. Look for the neocons to move with all deliberate speed to take her into their camp by pressing upon her advisers and staff, and steering her into the AEI-Weekly Standard-War Party orbit.

Indeed, if McCain defeats Barack, 2012 could see women on both national tickets, and given McCain's age and the possibility he intends to serve a single term, women at the top of both -- Sarah vs. Hillary.

The arrival of Palin on the national scene, with her youth, charisma and vitality, probably also portends a changing of the guard in Washington.

With Republicans having zero chance of capturing either House, and but a slim chance of avoiding losses in both, a Vice President Palin, with her reputation as a rebel and reformer, would surely inspire similar revolts in the Republican caucuses.

As Thomas Jefferson said, from time to time, a little rebellion in the political world is as necessary as storms in the physical.

The Palin nomination could backfire, but it is hard to see how. She has passed her first test, her introduction to the nation, with wit and grace. And the Obama-Biden ticket, having already alienated millions of women with the disrespecting of Hillary, is unlikely to start attacking another woman whose sole offense is that she had just been given the chance to break the glass ceiling at the national level.

Her nomination, which will bring the Republican right home, also frees up McCain to appeal to moderates and liberals, which has long been his stock in trade.

With his selection of Sarah Palin, John McCain has not only shaken up this election, he may have helped shape the future of the United States -- and much for the better.