When European Men Were Men and Not Feminized Fops 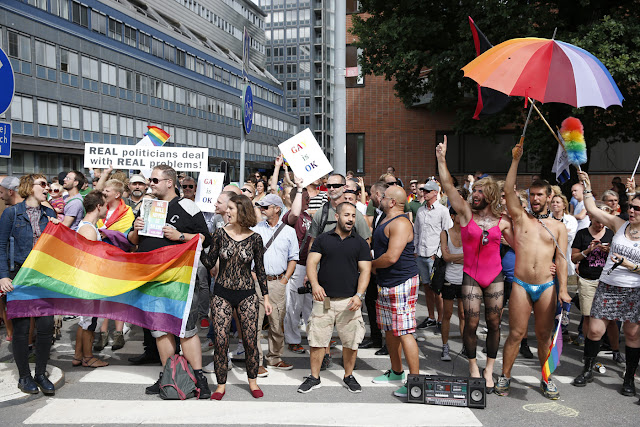 What’s Up with Rape in Sweden?

As you’ve heard, Trump referred to “[what happened] last night in Sweden.” On Twitter, smug critics circulated lists of anodyne events like concerts and road accidents and accused the president of inventing a terror attack. He didn’t cite a terror attack, though his words were characteristically imprecise. Two days later, as if to underscore that Trump had a point, riots erupted in a suburb of Stockholm.

As Andrew Brown of the Guardian put it, Sweden looms large in the “fantasies of the outside world.” It is, by turns, a socialist utopia, a sexually liberated Busch Gardens, or a Mad Max hell-scape, depending on your agenda.

Fox News and, more particularly, certain right-wing websites have been conjuring the “Idyllic Sweden destroyed by Muslim refugees” line, complete with “no go” zones, sharia law, and terror attacks. That’s an exaggeration, but so is the Washington Post’s take: “In 2015, when the influx of refugees and migrants to Europe from Africa, the Middle East and Asia was at its peak, Sweden took in the greatest number per capita. By and large, integration has been a success story there, save for incidents such as the one on Monday night.”

In fact, Sweden has been taking large numbers of refugees and immigrants for decades. They’ve accepted Balkans, Iraqis, Somalis, and many others. The Washington Post notwithstanding, there is a connection between immigration and criminality and other problems. As the Swedish economist Tino Sanandaji has noted, the employment rate for native Swedes is about 82 percent, but it’s only 58 percent for immigrants, and lower still for non-Western immigrants. Among native Swedes, the crime rate is equivalent to Iceland’s. But in immigrant-heavy neighborhoods, lawbreaking is comparable to the much higher overall rate in the U.S. (though not to the high-crime areas of U.S. cities).

Immigrants have found integration into Sweden’s homogeneous culture very difficult, partially because low-skill jobs have been disappearing as Sweden — like other countries in the developed world — de-industrializes. Though many immigrants, like Sanandaji himself, have managed the challenge, others rely on welfare-state subsidies. Joblessness and alienation have sparked riots and other antisocial behavior. At outdoor festivals such as “We Are Stockholm,” women have been groped. Public swimming pools have become venues for gangs of young immigrant men to harass women. Malmö has been losing its small Jewish population, and the Simon Wiesenthal Center issued a travel warning due to threats and attacks on Jews from Muslim immigrants.

The image of hordes of immigrants raping Swedish women, however, is, to say the least, overheated. Getting accurate statistics on rape in Sweden is difficult. On one hand, the government, in obedience to feminist diktats, has broadened the definition of rape very considerably to include many things that most Americans would not consider rape. For example, Julian Assange, for whom I have no sympathy in general, apparently ripped a condom during a consensual encounter and now hides in the Ecuadorian embassy to evade rape charges.

The number of Swedish women who say they have been the victims of sexual assault of some kind ‘in the past year’ has been rising.

On the other hand, the number of Swedish women who say they have been the victims of sexual assault of some kind “in the past year” has been rising, along with the number of women who say they have changed their habits in some way (avoiding certain areas after dark and so forth). The absolute numbers are much lower than those in the U.S., but the trend is up. Also, for those who picture blond Swedish women being preyed upon by dark-skinned foreigners, it’s important to stress that most of the women who have been victims of sexual assaults are themselves immigrants or the children of immigrants.

Tino Sanandaji cautions against the broad-brush depiction of Sweden’s immigration indigestion as a matter of Muslim influence. Some 17 percent of Swedes are foreign-born, but only 3 to 5 percent identify as Muslim. Many of the immigrants who sought refuge in Sweden from the Middle East were Maronite and Assyrian Christians. Others are atheists who were fleeing Islam. They are influenced, Sanandaji argues, more by American gangster rap and The Sopranos than by the Koran. Sweden has had only one terror attack by a Muslim extremist (who killed only himself), though that, of course, could change at any time.
Both major political parties in Sweden have minimized (even whitewashed) the burdens of being the world’s “humanitarian superpower.” The result has been the rise of the Sweden Democrats, a party whose bland name conceals a Nazi past. The party earned only 3 percent support in 2010. Today it is polling at around 18 percent.

Sweden offers many lessons, but the most critical is: Seek the truth, not a narrative.