Wesley Clark lets the cat out of the bag

“Our Friends and Allies Funded ISIS to Destroy Hezbollah”


In case there is any doubt about Israel preferring ISIS over Hezbollah, listen to former  Israeli Ambassador to the US, Michael Oren, talking to a friendly crowd. Case fucking closed.

Former US General and Supreme Allied Commander of NATO, Wesley Clark, told CNN in a recent interview that

“ISIS got started through funding from our friends and allies. People will tell you in the region that if you want somebody who will fight to the death against Hezbollah, you don’t put out a recruiting poster saying ‘sign up for us we’re gonna make a better world.’ You go after zealots and you go after these religious fundamentalists. That’s who fights Hezbollah. It’s like a Frankenstein.”

Wesley’s statements echo assertions by Israeli leaders who say that their main threat is Iran, Syria and Hezbollah, not ISIS, al-Qaeda, etc. who pose “no threat,” according to the Israelis. I wonder who told Clark that the main purpose of creating ISIS was to undermine Hezbollah, Israel’s chief rival in the region?
“Tehran-Damascus-Beirut arc is the greatest danger,” says outgoing Israeli envoy to US Michael Oren. “‘Bad guys’ backed by Iran are worse for Israel than ‘bad guys’ who are not supported by the Islamic Republic, Israel’s outgoing ambassador to the US Michael Oren told The Jerusalem Post in a parting interview.

AND JUST SO YOU DON’T FORGET WHO PAYS FOR THE NEOCON DREAM: 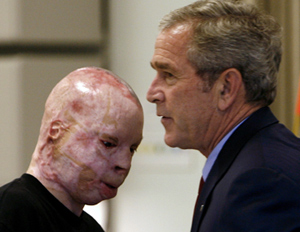